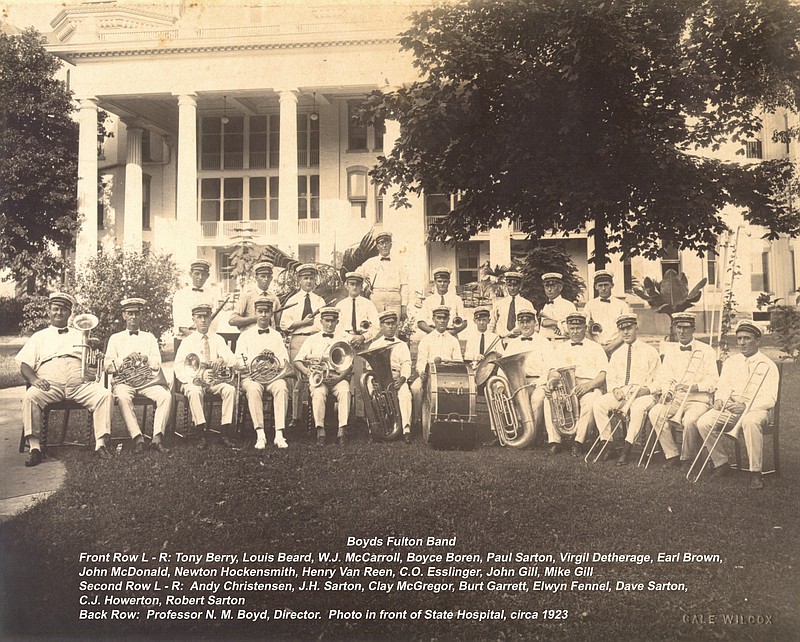 Submitted photo Boyd's Fulton Band poses for a photo in front of State Hospital, as pictured in 1923. The band director was professor N. M. Boyd.

A Big Project-Turning the Tide of the Missouri. Callaway Court has appointed two commissioners with the county surveyor to view the proposal of the erection of a dyke in the Missouri River and report to the court. They viewed the land and stated that the erection of a dyke near the line between Boone and Callaway counties was absolutely necessary for the protection of adjacent lands in Callaway County. A dyke to be extended in the Missouri river about 635 feet would, in their opinion, accomplish the desired result and change the tide of the river just above the said lands. A contract had been entered into with Logan and Stephens for the putting in of stone to the amount of 15,000 cubic yards at $1.10/cubic yard for $16,500. Boone County has agreed to pay $1,050. 70% of the remainder to be paid by the owners of the land benefitted and 30% to be paid by Callaway County. There are 4,000-5,000 acres of land in immediate danger of being swept away in the river at that place. All of which is valuable land and a great source of income to the county. If such timely precautions are not taken, Cedar City and surroundings will "be numbered with the things that were."

(From advertisement) RUPTURE! Positively and Quickly Cured. Dr. Mayer, Rupture Specialist and State Medical Director of the W.A. Lewin Rupture Cure Co., St. Louis, MO, will be at the Palace Hotel every Wednesday from 10 a.m. to 1:30 p.m. We have cured thousands of patients by our new painless and infallible method. No operation, no pain, no detention from business and no pay until cured.

House Was "Hanted." Callaway County had a famous "hanted" house during the years immediately following the Civil War in the large frame dwelling of Dr. J.M. Martien, on Grand Prairie, eight miles north of Fulton. The St. Louis Globe even printed a two-column story about the spooks inhabiting the building. Recently, Mrs. B.A. Mishler of Curlew, Iowa wrote while on a family camping trip 22 or 23 years ago, they sought permission to camp near the schoolhouse on the farm and were told by a neighbor that the house had been used as a hospital during the Civil War and was haunted by the spirits of the soldiers who died there. Sam Watson and the late J.C. Renshaw bought the house from Dr. Martien. They paid no attention to the stories. They had John Burks, who now lives near Millersburg, as a tenant of the farm and lived in the house. John told Sam that "the ghosts were there -- they crawl all over the house and our beds, even pulling the cover off of us." Prior to receiving a foundation, the house was built on posts three to four feet off of the ground. Stories circulated that the ghosts would raise the house corners off of the posts and let them fall back down. Mr. Watson merely called it a "ramshackle place and there were lots of rats in it." The house was razed by T.F. Harrison who built a two story home on site prior to selling it to Howard Muir who then sold it to a Mr. Sullivan. Joe Wallace, who has lived in the area all his life, tells of one owner moved the next day after seeing a woman in white. Another man who was caught in a neighbor's corn crib left the community after the ghosts got after him one night. Mr. Wallace smiles while talking of the latter incident saying something like a ticktack had been used by the "ghost" to frighten the man. He may know more about this "ghost" then he tells.

U.S. Sec. of Agriculture, Earl Butz, has announced approval of a proposal which would classify the Cedar Creek area of Callaway and Boone counties as a National Forest. Under the proposal, the Forestry Service will be given funds to acquire about 77,000 acres of Cedar Creek watershed area. Presently, the Forestry Service controls 13,000 acres of watershed. Gerald Greenwood, Project Manager for the Cedar Creek Management Area said that "Federal funds may not be available for the project until the following fiscal year." Jay Cravens, Regional Forester for the Eastern Region of the U.S., worked with Greenwood in organizing plans for this Nationalization.

Musical Memories. It was 'Band Night' at a Callaway County Historical Society meeting Monday night with Elwyn Fennel and Boyce Boren, the authorities on the 1920s Boyd's Fulton Band. The band played all over the county and did radio appearances in Jefferson City in the early 1920s. Fennel and Boren were members of the band and showed a picture taken in the days when Boyd's band played a concert every Thursday night on the courthouse lawn. They said everyone called N.M. Boyd, leader of the band, 'Professor Boyd,' though no one really knows why. Boyd was a barber.

(From a contributed photo) Birthday Bash. Elmer Roewe of Holts Summit was honored on Nov. 8 with a surprise birthday party and open house celebrating his 80th birthday. More than 60 people attended the party at the Tebbetts Community Hall.

Backer Helps Students to Love Reading. House Majority Leader, Gracia Backer, is reading to elementary students in Callaway County in an effort to help them develop a love for reading. Backer has visited Bartley Elementary and the Missouri School for the Deaf in Fulton, North Elementary in Holts Summit and New Bloomfield Elementary. Through the rest of this month and December, she will read to students at South Callaway Elementary in Mokane, Callaway Hills in Holt Summit, McIntire Elementary in Fulton, Auxvasse Elementary, Williamsburg Elementary and Hatton-McCredie Elementary.