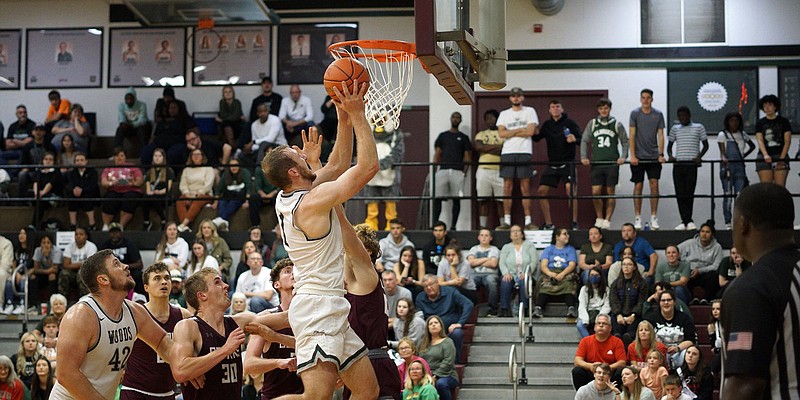 The Owls took their first lead of the game just over four minutes in with back-to-back buckets from Mike Robinson and Nathan Schwartze, 7-6. MBU went back on top, but the Owls evened the score twice.

A fast break layup from Spencer Yoggerst following Schartze's steal put the Owls back on top with 5:22 on the clock, 23-22. MBU pulled back the lead and extended it to six with a 7-0 run. The Owls went into halftime trailing by six, 31-25.

A dunk from Darius Yohe and a three from M. Robinson cut the game to four just under four minutes into the second half, 34-30.

An 8-0 Owls' run filled with two free throws from Schwartze, back-to-back dunks from Grant Peters and Fred Robinson and a jumper from F. Robinson put the team up two with 11:42 on the clock, 40-38.

MBU scored on its next two possessions, going ahead by two. The Owls evened the score twice and went ahead by two again with a Jared Crutcher jumper with 6:06 to play, 48-46.

The lead switched three times, and the Owls evened the score thrice more.

The Owls attempted a three at the buzzer to win it but missed.

Peters went 6-for-9 from the field for a floor-high 12 points. ...F. Robinson went 4-for-5 from the field and 3-for-3 from the foul line for 11 points. ...M. Robinson added 10 points to the board. ...Peters, Schwartze and Crutcher each pulled down seven boards. ...Schwartze assisted in six buckets. ...Yohe blocked three MBU shots. ...The Owls managed just two 3-pointers in the game.