Zelenskyy calls liberation of Kherson 'beginning of the end' 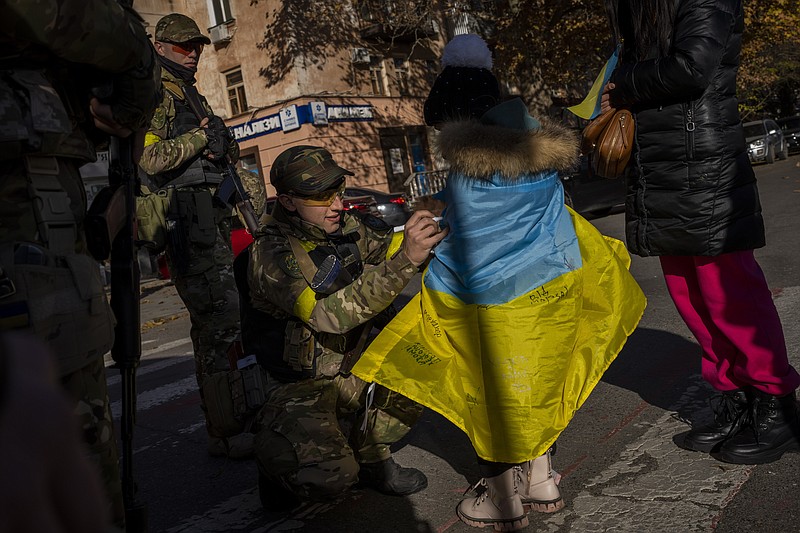 A Ukrainian defence force member signs a Ukrainian flag to a resident in Kherson, southern Ukraine, Monday, Nov. 14, 2022. The retaking of Kherson was one of Ukraine's biggest successes in the nearly nine months since Moscow's invasion. (AP Photo/Bernat Armangue)

KHERSON, Ukraine (AP) -- President Volodymyr Zelenskyy triumphantly walked the streets of the newly liberated city of Kherson on Monday, hailing Russia's withdrawal as the "beginning of the end of the war," but also acknowledging the heavy price Ukrainian troops are paying in their grinding effort to push back the invaders.

The retaking of Kherson was one of Ukraine's biggest successes in the nearly 9-month-old war, dealing another stinging blow to the Kremlin. It could serve as a springboard for more advances into occupied territory.

President Joe Biden called it a "significant victory" for Ukraine.

"I can do nothing but applaud the courage, determination and capacity of the Ukrainian people, the Ukrainian military," he said on the sidelines of a Group of 20 summit in Indonesia. "They've really been amazing. ... we're going to continue to provide the capability for the Ukrainian people to defend themselves."

Large parts of eastern and southern Ukraine are still under Russian control, and the city of Kherson itself remains within reach of Moscow's shells and missiles. Heavy fighting continued elsewhere in Ukraine. Russia's state news agency RIA Novosti reported the town of Oleshky, in Russian-held territory across the river from Kherson, came under heavy artillery fire.

In Kherson, Zelenskyy awarded medals to soldiers and posed with them for selfies while striking a defiant note.

"This is the beginning of the end of the war," he said. "We are step by step coming to all the temporarily occupied territories."

But he also grimly noted that the fighting "took the best heroes of our country."

The end of Russia's occupation of the city -- the only provincial capital seized since Russia's invasion in February -- has sparked days of celebration. But with winter approaching, its remaining 80,000 residents are without heat, water and electricity, and short on food and medicine. Zelenskyy says the city is laced with booby traps and mines. And Ukrainian authorities say there are signs of atrocities emerging, just as in other liberated areas.

The Institute for the Study of War said Ukraine has won "an important victory" in recapturing the city and other areas west of the Dnieper River, but the Washington-based think tank noted that "it has by no means liberated the minimum territory essential to its future security and economic survival."

NATO Secretary-General Jens Stoltenberg, while visiting The Hague, warned that "we should not make the mistake of underestimating Russia."

"The Russian armed forces retain significant capability as well as a large number of troops, and Russia has demonstrated their willingness to bear significant losses," he said.

In Ankara, Turkey, CIA Director Bill Burns met with his Russian intelligence counterpart, Sergei Naryshkin, to underscore the consequences if Moscow were to deploy a nuclear weapon in Ukraine, according to a White House National Security Council official.

In the past two months, Ukraine's military claimed to have retaken dozens of towns and villages north of the city of Kherson, which is a key gateway to the Crimean Peninsula to the south.

But the grinding war continued -- with shelling, civilian casualties and each side reporting gains.

The Russian Defense Ministry said its forces had completely captured the village of Pavlivka in the eastern Donetsk region. Multiple Ukrainian officials have reported heavy battles in the area in recent weeks.