Nearly a third of Missouri election administrators new to the post 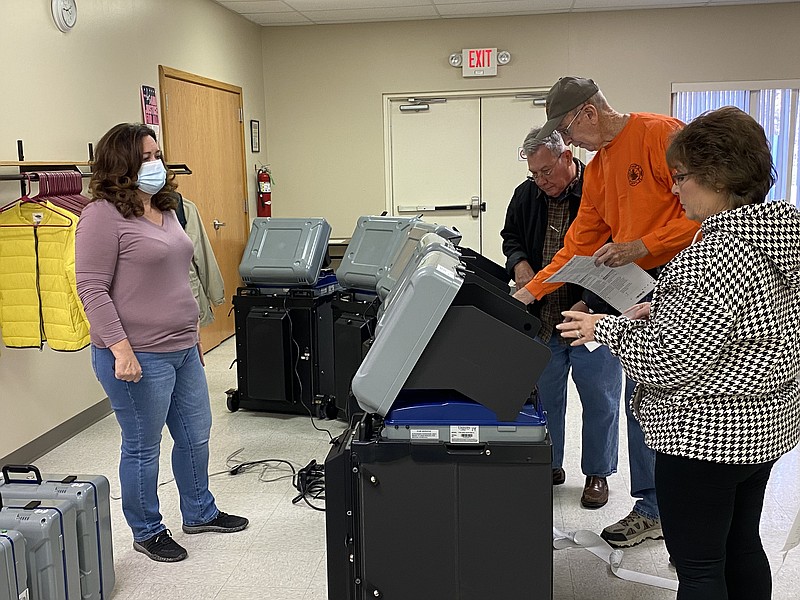 Anakin Bush/Fulton Sun photo: Ronda Miller, Callaway County Clerk, watches as sample ballots are loaded into the polling machines. This test is done to ensure the accuracy in advance of the Nov. 8, 2022, election.

As more voters and candidates in Missouri call the integrity of election results into question, nearly a third of elected officials responsible for administering elections in the state are new to the job.

It's higher than normal, according to Missouri Secretary of State Jay Ashcroft, a Republican. But he's not concerned.

"I think the new clerks will fit in just fine," Ashcroft said. "I have no reason to believe that the partisanship will somehow just spike. I haven't seen any indication that I think that will happen."

"That was a difficult time," he said. "They did a good job. It worked out well. Our elections went smoothly, but it was a very stressful time for our clerks."

"More and more things are being put on clerks and election officials, and you hear it from them," said Kara Clark Summers, president of the Missouri Association of County Clerks and Election Authorities and clerk for Cape Girardeau County. "We hear it and we all feel it too."

Summers said more scrutiny on election work likely impacted the decision of some clerks to leave the post. She said it's unfortunate.

"There have been so many challenges, especially in the most recent years," she said.

Summers said the loss of nearly a third of the state's county clerks presents a loss of experience in the field, "which is unfortunate because you want people who are experienced in doing the job. You appreciate that experience because a lot of times we rely on one another."

The secretary of state said he doesn't expect the new clerks to miss a beat upon assuming their new roles. His office and the Missouri Association of County Clerks and Election Authorities have been preparing.

The Secretary of State's Office works with the Missouri Association of County Clerks and Election Authorities to provide new clerks training.

"A lot of the new clerks are people that have worked in the clerk's office before so we think it'll be a pretty seamless transition," Ashcroft said.

State laws give county clerks significant power over elections in their county.

DOJ officials were required to stay 25 feet outside the polls, he said.

Korsmeyer, who was on the ballot Tuesday but ran unopposed, described election administration as about 75 percent of his job. As a first class county clerk, he's also responsible for Cole County Commission meeting minutes, keeping commission records, issuing liquor licenses and county payroll.

Clerks in smaller counties have fewer resources, fewer employees and tend to be responsible for more county functions, Summers said.

"Everything goes through the clerk's office," Ashcroft said of the smaller counties. "If there's a McDonald's coffee cup that's dropped on the lawn outside the courthouse, the clerk will be called about that."

County class rankings are based on assessed property value in the county, with Callaway County being a Class 2 county.

Besides the standard citizenship and residency requirements, the only qualifications someone needs to run for county clerk are to be in good standing on state taxes, not have committed a federal or state felony or federal misdemeanor, be 21 years old and not have outstanding campaign finance reports from past elections.

The job doesn't require a particular degree or professional certification.

Korsmeyer owned and operated an auto repair shop in Jefferson City for more than 30 years before he began overseeing elections in Cole County in 2015.

"Unless you've worked in the office, there is no training," he said. "There's no other job like it; it's just one of a kind. Thankfully our association hosts a new clerk training every time new clerks come in."

It's a two-day training conference set for December in Jefferson City. The association's training and mentoring committee, executive director and Summers are responsible for organizing it. The Secretary of State's Office participates as well.

Korsmeyer said it gives a good idea of what the job's all about, but "you can't learn it in one day. You just can't."

Smaller counties are usually tasked with county budgets first, Summers said, so that will be front and center during the December training. Clerks will also get a broad overview of their duties, she said.

Summers said the association also plans to have smaller training sessions throughout the year, which is new. The sessions target specific responsibilities as deadlines near over the course of the year.

"Especially for a new clerk who hasn't worked in the office before, you have a huge learning curve for your first term of office," Summers said.

"It was overwhelming when I went to training 16 years ago," she added. "It was very overwhelming at the time so we want to do a good job of providing and giving them the tools."

Challenges to training mostly center around the duties of different class counties not being the same, Summers said. She said the association tries to ensure its catering to the needs of clerks running elections in different parts of the state. It partners experienced clerks with newbies to provide mentorship, for example.

Korsmeyer described the Missouri Association of County Clerks and Election Authorities as "close-knit" and quick to cooperate. A post to the group's private Facebook page will get four or five answers pretty quickly, he said.

"There's no politics in our association," he said. "Nobody pays any attention to that because it's such a huge job."

He recalled meeting clerks when he was first elected Secretary of State in 2016 who knew each other longer than a decade but didn't know each other's party identification.

"That just wasn't how they did their job," he said. "And I love that dedication to just doing the job well, to competence, to good governance, instead of just politics."

He said doesn't expect that to change with the new crop of clerks. The state has had classes of 30 new clerks get elected in the past, he said.

But not in the past six years.

Nor in the new age of election denialism.

Three in five Americans had a candidate who denies the 2020 election results on their ballot Tuesday, according to FiveThirtyEight.com.

Nearly 200 Republicans on the ballot across the country deny President Joe Biden won the election and another 61 have raised questions about its legitimacy. The Washington Post found it was a majority of GOP candidates this year.

The election official in Maricopa County, Arizona -- which became the subject of intense election scrutiny in 2020 -- described receiving death threats in a recent interview with the New York Times.

Ashcroft called concerns over 2020 election results in some states "reasonable" because "other states hadn't followed their own laws." He said election denialism has grown over successive elections but it's inappropriate to say it's confined to a single party.

"I think it is maybe just the nature of politics now," Ashcroft said.

The secretary of state has recognized more Missourians have started questioning election results in recent years but said it should be welcomed scrutiny.

"I guess you can say most of us don't like being questioned, but we work for the public and it's the right of every red-blooded American to question your government," he said. "I think it's kind of the responsibility even."

When questioned about election results, Ashcroft said some election authorities across the state have "dug in and got defensive," which he said is wrong.

Summers said the increased scrutiny on elections is a challenge for all election administrators, including the new ones.

In Cole County, Korsmeyer said the atmosphere from voters has remained cordial, but he has noticed a heightened interest in election integrity.

"They always call and ask when they have questions, and I understand the public has questions and I don't mind answering them if they have them," he said.

When asked if it's harder to do his job with more voters' questioning their faith in election integrity, Korsmeyer said: "It has been a little chaotic, I guess. I look for it to get a little more chaotic in the next couple years with misinformation. There's a lot of misinformation out there."

He suggested always contacting local election authorities for the most accurate information about elections.

Election data is reported to the Secretary of State's Office, but county authorities are ultimately responsible for any errors in voting data, Korsmeyer said.

The primary oversight on county clerks comes from voters, Ashcroft said. His office provides funding to clerks, audits voter rolls to ensure they're current and requires them to conduct cybersecurity reviews regularly. He said his office can also investigate if incidents arise, depending on what is alleged to have happened.

When the mayor of Kansas City said he was denied the ability to vote in 2020, for example, Ashcroft said his office opened an investigation, which involved calling the board of elections (the area's local election authority) and collecting information from the poll worker to determine what happened and potential avenues for rectifying it.

Ashcroft invited Missourians critical of election results to become poll workers, watchers or challengers in future elections. He said more exposure to the system should help ease concerns about the process.

Summers said the Missouri Association of County Clerks and Election Authorities is putting a greater focus on election transparency, which she said should have been done in the past.

Time crunches have prevented it from being a top priority, she said, but clerks should take the time to make the process more clear to voters.

When he owned the auto shop, Korsmeyer said people were his favorite part about the job. The same is true in the county clerk position, but the COVID-19 pandemic has dramatically limited his interactions with voters.

"COVID has changed that personal relationship a lot for us," he said. "But, you know, I feel like it's also a safety aspect for my employees. Now we're behind locked doors and glass and stuff like that. Not just anybody can come in."

Ashcroft said the idea of so many new people stepping into the county clerk position is exciting because it shows commitment to public service.

"I like the idea of having new eyes to look at things every once in a while so I think it's good to bring in new blood just to kind of reinvigorate," he said. "For me, I guess the biggest thing is I just really appreciate that many people are willing to take on that job because in most of our counties the hardest job you can probably have is the county clerk." 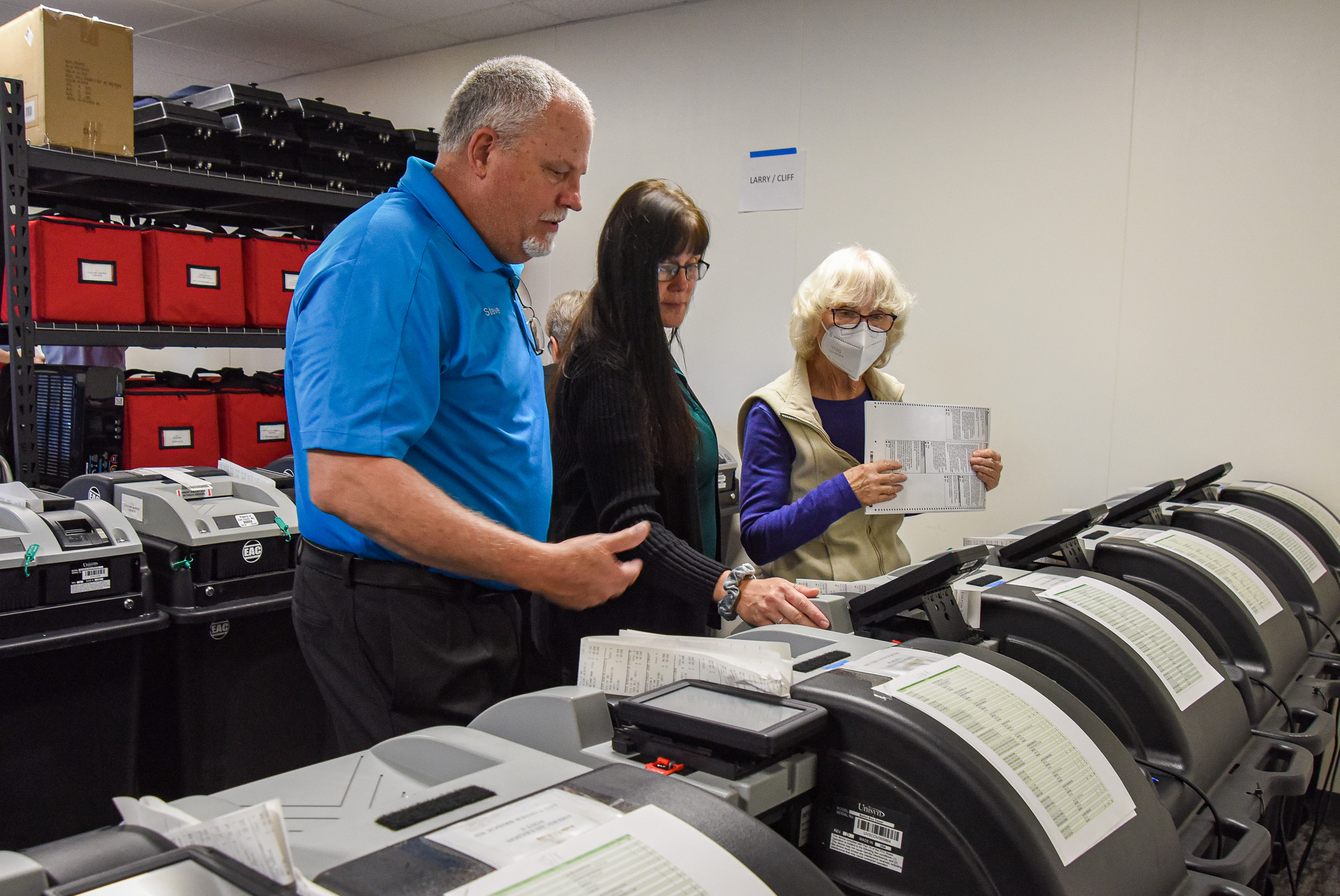