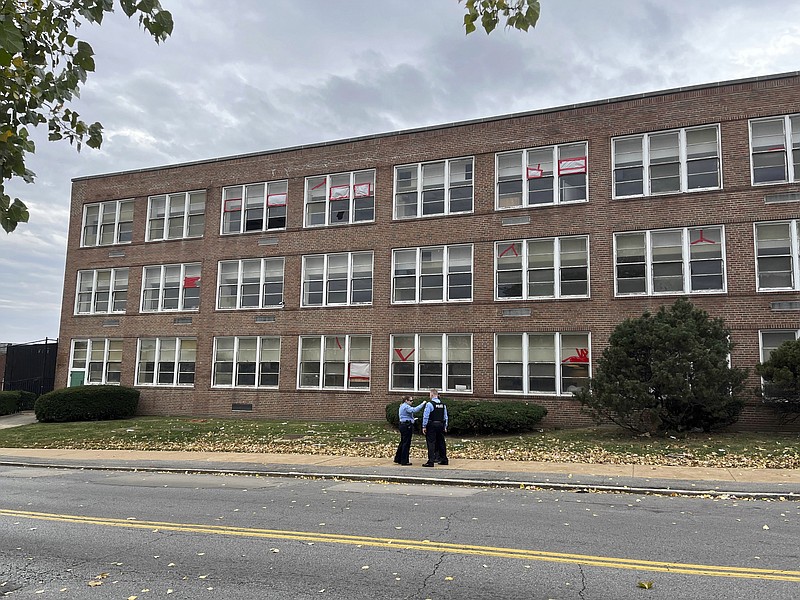 The outside of Central Visual and Performing Arts High School in St. Louis, on Monday, Oct. 24, 2022. A fatal shooting just after 9 a.m. at the high school forced students to barricade doors and huddle in classroom corners, jump from windows and run out of the building to seek safety. (AP Photo/Michael Phillis)

Within seven minutes of receiving a 911 call about an active shooter in a St. Louis high school, police and armed security guards were already in the building and engaging the suspect in gun fire.

The immediate response by police and school security on Oct. 24 at Central Visual and Performing Arts High School has drawn praise and received credit for minimizing loss of life.

However, a day after the tragedy, St. Louis Public School District officials faced questions about why the seven security guards stationed inside the school weren't armed.

"We thought it was best for us, for our officers and for the normalcy of school for kids to not have officers armed in the school," said Deandre Davis, director of safety and security for SLPS.

Armed security wouldn't have been a match for the shooter anyway, since he was carrying an AR-15-style rifle, said Matt Davis, president of the district's school board.

"The assailant had a high-powered rifle," Matt Davis said, "so much so that he could force himself into a secured building. The building is riddled with bullets. I don't know how much firepower it would take to stop that person. You saw the police response. It was massive."

Whether someone in the school should have been armed -- and if that would have made any impact whatsoever -- isn't just a question in the aftermath of last month's shooting. It will likely be a focus for state lawmakers when they return to the Capitol in January.

Right now, school districts have the option to have armed security, including allowing teachers or administrators to carry a firearm. Republican state Sen. Rick Brattin of Harrisonville said he's exploring legislation to make it mandatory.

"We need to step it up to where there's a requirement to how you're going to protect kids," Brattin said.

Republicans, who hold super majorities in both the House and Senate, have largely panned the proposals as an infringement on Second Amendment rights.

"You got a criminal that committed a criminal act, you know, and all the laws in the world are not going to stop those things," Parson said in the shooting's aftermath.

This year alone, there have been 40 school shootings across the country.

It was inevitable that a shooting would happen in Missouri, Matt Davis said, but the only solution state legislators have offered is to "harden schools" with more guns and security.

"There's how many hundreds of bills, hundreds of solutions, hundreds of things where people can come together and compromise to protect their Second Amendment rights and to protect our kids in school," Matt Davis said. "If you have the job as a politician and can write laws, and you can't think of anything to do to stop this, then do something else."

Included in a bill passed by Missouri lawmakers in 2009 was a provision giving school officials and school boards the authority to decide if a person with a concealed carry permit could carry a gun on school campuses.

There's no state agency that tracks which campuses have given this authorization, according to the state Department of Public Safety.

Four years later, Brattin said he decided to push legislation to establish a school protection officer program after hearing about school shootings and realizing "what a soft target our schools really are."

For some rural schools, it takes law enforcement 45 minutes to respond to a call, Brattin said, and several of the districts didn't have access to school security guards.

Some teachers and administrators were already carrying firearms to respond to potential threats, so Brattin said he wanted to offer them training.

"I wanted to develop something that had a rigorous form of training to it," Brattin said.

Brattin's 2013 bill didn't pass, but one provision from his proposal made it onto a bill that was signed by the governor. It allowed the POST Commission, which facilitates training for law enforcement statewide, to determine minimum standards for training for these teachers and administrators.

Those standards include more than 100 hours of training in handling imminent threats, de-escalation and administering first aid.

The next year Brattin was able to get his proposal attached as an amendment to a wide-ranging gun bill, which the bill sponsor, then-Sen. Will Kraus, boasted would make training for teachers and administrators who want to be school protection officers mandatory.

The idea behind Brattin's amendment was to take the state's concealed carry law a "step further," Kraus said at the time.

"So this actually puts an additional requirement on those individuals," Kraus said during a 2014 floor debate. "I think it's important that we train those individuals if they are going to carry (on campuses)."

According to Department of Public Safety spokesman Mike O'Connell, the state has a "narrow role" of facilitating the school protection officer training program.

If school districts want to use the state's training program, they can, but he said, "there's nothing that says you can't do this on your own."

It's up to each district to decide who becomes a school protection officer, he said, and "there's nothing that we would have a say in."

As of today, 70 people in 29 school districts have opted to go through the state's training. St. Louis is not among them.

The Department of Elementary and Secondary Education does not oversee the training or certification of either school resource officers or school protection officers, a department spokesperson said.

Now, Brattin wants to make it mandatory for schools to allow someone to carry in the building. But it remains unclear how the state would track these individuals or if training could be required of these gun carriers.

Brattin said there is "ambiguity" on tracking who receives training because school districts can opt to authorize people under the concealed carry law or under the school protection officer statute.

"Nothing is stopping these schools just from authorizing a teacher to have a CCW (concealed carry weapon)," Brattin said. "That's something that is already authorized. (The school protection officer measure) didn't nullify that."

Two weeks before he entered a St. Louis high school and killed a teacher and student, 19-year-old Orlando Harris attempted to buy a gun from a licensed dealer in St. Charles.

An FBI background check blocked the sale, according to St. Louis police officials, and he ultimately bought the weapon that he used in the shooting from a private seller.

Background checks are not required under federal or Missouri law to legally buy a firearm from an unlicensed private seller. Democrats want Missouri to join 21 states and the District of Columbia in extending background checks beyond federal law.

"A requirement for universal background checks on all firearm purchases would have blocked this sale," House Democratic leaders wrote in a Nov. 3 letter to the governor and GOP legislative leaders.

Nine days before the shooting, Harris' mother asked police to take the gun away from him because she was concerned about his mental state. Police said state law didn't give them the authority to take Harris' weapon.

"The State of Missouri does not have a red flag law," St. Louis Police Sgt. Charles Wall said in a statement to the media. "That means SLMPD officers did not have clear authority to temporarily seize the rifle when they responded to the suspect's home when called by the suspect's mother on 10/15/22."

Brattin, like many Missouri Republicans, said he strongly opposes red flag laws because people could abuse the process.

He believes Harris' family should have taken the gun away from him on their own.

"First and foremost, if the mother knew that, she could have had a family member just go and take the gun themselves from the son, instead of having to get law enforcement involved," Brattin said.

St. Louis Police Chief Michael Sack said the mother worked with officers to give the gun to an adult who was lawfully able to possess it.

"The mother at the time wanted it out of the house, so they facilitated that," Sack said. "This other party had it. How (Harris) acquired it after that, we don't know."

St. Louis school leaders and elected officials don't want to see more armed security. Instead, they are pushing for a ban on assault rifles.

"I do not think that we need guns in our schools, period," said Sen. Karla May, D-St. Louis, in an interview with The Independent after the shooting. "What we need to do is strengthen our state gun laws and we won't have to worry about people having unlimited access to ammunition, and clips that shoot 20 and 40 rounds at one time."

May said arming teachers and people in the school sends a certain message to the children.

"And that's not the message we want to send," May said. "We want a safe, peaceful environment for our kids to grow up in. And we can do that by strengthening the gun laws in this state."