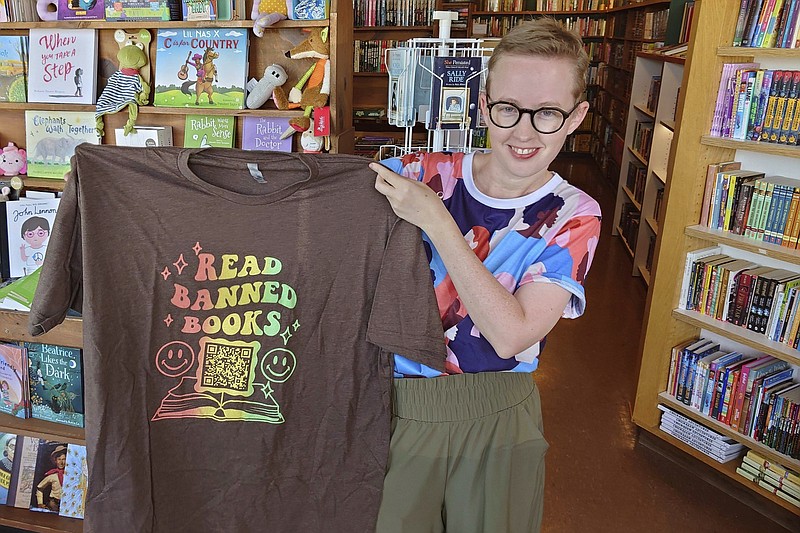 Former Norman High School English teacher Summer Boismier holds up a T-shirt with a QR code link to the Brooklyn Public Library at the Green Feather Book Company in Norman, Okla., on Oct. 6, 2022. Boismier found herself at the center of a political firestorm in Oklahoma after providing the QR code to her students and ultimately left her teaching job. (AP Photo/Sean Murphy)

NORMAN, Okla. (AP) -- Summer Boismier was living her childhood dream. She grew up a bookworm, became a high school English teacher, and filled both her classroom and home with her favorite literature.

She taught her students: "Stories are what is fundamental about the human experience. We all have them."

Boismier especially loves the fantasy genre, a passion sprouted from childhood favorite "Harry Potter." But even in a world of fantasy, she couldn't have dreamed that a lesson from her English class would land her in the center of a vigorous statewide political campaign and turn her into a target for candidates and voters on social media.

During the past two years, the nine-year teaching veteran was growing alarmed with the Republican-controlled Oklahoma Legislature's increasing efforts to restrict access to books in public schools. In her classroom, she covered some bookshelves with red butcher tape and labeled them "Books the state doesn't want you to read." She gave students a QR code link to the Brooklyn Public Library, which provides access to a variety of banned books.

She hoped to spark a discussion about the legislators' book restrictions and a new law prohibiting lessons on critical race theory and other concepts about race and gender. Instead, she was summoned to a meeting with school administrators after a parent complained.

A firestorm erupted as Boismier resigned and a reporter from a local television station covered the story. The state's Republican candidate for superintendent of public schools, Ryan Walters, wrote a letter to the State Board of Education calling for Boismier's teaching license to be revoked.

"There is no place for a teacher with a liberal political agenda in the classroom," Walters wrote in the letter he then tweeted and sent to reporters, even accusing Boismier of providing access to "pornographic material." The incident gained traction on social media, and people claimed she was part of a larger movement of teachers indoctrinating students with liberal ideology.

Boismier, 34, and other teachers have found themselves at the center of a renewed conservative interest in public education as a political issue. The movement gained steam with parents opposing mask mandates and other COVID-19 measures. It has since broadened, and some supporters focus on issues they say clash with conservative values -- such as teaching about social justice, gender, race and history.

For weeks, Boismier -- a book-loving English teacher without any political aspirations -- was the focus of an ugly and heated statewide campaign. People on social media called for her to be prosecuted, thrown in prison or even lynched.

"It was a little bit of a firehose of bigotry," Boismier said.

Even after she resigned, the campaign against her continued, and she left home for a short time when someone emailed a threatening note that included her address. She called her mother in tears.

"That's hard enough to read to yourself," Boismier said. "It's even harder, I think, to read that to your mother. I'm not going to lie. I was scared."

As Oklahoma struggles to hire enough qualified teachers, those already in the jobs have increasingly found themselves the target of such conservative attacks and politicians. On the campaign stump and social media, Walters has relentlessly attacked public school teachers as liberal indoctrinators. Norman, one of Oklahoma's most liberal cities, and Tulsa Public Schools, one of its largest districts, both have been singled out by conservative politicians. Similar attacks against schools and libraries also have proliferated across the country.

"I've seen the propaganda Democrats want in our schools. It's sick," Walters said in one of many online videos he's posted during his campaign to lead the state's public schools system. "I'm here to fix our schools and teach leftists a lesson."

Walters also has leaned hard into his opposition to transgender students playing sports or using bathrooms that correspond to their gender identity. He recently suggested at a GOP gathering that all history teachers in Oklahoma should undergo patriotic education training from a private, conservative Christian college in Michigan.

But it's not clear that Walters' message, which helped him win the Republican primary, is resonating in deep-red Oklahoma. A Democrat hasn't been elected to statewide office since 2006. Walters, a former classroom teacher who was tapped as secretary of education by Republican Gov. Kevin Stitt, is in a tight race with Democrat Jena Nelson, a veteran English teacher and the state's 2020 teacher of the year.

"We need a state superintendent who believes in our public schools, elevates our teachers, not threatens to defund schools or threatens teachers," Nelson said in a recent televised debate.

Jamie Qualls, a special education teacher at Madill Public Schools, a rural district in far south Oklahoma, said she's a Republican who plans to vote for Nelson because she dislikes Walters' rhetoric.

For Boismier, her story has a happy ending. She found comfort in the community that rallied around her amid the attacks -- some even printed yard signs, buttons and T-shirts with the QR code she shared with students. One yard sign is prominently displayed in the front lawn that can be seen from the football stadium.

Now, she's heading to New York for a job with the Brooklyn Public Library -- her first move away from Oklahoma since a brief internship in Washington after college.

Despite the controversy and roller coaster of emotions she's experienced over the last two months, she said she'd be willing to go through it all again -- she's proud she stood up for her students and now has the opportunity to reach more young people.

"My teaching certificate may very well be on the chopping block," she said. "But I'd do it all again with zero hesitation.

"My only regret is that I didn't do it sooner." 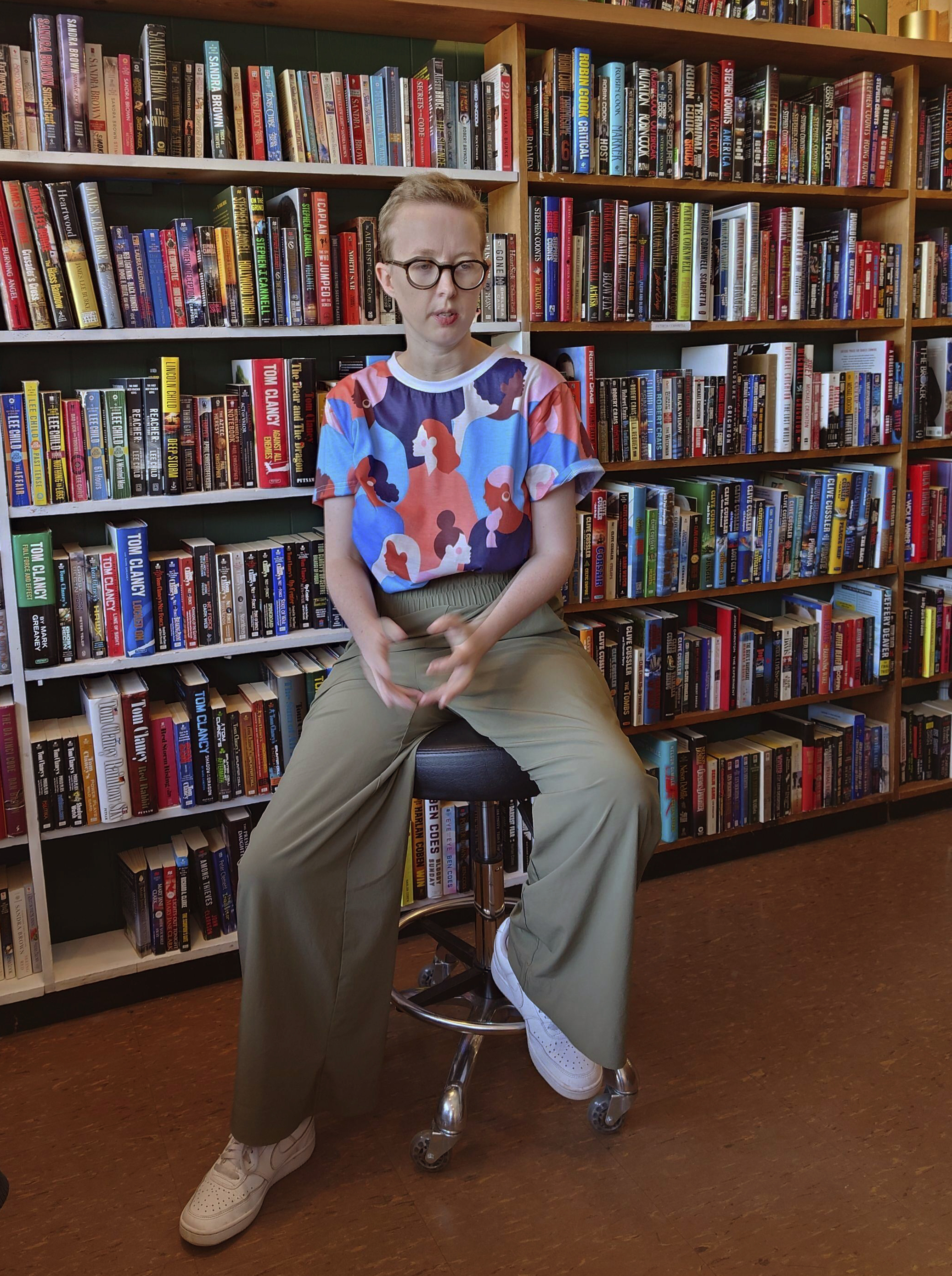 Former Norman High School English teacher Summer Boismier holds up a T-shirt with a QR code link to the Brooklyn Public Library at the Green Feather Book Company in Norman, Okla., on Oct. 6, 2022. Boismier found herself at the center of a political firestorm in Oklahoma after providing the QR code to her students and ultimately left her teaching job. (AP Photo/Sean Murphy) 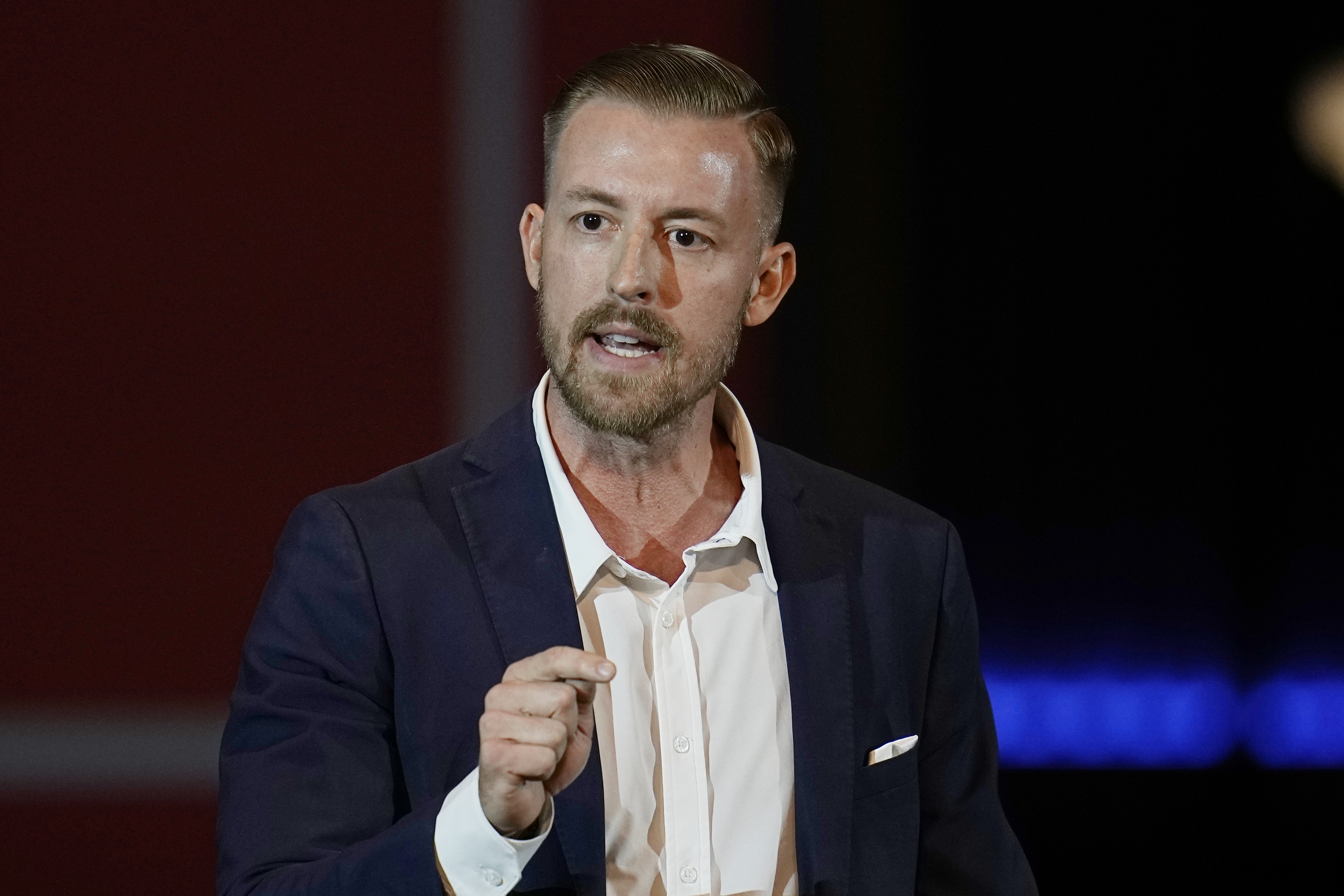 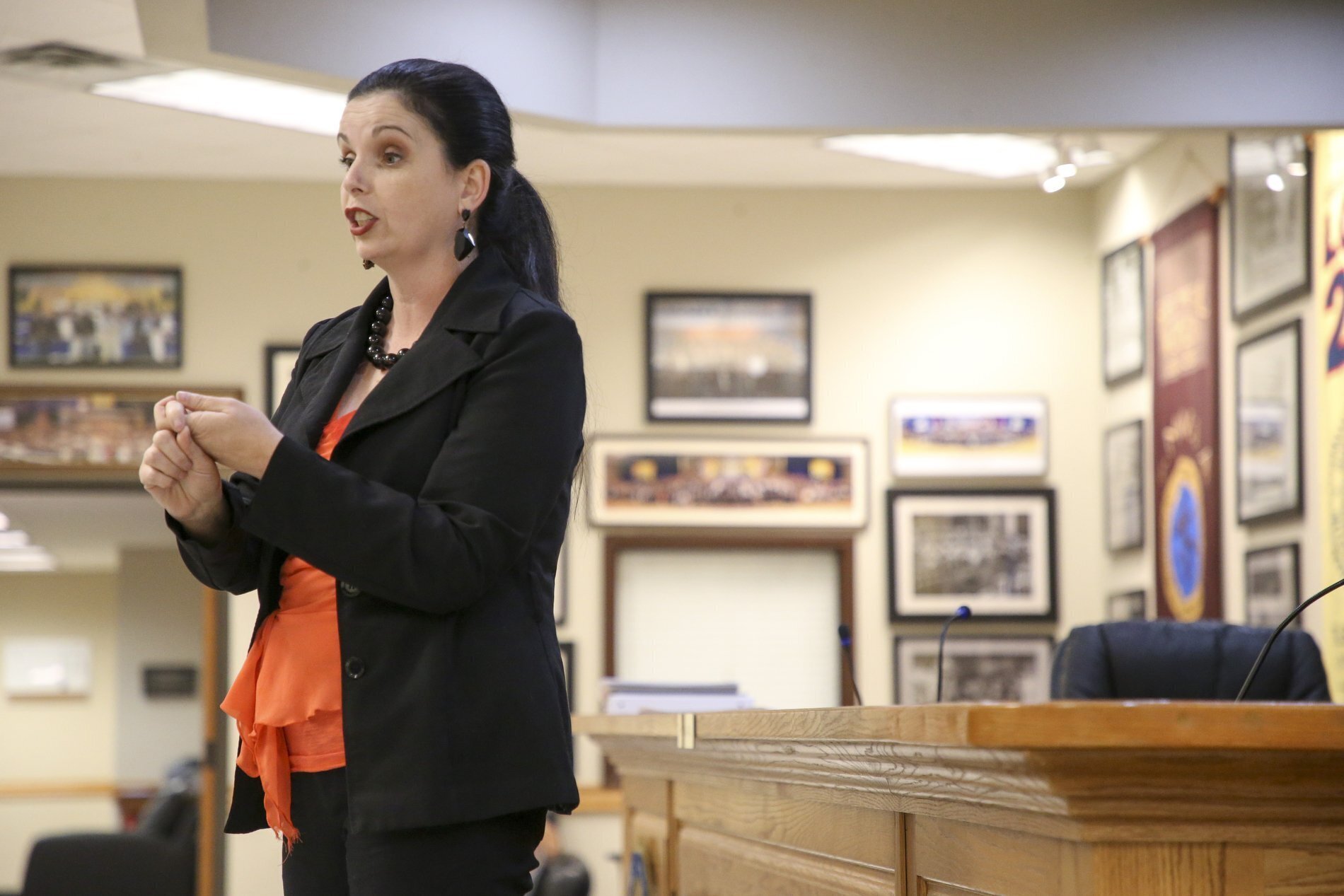