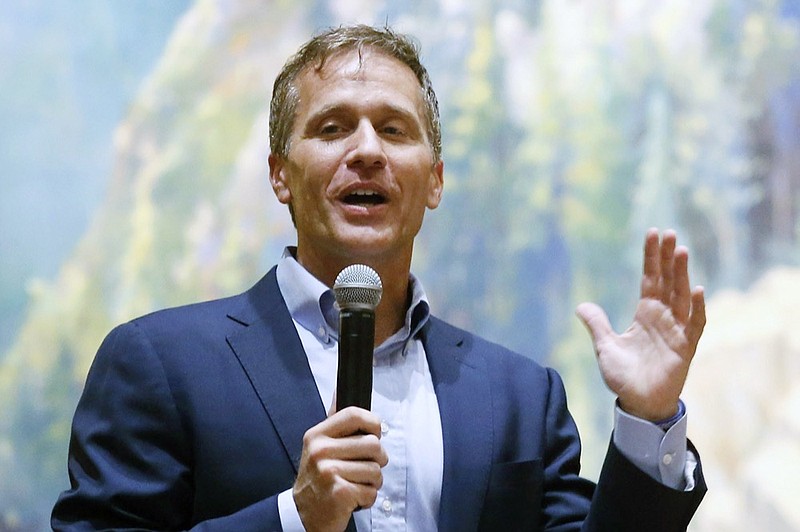 Phone records show Sheena Greitens didn't talk to Karl Rove, Mitch McConnell "or any person working for these men" in the weeks before she made explosive allegations of child and spousal abuse against Eric Greitens, her attorney said Tuesday.

Sheena Greitens' call logs and text messages for the period Feb. 1 through March 22 were subpoenaed by her ex-husband in an effort to show she lied about the abuse to undermine his campaign for U.S. Senate.

Helen Wade, Sheena Greitens' attorney, wrote in a statement to the Independent the subpoenaed records were turned over last week. The information contained, Wade wrote, contradict Eric Greitens' assertions his ex-wife conspired with his political enemies to lie in an affidavit made public on March 21.

"The records subpoenaed by Eric Greitens refute his repeated public statements accusing Dr. Sheena Greitens of coordinating with political operatives in the preparation and filing of her affidavit, and of leaking that affidavit to the press," Wade wrote.

The affidavit, and the subpoena, are part of the ongoing child custody dispute between the Greitens, who were divorced in 2020. They are due to be in court Friday in Columbia, when Associate Circuit Judge Leslie Schneider will hear arguments over whether the case should be handled in Texas courts, where Sheena Greitens now lives, or remain in Boone County.

Eric Greitens' attorney, Gary Stamper, wrote in an email his review has uncovered contacts Wade and Sheena Greitens will have to justify in court.

"I have repeatedly said 'a lie can travel halfway around the world while the truth is putting on its shoes,'" Stamper wrote. "The denial proffered by Dr. Greitens' attorney ignores one, or more, easily identifiable calls."

Stamper declined to give details on the calls he has identified but said he would question Sheena Greitens about them if she takes the stand Friday.

The Associated Press published the first story about the March 21 affidavit shortly after it showed up on the updated docket of the case in the online court filing system known as Casenet.

All of Sheena Greitens' accusations have been made in sworn statements. She could face perjury charges if she has lied.

Sheena Greitens has been seeking to move the case since last year, after Eric Greitens launched the Senate campaign intended to be his political comeback.

The case is in Boone County Circuit Court because Sheena Greitens lived in Columbia at the time she filed for divorce because she was on the faculty of the University of Missouri. A scholar who specializes in studying North Korea, she is now an associate professor at the University of Texas' LBJ School of Public Affairs.

Eric Greitens was elected governor in 2016 and resigned June 1, 2018, amid allegations of violent sexual misconduct and an investigation of his campaign finances.

A Missouri House committee was considering whether to recommend his impeachment. Greitens agreed to resign as part of a plea deal with the St. Louis prosecutor to dismiss a felony charge stemming from allegations he stole from a veterans charity.

In the affidavit filed March 21, Sheena Greitens alleged Eric Greitens knocked her down and confiscated her cell phone, wallet and keys during a 2018 argument so she would be "unable to call for help or extricate myself and our children from our home."

As his political problems increased in the first half of 2018, Sheena Greitens said in the affidavit, her ex-husband repeatedly threatened to commit suicide unless she showed "specific public political support" for him. As a result, she and others were so concerned they limited his access to firearms on at least three occasions that year.

"I started sleeping in my children's room simply to try to keep them safe," Sheena Greitens said in the affidavit.

In November 2019, the affidavit states, one of their sons came home from a visit with Eric Greitens with a swollen face, bleeding gums and loose tooth and said his father had hit him. The affidavit states Greitens said it was an accident while roughhousing. The tooth later had to be surgically removed.

In statements to the media, on social media accounts and in campaign fundraising appeals, Eric Greitens accused his wife of conspiring with his political enemies.

"I want to tell you directly, Karl Rove and Mitch McConnell," Greitens said in a video tweeted March 25. "Hear me now. You are disgusting cowards. And we are coming for you."

The path to McConnell, according to Greitens supporters, is Linkul, who works for Pathway Public Affairs, a Republican consulting firm led by Phil Cox, a board member of a PAC linked to McConnell.

In the statement, Wade said the records showed regular contact with her sister and Chambers, who is a personal friend. But that doesn't equal a conspiracy, Wade said.

"Contrary to the statements of Mr. Greitens' attorneys and campaign," Wade wrote, "the records of Dr. Greitens' communications are not indicative of any sort of collaboration with her sister, with Mr. Chambers, or with any other person."