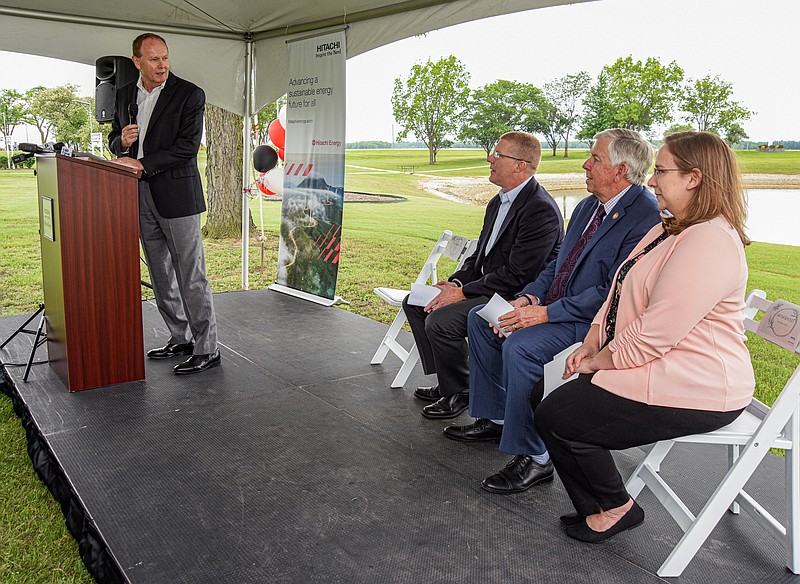 Steve McKinney, left, turns to officials and guests Tuesday, May 24, 2022, during an event to celebrate the 50th anniversary of Hitachi Energy, which originally opened in Jefferson City as Westinghouse in 1972. The company later became ABB and following its most recent sale, is now known as Hitachi. McKinney serves as senior vice president and head of transformers in North America. Seated, from left, are Greg Callahan, Hitachi factory manager; Gov. Mike Parson; and Maggie Kost, acting director of Department of Economic Development. (Julie Smith/News Tribune photo)

The project, an investment of around $10 million, will see the addition of a new production line expected to create around 75 new jobs. It will be funded through the Missouri Works program, which allows companies to expand and retain their workforce through withholdings or tax credits.

The facility is already among the largest operated by Hitachi, with a more than 600,000 square foot manufacturing area and around 950 employees. The site produces liquid-filled pad mounts and submersible distribution transformers for commercial buildings, industrial facilities and the power grid, increasing resiliency and reliability for consumers.

It also produces equipment used by Ameren Missouri, the local investor-owned utility provider, and makes use of Ameren's smart power upgrades to bolster its electric infrastructure.

The addition will further expand the site with an additional production line for larger transformers, in addition to automated equipment and upgrades to improve performance. A release from the company states the expansion would help to meet the growing demand for transformers in emerging markets.

Several officials, including Gov. Mike Parson and Department of Economic Development Acting Director Maggie Kost, were on hand at the facility to celebrate the milestone Tuesday. Kost praised the resiliency of the business amid the COVID-19 pandemic, noting the dedication of employees and the quick transition to ensure their work could continue despite the extraordinary circumstances.

"You showed up, and you were essential, and a huge part of keeping our economy going," Kost said. "That's a huge reason why Hitachi energy is making that $2 million investment in this facility. It's because of the people that are here in this facility."

Company leadership was also on hand, noting high-profile customers such as Facebook and Amazon as well as the Jefferson City plant's ability to address the growing demand.

"As electricity emerges as the backbone of our entire energy system, more and more sectors of the economy are depending on us to deliver reliable distribution transformers," said Steve McKinney, senior vice president and head of Hitachi's North American transformer business. "As a result, we are seeing demand grow faster than most factories can support. As a commitment to our customers and accelerating the clean energy transition, we continue to invest aggressively to ensure our Jefferson City location can help address demand and remains at the forefront of innovation."

The Jefferson City facility opened its doors in 1972 under Westinghouse and was eventually sold to Swiss-based ABB. Its purchase by Hitachi Energy, a global energy producer, took effect in 2020.

It produced its two-millionth transformer in 2004, with its three-millionth expected by 2025.

Dedication to the company amidst the crowd was palpable as the governor recognized longtime employees of the plant, some of which had signed on when the plant first opened in the early 1970s. Parson touted their dedication as an example of the hardworking spirit of the Show-Me State.

"You don't go to a lot of 50th anniversaries in the business arena anymore, so it says a lot about the foundation you've got here," Parson said. "Yes, we're here to celebrate the name brand, what they do in the utility business and how that affects us all every day, but also to tell you what it's done for families for 50 years."

Local business leaders were also there to applaud the anniversary and expansion. Gary Plummer, Jefferson City Area Chamber of Commerce president and CEO, said the facility had withstood many challenges -- from devastating flooding in 1993 to the 2008 recession and the pandemic -- and had made a name for itself as an adaptable and important part of the Jefferson City community, as well as one of the area's most prominent employers.

"I was here in '93 when we had that flood; I saw how resilient this workforce was and the steps they took in order to protect this plant," Plummer told the News Tribune. "And, you know, there were a lot of us were afraid we were going to lose the land, but we're here 25 years later, seeing how it has survived and thrived. You know, it's just a great testimony to the company."

Parson and other officials also took part in a tree planting on campus recognizing the milestone, as well as the growth and stability the site has shown during the past half-century and the strong foundation the business is building on for the future.

"Our tree will symbolize the growth and stability we've seen here over the last 50 years," factory manager Greg Callahan said. "And as the tree's roots develop and grow stronger, so will we over the next era as we welcome the next generations of employees that grow with us right here in Jefferson City."

CORRECTION: This article was edited at 10:19 a.m. May 25, 2022, to state Hitachi produces equipment used by Ameren Missouri. The original wording was incorrect.