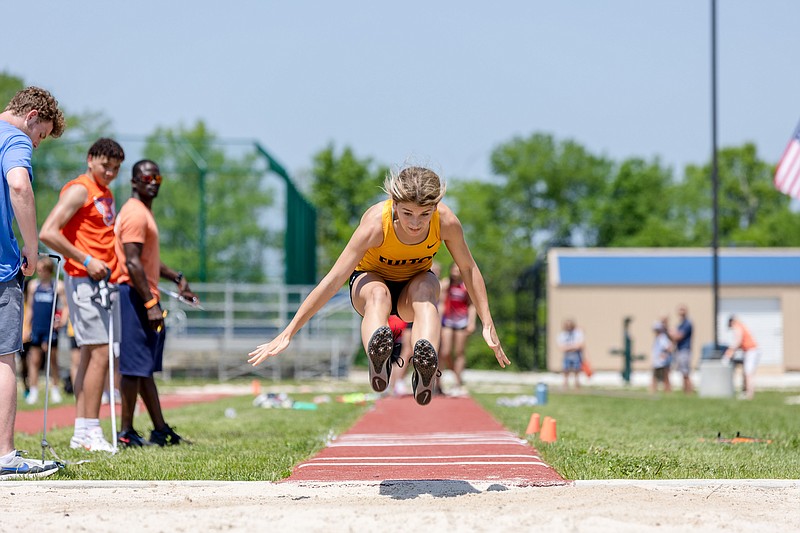 Fulton freshman Emmy Begemann glides through the air in the triple jump Saturday, May 14, 2022, in the Class 4 District 4 meet at North Point High School in Wentzville, Mo. (Courtesy of Alan Combs)

The Fulton track and field team sent three athletes to Monday’s sectional meet in Mexico. Only one athlete advanced to state, but Fulton will be seeing triple in Jefferson City this weekend.

Freshman Emmy Begemann was the lone Lady Hornet to qualify for state at the Class 4 Sectional 2 meet by finishing third in the girls triple jump.

Begemann was coming off her Class 4 District 4 personal-best jump of 33 feet, 1.25 inches May 14 in Wentzville and came close to matching that once again Monday, posting a best jump of 33 feet on the second of four attempts at sectionals.

Freshman Olivia Weaver just missed the cut for state, finishing fifth in the girls’ 100-meter hurdles with a time of 19.61 seconds. The mark was short of the personal-best 18.75 seconds she set at the district meet.

Parkway Central Skyye Lee won the 100 hurdles in 14.21 seconds and Hannibal’s Nora Hark earned the fourth and final state spot with a time of 17.16 seconds.

Freshman Kenzie Shock matched a personal-best 4-9.25 in the high jump, which previously achieved April 14 in Boonville, but finished seventh in the sectional meet.