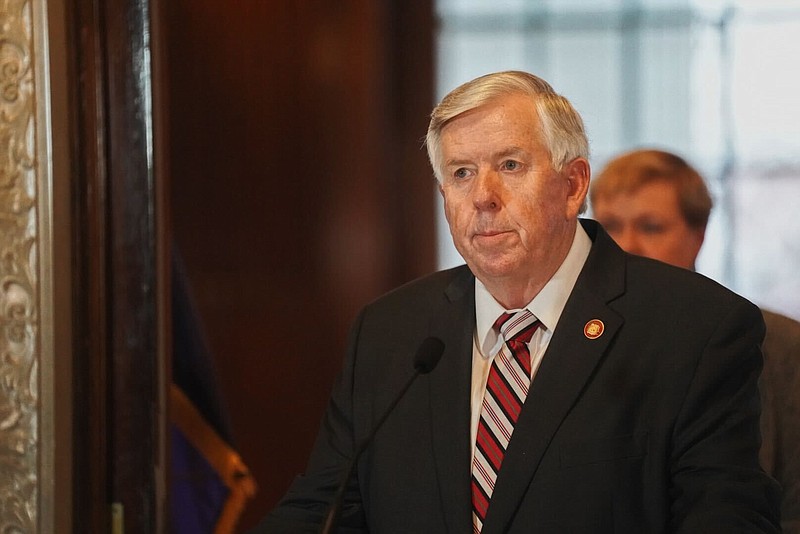 A measure to provide $500 million in tax credits to Missourians may be in jeopardy of Gov. Mike Parson's veto power.

The tax measure, funded with federal American Rescue Plan Act dollars, was carried as a standalone bill that didn't make it across the finish line this session and as a provision in HB 2090, sponsored by Rep. Dave Griffith, R-Jefferson City.

HB 2090 was created to offer state employees a bi-weekly pay option but was amended to include the provision for up to $500 in income tax credit for individuals and $1,000 for married couples.

The tax credit, which would be applied to the 2021 tax year, is equal to the amount of taxes an individual owes and in order to qualify, the Missouri taxpayer must make less than $150,000 annually.

"I think there's going to be a lot of discussion about that," Parson said. "I think that was kind of put together in pretty quick fashion for us."

"I think any time you're kind of picking losers and winners of who gets a tax -- I'm not even sure it's a tax rebate, a tax bonus, I don't know what it is. It's like a coupon, I guess, but I think there needs to be a lot more to that," he continued.

The governor questioned why an amendment was added to the bill to cap the rebate at $150,000 and why a significant number of Missourians won't receive the rebate.

"If we're going to do something, probably what I would be calling on the Legislature to do is cut everybody's income tax," Parson said. "Make it fair across the board. We can afford to do that right now, and I think it's a good time to do it."

The governor's concerns are shared by AARP Missouri and the Missouri Budget Project, a nonprofit public policy analysis organization. Both organizations are urging the governor to veto the tax proposal.

The groups claim the measure was rushed through the Legislature and Missourians who are struggling most with inflation won't receive the tax break.

"Many older adults on fixed retirement or Social Security incomes don't owe Missouri income taxes, but they pay plenty of other taxes, like sales and gas tax," Jay Hardenbrook, advocacy director for AARP Missouri, said in a news release. "Folks with limited incomes are already feeling the pressure of increased costs for their basic necessities, and as those costs rise, so do the sales taxes they pay. Yet they are left out of this flawed economic relief."

According to an analysis from Missouri Budget Project, 36 percent of Missouri taxpayers won't receive anything from the tax break proposal on the governor's desk and those who do receive a rebate will likely not receive the full $500 for individuals or $1,000 for married couples.

Approximately 60 percent of the taxpayers in the bottom 80 percent of income earners will see a cut, according to the Missouri Budget Project. For individuals earning $66,000-$110,000 annually, the rebate will likely be $280, the analysis states.

"Whether through sales, property, gas taxes or other fees, all Missourians contribute to our state's budget, yet lawmakers chose to leave out the Missourians most struggling in today's economy," Amy Blouin, president and CEO of Missouri Budget Project, said in a news release. "We urge Governor Parson to right this wrong by vetoing House Bill 2090."

Click the links below to read the full bill: