Thankful and blessed for family 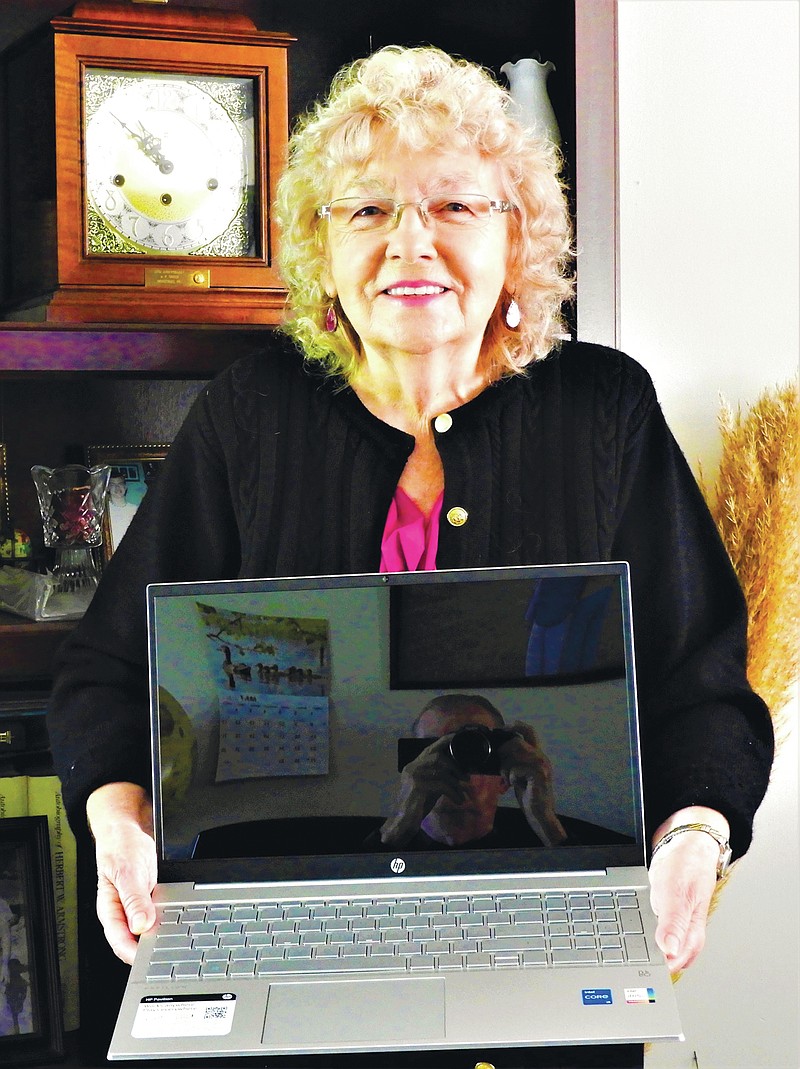 Dorothy Kleindienst shows off the new laptop she received from her sons for Mother's Day. CONTRIBUTED

Mother's Day has come and gone, but not for me. Every day is Mother's Day because of our exceptional sons. While they do try to think of something special for me on this celebrated day, they are always loving and considerate every day.

Maybe it's my age, or perhaps it was such a surprise, and something I really needed, but I was very emotional over my gift.

My old computer has been barely hanging on. My last story for the newspaper was mostly done by phone. We took the computer to the repair shop, but they said it was too old to fix. So, we have been intending to shop for one. However, it would not have been one this nice. This one is as perfect as I would have wanted, but twice as much as I would have afforded.

We were just backing out of our driveway when the FedEx truck went down our dead-end road. Daniel and Camilla had alerted me to expect a "little" package today, so I told David we had better wait until FedEx comes back up our road, he may be stopping. Sometimes the kids send something that I have to sign for.

I was expecting something like jewelry would be coming in that "little" package from them. They had already sent me a big, nice jewelry box before.

The lady jumped out of the truck with a bigger package and handed it to me in our car. This is normally our son Eric's route, but his day off.

David said, "I'll open it for you so you can see what it is, then you can put it inside the house." He took out his pocketknife and opened it. Tears was trying to sneak out and I said in a whisper, "It's a new computer!"

I was embarrassed over the tears. Why am I doing this? I thought. We had been talking about looking for a new one the next week. The most economical we could find but would do the job. This one has everything! It is the 'Rolls Royce' of computers. That's what announcers call Connie Smith, "The Rolls Royce of lady singers."

The funny thing happened then. We went to town and stopped by to see our county commissioner, who happens to be our middle son Randy. We wanted to say goodbye, as he was preparing to leave on vacation. He would be going out of state for a few days to hunt for a Merriam Turkey. He already gets his turkey here every year, since he was 7 years old.

We talked about where he and his friend Jake was going, the route, etc... He and his dad talked guns, ammo, bears, mountain lions, etc... man stuff.

Then I asked the things that mamas always ask, "do you have enough snacks?" We had brought them by a few beef sticks to munch on the way. He took them, thanked us, and then assured me they had plenty to eat. Then I gave the same advice I always give, don't forget your phone charger! Somehow, they always know I am going to say that.

Then as we were leaving, he told me he and Christine hadn't forgot me for Mother's Day, I would be getting something in the mail. He was leaving early Mother's Day on this trip.

I decided to go ahead and tell him about the present Daniel and Camilla had sent me. I said, "Randy, Daniel made me cry this morning." I think he knew where I was going with this. Because I can't recall Daniel ever making me cry...

He said, "Well, sometimes that happens. What did he do or say?" I said, "He sent me a new computer!" He looked funny and said, "Oh he did, did he!" I thought, oh, oh, I bet Christine told him I was having computer problems. I said, "Oh, did you all order me one too!?" It was taking a while to sink in. He laughed and said, "just go ahead and thank Danny."

Daniel's birthday, Eric's birthday and Mother's Day are all around the same time, which means there's a lot going on. Eric wanted a book on Wild Missouri Foraging. He knows a lot of wild greens, mushrooms, etc... but wants to know more. So, I ordered him a book. He got it and when we stopped by his house, he was laughing and said, "I'm gonna thank Danny" for the book.

It's a family joke. No one calls him Danny, except Aunt Abbie Akers, and Aunt Opal Salmons, my mom's sisters, always did. Every event they always wanted to know if "Danny" would be there.

I finally realized something was going on. It wasn't but a few minutes and I got a call from Daniel. He advised me that it was a gift from ALL three of our sons; Daniel, Randy and Eric. We all have had a laugh over it. They kept a secret from mama and that's hard to do.

And I want to thank Brandon Flowers, whom we claim as ours. He knows how to do technical work and he is the one we always count on for taking care of that kind of issue. He transferred all my things from my old computer to the new. He also bought me a new camera sim card that works for this computer. Camilla bought me a SanDisk too, so I could save things on it.

Well, it goes without saying, but we do have incredible sons and daughters-in-laws. I am sitting here drinking coffee from our Keurig coffee maker, with news on our big flat screen TV, all from our kids, and I'm thinking how thankful and blessed we are.

By the way, Randy was successful on his first morning and got a real nice Merriam Turkey, story will be in later.