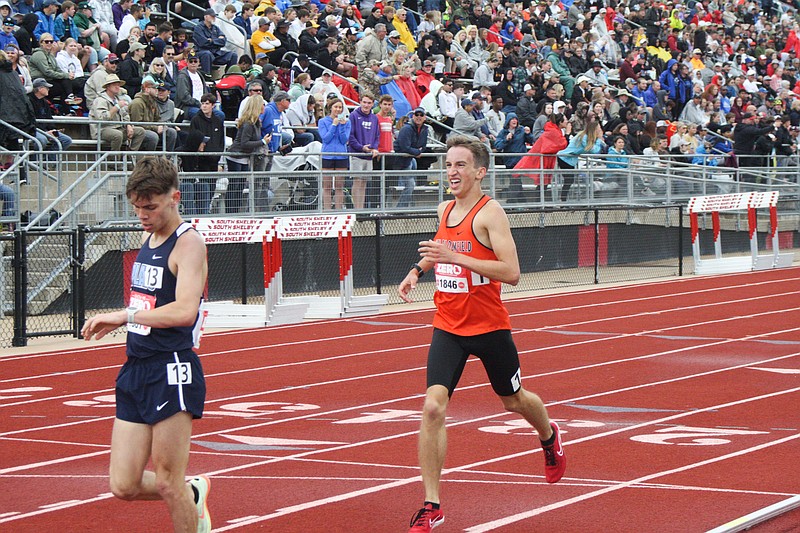 It was the final race of Nathan Hinrichs’ high school career so he made the most of it.

The New Bloomfield senior won his fourth state medal and second of the 2022 Class 2 track and field state championships Saturday at Adkins Stadium in Jefferson City after finishing third in the boys’ 1,600-meter run. His time of 4:22.03 not only shattered his personal best as he wanted to going in but decisively beat the school record time of 4:29.88 set by former all-state runner Caleb Distler last year.

Hinrichs said he thought Saturday’s 1,600-meters was his best-ever race and couldn’t think of a better way to finish his high school career.

“That’s probably the best race I ever ran, even though I didn’t even come close to winning,” Hinrichs said. “I’m just so happy with the way that I ran it.”

Hinrichs was sitting in seventh place after the first of four laps, but by the end of the second lap, he was only trailing New Covenant Academy’s Tanner Talley and Plato’s David Held as was the case Friday in the 3,200-meter run.

After the third lap, Hinrichs said he started feeling tired and had to push himself to finish the race. He finished strong as he posted his best lap time of 1:03.56 in the final 400 meters to finish in the top three for the third time in his career.

Hinrichs said staying with Held was important to put him on track of accomplishing his goals.

“It was a lot better than the 3,200,” Hinrichs said. “I was in a better position. I found a place by the rail and then I got in third place. I knew if I stuck with David Held from Plato, I would be in good shape because he is a really strong runner. So it just went perfect for me.”

New Bloomfield head coach Jacob White said Hinrichs had fantastic splits in his race Saturday, which could be explained by the more chaotic schedule on Day 2 of the state meet. Severe weather delayed the start of the second day’s events to 1 p.m.

The running events were placed on a rolling schedule starting at 1 p.m., leading to the 1,600-meter run being moved back from its initial 1:20 p.m. start time to closer to 2:30 p.m. White said this gave Hinrichs more opportunity to rest before the race.

“He was kind of happy he got to rest a little longer,” White said. “He had a plan, he stuck with it and it turned out to work for him. He’s very relaxed.”

After running in Wildcat orange and black for the final time, Hinrichs said he is proud for all he accomplished after he started developing a love for running in seventh grade. As the fun increased for Hinrichs, the work he put in increased as well.

When COVID-19 canceled school and sporting events all across the country, Hinrichs turned to the one thing that gave him the most joy.

“Through eighth grade and freshman year, I found it a lot of fun,” Hinrichs said. “I kept doing a little bit more, a little bit more, and then eventually when COVID hit my sophomore year, I didn’t have anything to do. I had nothing to do so I was like ‘I want to get good at running. I really enjoy this. It’s something I want to keep doing.’ That’s when I really jumped up in fitness.”

Hinrichs said even winter didn’t stop him from honing his craft as he continued to train to the point that records started to fall for him in his junior season and he became one of the best in the state.

He set his previous 1,600 personal-best last year at 4:30.41 before overcoming an injury-plagued senior year to break it on the biggest stage.

“It’s not everything I wanted, but I’ve really enjoyed it,” Hinrichs said. “I’m really happy to end my senior year like this.”

White agrees Hinrichs couldn’t have ended his high school career any better as New Bloomfield will always remember his accomplishments, including his school records in the 3,200 (9:38.84) and now the 1,600.

“4:22 is pretty quick,” White said. “I don’t who’s going to break that anytime soon. He has been a very big asset to our team. I am going to miss him, but that’s a great way to go out. School record, all smiles, third place at state, I’m very happy for him.”