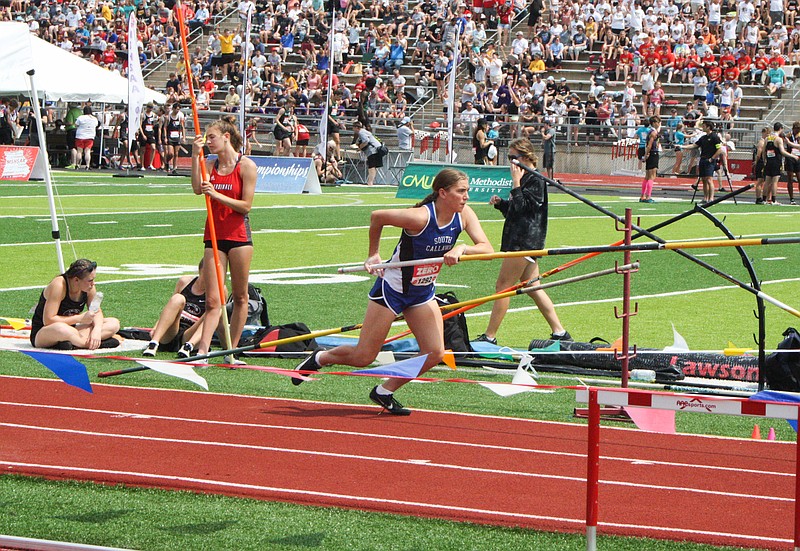 It was a typical yet unusual year for South Callaway track and field.

Typical in that some Bulldogs competed Friday in the Class 2 state track and field championships at Adkins Stadium in Jefferson City but unusual in that all five qualifiers were in the field events. Two of those Bulldogs came away as all-state athletes as junior Lacey Mathews finished seventh in the girls’ pole vault and senior Raegan Brown took seventh in the girls’ long jump.

South Callaway head coach Bill Frazee said it was atypical of South Callaway not to bring at least a relay team to have representation in the running events but is proud of the five athletes who had already proved to be among the 16 best in the state in their respective events. He said he is thankful for coaches like Jim Hager and Stephen Wisch, who respectively coached Mathews and Brown in their events while he served as a MSHAA official at the meet.

“It was so odd this year,” Frazee said. “We just had field events. I count on my other coaches taking care of that and they all do a great job.”

Mathews began in the morning by clearing her first five heights on the first attempt in the pole vault, with the highest being 2.86 meters. She struggled when the bar was set to 2.93 — not far behind the school record 3.02 meters she set at the sectional meet a week ago — as she failed in all three attempts to clear it.

Frazee said he knows Mathews expected more of herself, but the state meet exists for the reason to showcase the best in Missouri and see who can rise to the occasion. Still, he is proud of her performance is happy she has another year.

“Coach Hager kept Lacey right where she needed to be,” Frazee said. “She was in a good place.”

Mathews said she was trying to stay focused in what was her first trip to state, and she is glad she was able to make the podium in her first appearance after not clearing a height at the sectional meet a year ago.

“It feels really good,” Mathews said. “From no-heighting at sectionals last year to PR’ing at this year’s sectionals. I was trying to stay out of my head, keep my head just clear of all thoughts and just go with the flow.”

Brown was amongst some tough competition in the long jump as the top seven in the standings were separated by five inches. In her second attempt, Brown had reached 5.17 meters to secure her a spot in the final but had difficulty surpassing that mark, matching it on the final attempt. The sixth-place finisher, Saxony Lutheran’s Isabella Deckerd had a mark of 5.18 meters while Ash Grove’s Julianna Torbett won with a distance of 5.30 meters.

Frazee said Brown will be hard on herself, but like Mathews, she shouldn’t hang her head as making the podium in the a field like that she be commended.

“It was a matter of Raegan had a great last jump, but she scratched by just a fraction that might have moved her all the way up to first place,” Frazee said. “So she can’t be too disappointed.”

Brown said she was happy just to compete in track and field this season after recovering from a concussion and being “burnt out” from basketball season. The all-state honors means much to her in what is her final athletic competition as a Lady Bulldog.

“It means a lot,” Brown said. “Coming into the season, I really wasn’t expected to run at all. I’ve had a lot of fun this season. We all just wanted to have fun today. It’s hard to put those nerves away, but in the end, we’re all smiling and want to make the most of it.”

Pontius started higher in the standings in the javelin after her initial throw of 32.55 meters. As the wind picked up, she struggled to match that mark in her final two attempts of the preliminary round. She made the finals and earned three more chances to make the podium but came as close as 31.93 meters on her fourth overall attempt as the eighth-place thrower, Clark County’s Allison Fox, improved her mark to 33.89 meters on her final attempt.

Frazee said Pontius had a great career at South Callaway, graduating with the javelin school record of 35.51 meters set at the sectional meet a week ago, and placing ninth among 16 girls at state. Her performance improved after Frazee said she had her work with University of Missouri All-American javelin thrower Sophia Rivera.

“She was real disappointed with her day,” Frazee said. “She knows she could’ve and should’ve done better, but that’s why we have the state meet. She said she was throwing well but just not good enough today.”

Mealy began his day in the javelin, building himself up to a 41.04-meter throw on his third and final preliminary throw. The mark didn’t advance him to the finals as he turned his attention early to the pole vault.

In the pole vault, he had one final attempt to clear the second bar setting of 3.19 and was successful prior to surpassing 3.34 meters on the first attempt. Mealy hung around for four more settings, clearing 3.63 meters on his final attempt. He was eliminated after failing at 3.70 meters.

While Mealy’s final season ended with no medals, Frazee said he is happy that Mealy was able to walk, let alone be good enough to qualify for state after sustaining a season-ending knee injury during football season. It was uncertain how much Mealy would be able to give going into the season, Frazee said, but ended up giving a nice effort on the biggest stage.

“We’re pretty tickled he’s walking today, let along running, let alone pole vaulting like he’s doing,” Frazee said. “He made the state meet. That’s one of all those kids coming down to 16 at the state meet.”

Dickinson threw the discus 34.55 meters on his first attempt but couldn’t put another in play as he fouled on the next two, leading to him missing the finals.

Frazee said Dickinson had already exceeded expectations before state when he beat three throwers projected to finish ahead of him at sectionals to qualify for the state meet for the second consecutive year in the discus.

“He was way overperforming anyway than we thought he could possibly do,” Frazee said. “But he’s a junior so big things looking ahead for Kyle.”

“We’re real proud and pleased with how they did,” Frazee said. “It was a hot day today.”