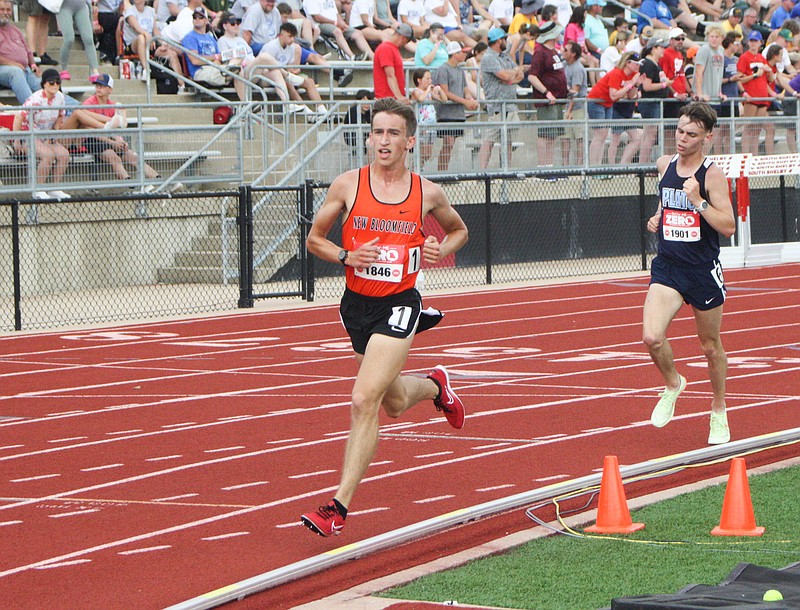 New Bloomfield senior Nathan Hinrichs runs in front of Plato’s David Held on Friday in the boys’ 3,200-meter run at the Class 2 track and field state championships in Jefferson City. Hinrichs finished second in the event with a season-best time. (Jeremy Jacob/FULTON SUN)

In the first day of the Class 2 state track and field championships at Adkins Stadium in Jefferson City, Hinrichs finished second in the boys’ 3,200-meter run, achieving a season-best time of 9:46.59, but losing first to the meet-record set by New Covenant Academy’s Tanner Talley.

Sophomore Hunter Dawson missed qualification for the finals today in the 110-and 300-meter hurdles, and the 4x400-meter relay team of sophomore Ben Speaks and seniors Andrew Brooks, Jace Pitzen and Brian Figard missed the final today by one spot.

Hinrichs was back in the 3,200 meters for a second straight year after finishing third a year ago with a time of 9:38.84. This year’s race wasn’t the best he has done in the event but the best this season after a year that was marred by injuries. Hinrichs said he had a couple of injuries that sidelined him and made it difficult for him to run this season, including groin tendinitis and a pulled lower body muscle, so performing as well as he did at state was a good moment for him.

“I’m just excited to be here,” Hinrichs said. “I only got a total of like two months. My training wasn’t even together as I had like a month before state.”

Hinrichs said he was aware of Talley and Plato’s David Held going into Friday and began the race trailing them. For a while, Hinrichs said he felt “boxed in,” differing from the feel of the race a year ago, but was able to overtake Held to improve his finish from last season.

Talley, meanwhile, was overtaking several at the back of the 16-runner pack as he coasted to his record-setting time of 9:15.11. Talley beat Hinrichs for the cross country state championships

“Around the mile, I really found my stride,” Hinrichs said. “I just went for it. I knew with Tanner Talley up front, I was going by myself for most of the race. I knew I wasn’t going to catch (Talley), so I was just going for a good race. It turned out good.”

Hinrichs said he feels more prepared for the 1,600-meter run today as it is a race that focuses more on speed while the 3,200 tests endurance, which was hard to build up in a season with injuries.

“I’ve actually been increasing speed, even while I’ve been injured, but my aerobic ability just isn’t there,” Hinrichs said. “I’m going for a nice PR (4:30.41) in it from last year, so we’ll see how it goes.”

New Bloomfield head coach Jacob White agrees Hinrichs is more primed for the 1,600 today and can’t wait to see how he does. White said he liked what Hinrichs accomplished in the 3,200.

“It was a weird start,” White said. “He opened up a little bit about three laps in, and he was able get back into his groove and ran his race. It was his best time of the year. Second place was kind of where we thought he would be today.”

Dawson was competing at state in the 110-meter hurdles for the first time in his career and was close to making his first final. He ran a time of 16.16 to finish fourth in the first heat of the preliminary round but was 10th overall. The eighth-place runner, Malden’s Jaumarcum Johnson, made the finals with a time of 16.09.

In the 300-meter hurdles — Dawson’s second straight state berth in the event — he finished fifth in the first heat with a personal-best time of 42.42. His mark Friday was better than his previous personal record of 42.72 set at the sectional meet a week ago and better than the 43.28 time that was 13th at state last year. This year’s 300 time was good enough for 11th overall, missing the final by less than a second and leaving him without an event for today.

White said there were eight upperclassmen ahead of Dawson in the 110-meters so 10th place is a great spot to be in his second season. Dawson has been New Bloomfield’s biggest scorer outside of Hinrichs this season so he can come back and be even better next year.

The 4x400-meter relay team had a near-miss, as well, finishing with a time of 3:35.43 to just miss its sectional time of 3:34.57 and just miss the final today as Southwest (Washburn) raced to a time of 3:34.11. The Wildcats finished sixth behind Southwest in the first heat.

White said he liked how each runner did on the team, and the unit performed close to its level.

“They ran good splits,” White said. “It’s just everybody else ran good splits at the same time. Ninth-place is a tough pill to swallow, but we ran pretty close to our best time on the season.”

“The performances were all good,” White said. “The near-misses are near-misses, but they’re here, and they ran good times.”