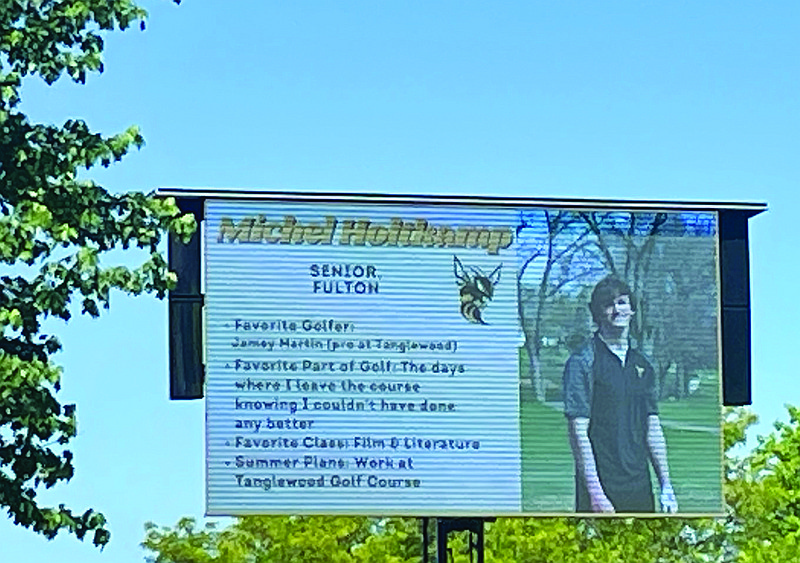 Fulton senior Michael Holtkamp flashes on the videoboard when he tees off Monday at the Class 3 boys golf state championships at Sedalia Country Club. Holtkamp shot an 88 on Tuesday after finishing Monday with a 104. (Submitted)

It was a day Fulton senior Michael Holtkamp wanted to forget but an overall experience he will remember.

He finished Monday after the first round at the Class 3 boys golf state championships at Sedalia Country Club in 83rd place after shooting a 104. Holtkamp played smarter Tuesday to finish Day 2 with a score of 88, placing him 80th among 86 golfers but was better than 26 golfers’ Day 2 scores.

Fulton head coach Jim Hall said Holtkamp made the adjustment after the course itself made an adjustment. The roughs were mowed about ¾ of inch, Hall said, so Holtkamp had to find out that the driver wasn’t necessary to get some distance.

“It helps after you see the course to know the course,” Hall said. “Sedalia, it’s only real defense is the rough. It’s a short golf course. When you can hit six-iron off the tee and still be in play, that’s the reason why he did better on Day 2.”

Hall said there were balls lost in the rough, especially on Day 1, which leads to a stroke and distance penalty. Golfers knew their balls landed in a certain spot yet couldn’t see them or get them out of the rough.

Once the rough was mowed, Hall said the course plays easier and helped some players be better Tuesday.

“It’s hard to get it out of the rough,” Hall said. “You can’t control it, you can’t get spin on the ball and you can’t stop it. The second day, the rough was a lot shorter, and it played a lot easier.”

Going into the season, Hall said Holtkamp had a good chance of making it to state at the end of the season after missing the tournament last season by a couple strokes, shooting a 20-over par. This season, he shot a 17-over par to finish tied for 14th to make the cut with a few strokes to spare.

After last year’s near-miss, Hall said Holtkamp had to bounce back mentally to become the first Fulton boys golfer to compete at state since Kory Masek in 2013.

“It’s just a stroke here or there (at districts last year),” Hall said. “I was hoping he would develop and mature some more because he only missed it last year because of the mental mistakes.”

Being smarter in how to play the course is the kind of mental mistakes Holtkamp was making before, Hall said, and he avoided those to earn the right to play Monday and play better Tuesday.