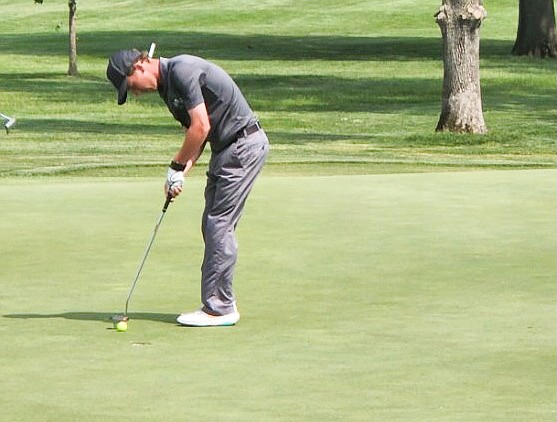 North Callaway senior Thomas Crum may have fallen short of being an all-state golfer, but he set the bar in the program.

Crum shot a 175 Monday and Tuesday at the Class 2 boys golf state championships at Columbia Country Club to tie for 21st out of 81 golfers. He was three strokes behind the back of the top-15 threshold required for all-state honors but had the best finish in school history.

“He’s been a great leader for our team,” North Callaway head coach Kalyn Meyer said. “His work ethic is fantastic and shows the other kids what it takes to be good at golf. Golf is a very finicky game that takes a lot of hard work and a lot of patience. Thomas does an excellent job showing his teammates what it takes to be able to exceed. I’ve been so fortunate to have him my first three years as the head coach.”

After qualifying this season after shooting an 83 at the district meet for fourth-place, Crum became the first Thunderbird to qualify for the state meet twice after three before him each made it once. Kyle Latham in 2013 was the most recent one to golf at state for North Callaway, finishing 58th. Gary Wathen took 76th place in the 2011 championships, and Erik Meyer — Kayln Meyer’s brother — owned the previous best finish in program history after tying for 52nd in 2008.

Meyer said she is grateful for Crum in giving her valuable experience in her early tenure as a coach and is happy for all that Crum has accomplished as a Thunderbird.

“Thomas is the first two-time state qualifier we’ve had in program history so it doesn’t happen very often,” Meyer said. “As a coach, my first year got cut short because of COVID-19. I didn’t have much experience heading into my second season and then Thomas got us to state two years in a row. I can definitely thank Thomas for helping me gain some of that experience.”

Crum even had a shot at earning all-state honors after finishing Monday tied for 14th with an 86, shooting a 39 in his first nine holes for one his best nine-hole scores of the season. The senior had a worse performance Tuesday, but not by much, as he finished the day with an 89 after bouncing back after some bogeys on the first few holes by adjusting to the fast greens at Columbia Country Club and to the longer tee shots reserved for the state tournament.

Meyer said Crum seemed to have that confidence this time around that he didn’t have in his first state meet last year at Silo Ridge Country Club in Bolivar. While there were still nerves on Day 2 after noticing how close he was to all-state, Meyer believes Crum finished strong and displayed why he has had such a good year.

“It took him a while to settle down, but that just shows how much the kid cares, how passionate he is about the game of golf and how much he cared about being in that moment,” Meyer said. “When greens are that fast, the difference between putting uphill and putting downhill, there can be quite a big difference. After Day 1, putting and short game was definitely the adjustment he had to make.”

Crum graduates as the probably most decorated golfer in program history, Meyer said, including winning an Eastern Missouri Conference championship this season against boys that finished ahead of him at the state meet — Bowling Green’s Brayden Buffington and Montgomery County’s Keenan James and Logan Hutcheson.

This skill owned by Crum didn’t come naturally as Meyer said Crum has a summer job at Arthur Hills Golf Course in Mexico, where he works to maintain the course and his game. Meyers said Crum has put in a ton of work on that course during the summer to complement his in-season practice.

The course, however, holds special importance to Crum beyond a summer occupation and practicing ground. Crum said he has been golfing since he was four or five years old when his father piqued his interest and passion for the sport on the Mexico course. Crum recalls getting his first set of clubs at seven years old.

“It was a little junior set, but I would just kind of chip and hit a drive out the fairway or something,” Crum said. “I would go with dad at Arthur and just hang around in the cart. We used to watch a lot of PGA Tour events on the TV. Seeing them and how good they were, I wanted to challenge myself to do something.”

In the summer, Crum said he has worked with Danny Dollens, whose children have golfed for University of Missouri, at Arthur Hills to make his putting more consistent. That has helped Crum this year to have a better season and rise in the standings from his 40th-place finish last year at state.

While short game is important in golf, the mental game can loom larger in competition, and Crum said that has taken his career to the next level this year.

“I think just mentally, my biggest problem was trying to pay attention to other people’s scores instead of just worrying about my own,” Crum said. “I think knowing that I know I’m not going to birdie every hole, might not even par every hole, but if I make a mistake, I know how to get out of it. Don’t try to do too much, just play your game and understand your limitations.”

Crum said he is appreciative of all the coaches he’s had in his time at North Callaway that have made sure his mind was in the right place. He said his teammates have been supportive, yet honest, when there needs to improvement as he is with them, adding to an “open” dynamic within the team, and the athletic directors have also poured much time and effort into Crum’s game.

Meyer is as appreciative for Crum has put into the program and the example he leaves behind.

“I’d love to be able to take more credit for all of the success that Thomas has, but it’s definitely driven his love and his passion for the game and the work that he puts in even outside of the season,” Meyer said. “He’s just meant a lot to the program. We’ll definitely miss him, but he has taught his teammates some really important lessons.”