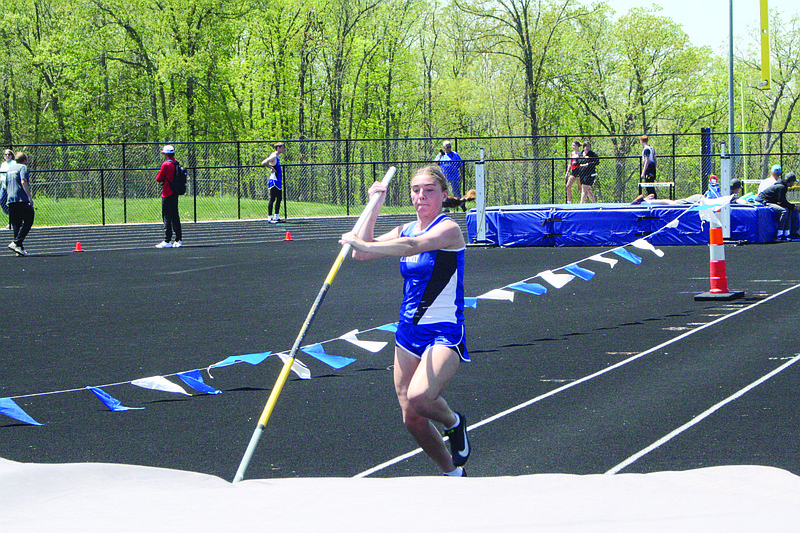 South Callaway’s five state qualifiers for the Class 2 state championships this week aren’t in any running events but have been overcoming hurdles this season.

Head coach Bill Frazee said Mealy, who will be competing in the boys’ pole vault and javelin, has gone through a lot just to compete this season, let along qualify for state the second straight season. Mealy earned all-state honors after finishing eighth in the pole vault a year ago, but months later during football season, he sustained a season-ending knee injury. Frazee said Mealy had to have his knee reconstructed so it has been remarkable that Mealy is in the running once again at state this season after finishing third at sectionals in the pole vault at 3.19 meters and fourth in the javelin with a season-best 44.28 meters.

“We’re tickled to death that he can even walk and run at this point after the major trauma he had to his knee,” Frazee said. “It is something that we match only to what (Hannah) Oberdiek did her senior year when she shattered her femur and then came back and was a state champion.”

Mealy is getting close to the speed he once had while competing with a bulky knee brace, Frazee said, so that is encouraging given the importance of a running start is to the pole vault and javelin.

Frazee said Mealy is “as mature of a senior you can probably expect” so a setback like snapping a pole during a practice Tuesday shouldn’t affect him, and his competitive drive should have him ready.

Dickinson is also returning from a state berth last year in the discus, when he finished 12th with a throw of 39.8 meters. Frazee said Dickinson has ground to make up this season to be all-state, but it wouldn’t be the first time he overcame odds. At the sectional meet Saturday, Dickinson had three athletes projected to finish ahead of him that he needed to beat to earn the fourth and final state qualifying spot. He tossed the discus 40.5 meters to take fourth and now he has his sights set on more.

“He knows what the competition is like at the state meet,” Frazee said. “He’s a calm, cool, collected kid. He maybe doesn’t show that there’s pressure there. It doesn’t seem to bother him. He loves the competition.”

Frazee said Dickinson even talked with him before Saturday’s meet about Dickinson wanting to prove he was as good as the three throwers in front of him and is glad he gets a chance to prove himself again when there are several at state so close together. Frazee said it depends now on “who wants it the most or the pressure is not going to affect them,” which sounds just like Dickinson.

For the girls, Brown has had health issues from the tail end of basketball season and had a late start to her track and field season, Frazee said, which has made her fresher for competition late in the season. Brown, who has an “endless” potential according to Frazee, was a three-time district champion before becoming the long jump sectional champion with her personal-best time of 5.27 meters.

Brown reminds Frazee of Oberdiek, as well, in the sense Oberdiek excelled in the long jump for South Callaway years ago. Oberdiek won the state title in 2014 with a mark of 5.18 meters and in 2015 with a jump of 5.49 meters.

“She’s as fresh now, we hope, as she has been all year long,” Frazee said. “She’s mimicking closely what Hannah did in the regular season. We’re just hoping she can mimic what Hannah did at the state meet as well.”

Mathews owns the school’s girls pole vault record after reaching 3.02 meters to finish second at sectionals and has been steadily improving all season long, Frazee said.

Frazee said the biggest thing the coaches have worked with Mathews for is improving her speed as it is vital when it comes to her event.

“It relies on your speed — how fast you are and your ability to be able to convert that speed when you get to the pit,” Frazee said. “She has really worked at that this year. She used to be a young, gangly kind of running type of athlete, but she has really worked on her running form and that’s been directly related to her great improvement.

Frazee said it will depend on how Mathews and the other athletes respond to pressure as athletes can always jump better in practice than state competition, when only three attempts will be allowed. He believes she is able to hit 3.05 meters but will be happy if she can match her sectionals mark.

Pontius has been someone who has improved on her own school record in the girls’ javelin for three straight meets now, Frazee said. She initially broke the record April 21 at a home meet with a mark of 32.9 meters and finished third at sectionals with a throw of 35.51 meters.

“We are really anticipating that that’s going to continue,” Frazee said. “We’ve worked pretty hard this week on technique and form because, at this point, that’s really what it comes down to.”

Frazee believes Pontius will make the finals if she matches the distances she’s reached this year, and from there, Pontius is an athlete that can perform under pressure and shatter her own record yet again.

“They’re all peaking at a great time,” Frazee said. “It’s if we can just match that peak performance (today).”