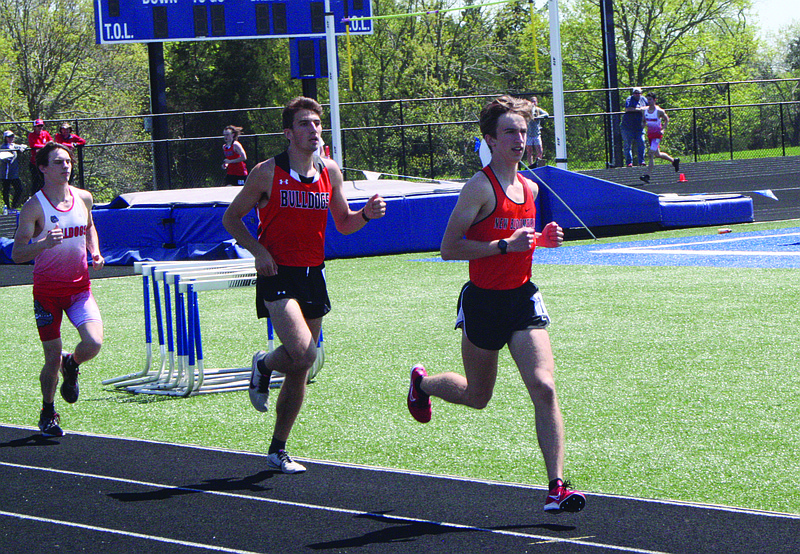 For the New Bloomfield boys competing today and Saturday at state, records along with medals are within reach.

Head coach Jacob White said all of his remaining runners have set school record or believe they can do so at state this year, including Hinrichs, who will be running in the 3,200-meter run today and the 1,600-meter run Saturday.

Coming off a runner-up performance at the cross country state championships, White said Hinrichs had a slow start to his track season as he was dealing with a minor leg muscle injury after running at the first two meets. Hinrichs had to sit out until the Show-Me Conference meet in April and has competed in 4-5 meets all year. Still, White said Hinrichs has a good chance to finish in at least the top three after he ran season-best times — 4:30.48 and 10:04.46 respectively — for sectional championships in the 1,600 and 3,200.

“He’s in pretty good shape,” White said. “I think he’s in the top three, for sure, in both races based on times this season. He’s very adamant that’s he’s going to run certain times. He says he wants to get up front and try to win both of them.”

With his decorated history, including an all-state third-place time of 9:38.84 in the 3,200, Hinrichs has trained through injuries before and knows what it takes to be adequately prepared with less season experience, White said. Hinrichs thinks he can achieve his 3,200 personal-best of around 9:25.00, which would have been first last season, White said, and set a new 1,600 school record of 4:29.88 set by Caleb Distler last year.

White said he thinks Dawson has a good shot to make the finals in both races this season as he has been in the top three in every meet in the hurdles this season. Dawson is ranked fourth in the 110-meters based on times and is in the middle of the pack in the 300 meters, White said, and is aiming to improve on his 110-meter school record and to break the 300-meter school record of 41.19 owned by 2019 all-state athlete Easton Ambler.

“He went to state last year, and he got some experience so he’s definitely prepared more,” White said. “If you can get to the finals in the hurdles, it is anybody’s race.”

White only recalls one meet this season where Dawson hasn’t medaled in the hurdles, when he false started in the 110 meters, but forced himself in the conversation of conference MVP. Dawson finished second in the standings at the Show-Me Conference meet this season with 29 points behind Hinrichs’ 30 points. With Hinrichs hurt much of this season, Dawson scored the most points for the Wildcats this season and will be relied upon when Hinrichs moves on to run for Pittsburg State next year.

“He can jump, he can run mid-distance, he can short sprint, he can do relays, he can throw the shot put and he’s a good kid,” White said. “He was very close to taking that from Nate.”

New Bloomfield has had several podium finishes this season in its relay races, especially on the boys side, and had teams competing in all four races at sectionals. The 4x400-meter team came out of the weekend as a state qualifier and has its eyes on big things this weekend, White said.

The “seasoned 400 runners” of Brooks, Pitzen and Figard have worked well with a blossoming Speaks, White said, finishing third at sectionals with a time of 3:34.57 after taking the runner-up spot at districts with a time of 3:40.22. The four athletes believe they can lower their time to below 3:30, if not break the school record time of 3:27.24 set by the runner-up Wildcats at the 2017 state championships.

“It all starts coming together at the end of the season usually by our 4x400s,” White said. “We’re sitting in the middle of the pack in that one, but the pack of second place all the way to 10th place is all within a second or two seconds of each other. I think they’re going to find a way to sneak into the final.”

White said every second matters in relay races. The Wildcats finished behind Harrisburg by less than a second and were about a second ahead of Harrisburg at sectionals but just three-hundreths of a second behind runner-up Mark Twain. The baton handoff can make the difference.

“In the 4x400 and the 4x800, you still got to have good handoffs,” White said. “You’ve got to keep the baton moving through the exchange. The more ground you can cover on that handoff, the better the exchange will be to really shave some time off the relay. We worked on those handoffs a lot in the 4x400. I think the kids will all be on the same page.”