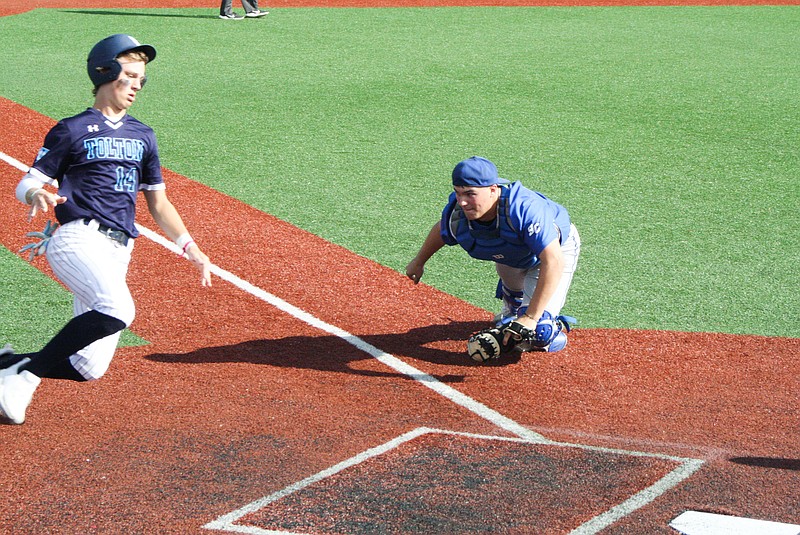 The Bulldogs lost 5-2 to Class 3 District 7 top seed and 10th-ranked Father Tolton 5-2 in the district championship game in Mokane. South Callaway was limited to five hits and put runners in scoring position thanks to five Tolton errors but couldn’t scratch enough runs across.

Head coach Heath Lepper said his team still showed the fight and guts it has had all season, as the team tallied six at-bats that each lasted more than five pitches, but the results just didn’t go its way Wednesday.

“They can take away from what they took away from the last game,” Lepper said. “They fight, and they’re a gritty ballclub on both sides of the plate. At the plate, they were gritty. They can take pride in the way they play the game.”

South Callaway’s golden opportunity came in the sixth inning. Tolton’s Justus Martin committed Tolton’s fifth error on a ground ball hit by freshman Ethan Edwards, giving senior Jacob Lallier the green light to round third base for home. He was thrown out after catcher Jacob Hoernschmeyer swiped him with the tag while Lallier hooked to the left side of the plate.

The bases were loaded with one out after a pinch-hit single by junior Tanner Marty. Senior Trace Helsel hit a ground ball to third baseman Jake Ryan, who made the throw home to Hoernschmeyer for the forceout.

No Bulldog runs scored that inning after a few calls that didn’t go South Callaway’s way, Lepper said. On the second play at the plate, it was questioned whether Hoernschmeyer had possession of the ball or dropped it on a transfer to make an ensuing throw. Regardless, Lepper said the Bulldogs have to control what they can, and he believes South Callaway had the right approach all game.

South Callaway had to play from behind after one inning as Tolton’s offense scored three runs in the frame. Tolton starting pitcher, Logan Thompson, drove in a run to follow his two RBI on Monday against North Callaway, and then Lucas Wietholder and Martin each came through with two outs to drive in runs against junior Jacob Martin.

The Bulldogs rallied in the second inning with two outs, starting with Edwards’ single for the first Bulldog hit. Freshman Tucker Jones and Helsel each reached on tappers back to the pitcher’s mound that turned into errors as Edwards scored on Helsel’s high-bouncer, making it 3-1.

Tolton (14-3) showed some fight at the plate several times, including Cameron Lee’s at-bat in the bottom of the second inning that saw four foul balls and a sacrifice fly to make it 4-1.

One game after his six pitch at-bat to start a winning rally in the seventh inning against Montgomery County, junior JT Thomas saw seven pitches before drawing a walk in the third inning Wednesday. He stole second base before Lallier took a pitch the other way to make it 4-2.

Martin allowed 10 hits, five runs and three walks and didn’t strike out a Trailblazer until he notched both of his punchouts in the sixth inning, but he kept Tolton off the scoreboard in the third inning, stranding two runners in scoring position. Tolton went into Wednesday averaging 9.8 runs per game after scoring 11 runs in five innings against North Callaway on Monday, so Lepper thought Martin and the defense showed grit to keep the Bulldogs in the game.

“Defensively, we made some really nice plays, and our pitcher kept gutting it out,” Lepper said. “(Martin) kept attacking. They are a great hitting ballclub so it didn’t matter whether there was a guy on first or a guy on second or third, he just kept pounding the zone and trusting his defense.”

The South Callaway offense stranded a runner at second base in the fourth inning after Helsel reached on an error and stole second base. Sophomore Ryan Lepper had the longest at-bat of the game at 10 pitches in the sixth inning before Tolton hung on to keep the Bulldogs from scoring.

Jake Ryan drove in a run in the bottom of the sixth inning, making it 5-2, prior to Martin striking out two and picking him off first base to end the inning.

Heath Lepper said South Callaway has tried to get better on every pitch and every at-bat this season. He believes they did that again Wednesday.

“Our kids had an approach every time they went up there,” Lepper said. “They battled from the first pitch to last. As a coach, that’s all you can ask of them.”

Now the careers of the team’s seniors like Helsel, Lallier and Tristan Smoot are over, Lepper said he appreciates all those players did for the program, including the previous two seasons with younger rosters.

The Bulldogs had four underclassmen in the starting lineup Wednesday compared to the previous year’s season-ending loss, when they had seven in the lineup. South Callaway improves from last season’s 10-19 record and 3-4 Show-Me Conference record to an 14-15 overall record this season while going 4-3 in conference.

“Our seniors did a great job leading the way all year long,” Lepper said. “They set the tone for the work ethic. We wish those guys the best. Our younger guys, hopefully, will stay hungry and start preparing for next year tomorrow. That’s the way it works.”