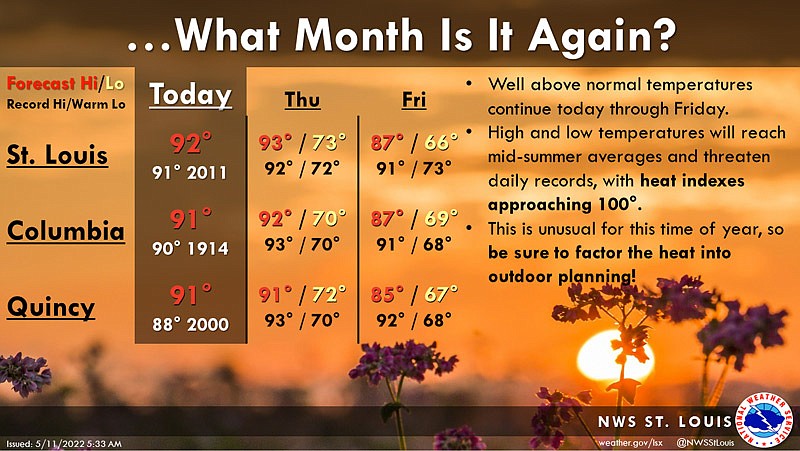 It's hot. That mid-summer kind of hot that wilts a person.

And it's way too early for this kind of heat.

Marshall Pfahler, a meteorologist with the National Weather Service in St. Louis, said Tuesday the temperature reached an all-time record high for May 9 of 92 degrees in Columbia, an official site for the service. The previous record was set in 1895.

Similar hot temperatures are predicted for today and Thursday.

"We could be dealing with another daily record for (Wednesday)," Pfahler said.

"We're not quite as confident we'll see record high temperatures that day," Pfahler said. "It will be pretty darn close. We're dealing with some afternoon heat index values that are flirting with 100 degrees."

As the heat climbs, people are looking for opportunities to cool down.

"Anybody who needs reprieve from the heat is welcome to come in and cool down and have some water," Vogeler said.

The center also offers cots for people to stay on when overnight temperatures are expected to remain high, but only a few people had taken advantage of the cooling cots.

Vogeler pointed out the climbing temperatures are a good reminder to check air conditioners. The Center of Hope turned its air conditioning on early Tuesday for the first time this year, but it only partially worked. Technicians were to repair the rest Tuesday afternoon.

Unfortunately, the heat comes as the Jefferson City Housing Authority completes renovations to cooling systems in Dulle and Hamilton towers -- the low-rent apartment buildings at 10 and 12 Jackson St.

Timing for this heat wave is a challenge, said Michelle Wessler, Jefferson City Housing Authority executive director. The authority just installed a new cooling tower in Dulle Tower, but it's not scheduled to come online until Thursday. The authority also did major renovations in Hamilton Tower, replacing cooling tower pipes that leaked. Work in Hamilton Tower isn't scheduled for completion until Friday.

"There's really nothing at this point we can do until the chillers and the cooling towers get back online," Wessler said. "They're ready to go -- it's just a matter of timing."

Staff at the authority are asking residents to open their windows and use fans to try to cool off.