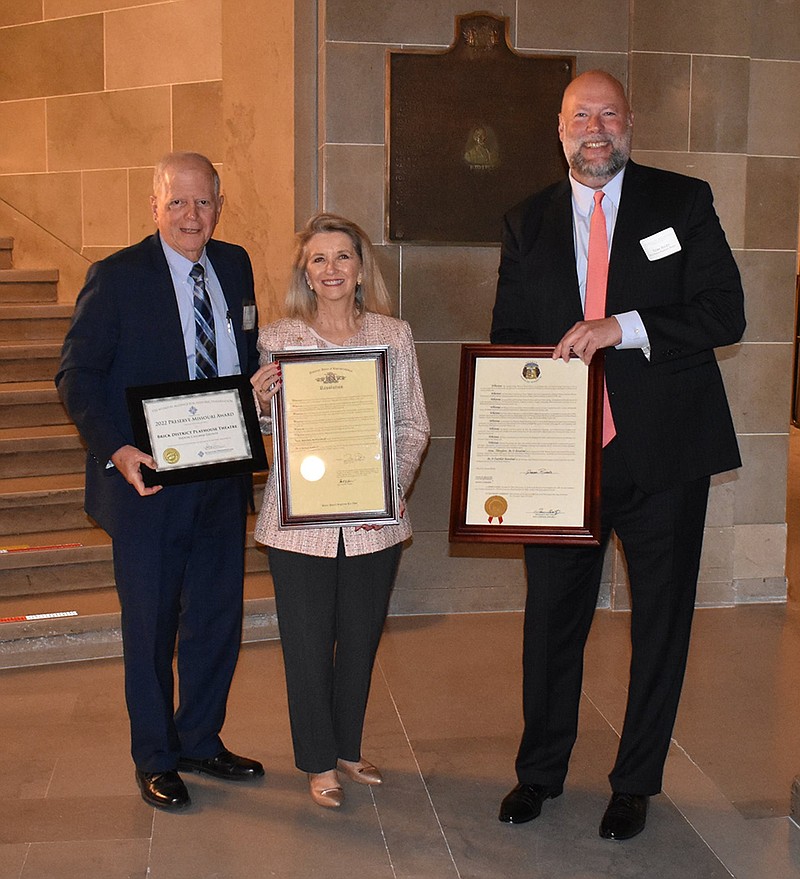 The Playhouse received a Preserve Missouri Award last month at a ceremony in the Capitol first floor Rotunda in Jefferson City.

“We are all deeply honored to be recognized by the State House of Representatives, the State Senate and Missouri Preservation for our work on the Fulton theatre,” said Tom Riley, president of the Playhouse board. “To receive an award as one of the outstanding projects in the entire state came as a wonderful surprise and I want to thank the City of Fulton and the Callaway Historical Society for the nomination.”

This was the 42nd annual Honor Awards held by Missouri Preservation. The awards recognize people and projects that have advanced the field of Historic Preservation in Missouri. This year, 11 recipients were recognized for their contributions, including individual building projects, long-term preservation initiatives, published works and lifetime achievements.

The Preserve Missouri Award recognizes projects across the state. The Playhouse was one of six recipients: two in St. Louis, two in Clay County and one in Jackson County.

Riley said receiving the award is a good morale boost for the volunteers.

“When your project transitions into an operational phase based on a cafe and events, a pandemic really doesn’t help,” he said.

The Playhouse was originally built in 1927 by The Glenn Realty Co. at 613 Court St., Fulton, for vaudeville productions and motion pictures. It opened in 1928 and operated for nearly 80 years. The original theater could seat 1,000 patrons — 650 on the main floor and 250 in the balcony.

The theater changed hands several times, the last in 1979 to B&B Movie Company, which donated the building in 2005 to the Fulton community when the Callaway Arts Council was formed.

Since 2005, several organizations (including the Callaway Arts Council) and individuals have worked to preserve and renovate the theater. In 2015, the Brick District Association took over responsibility and gave the Playhouse, a nonprofit charitable corporation, its own board of directors.

“Now that we’re ready for a new phase to complete the balcony renovations, it is especially gratifying to see the recognition of what has been done so far,” Riley said. “This has always been a challenging task and we would not gotten this far without private and public help from the city, county and state. To hang the resolutions along side this award in the cafe, across from Regan’s Kings Row suit, where there had been nothing just a few years ago was a great moment. I hope we have some more.”