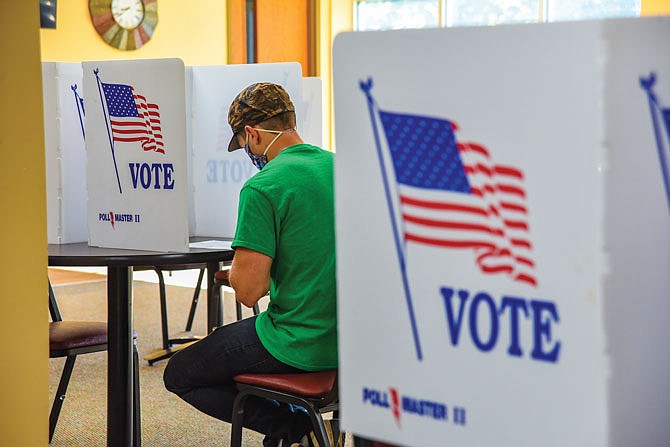 Jon Freeland, secretary for the Cole County Democratic Club, can be seen marking his ballot Tuesday, June 5, 2020. About 45 registered voters in the Ward 4, Precinct 1 polling place, located inside Our Savior's Lutheran Church on Southwest Boulevard, had cast their ballot in the municipal election by 9:15 a.m.

Efforts to implement a "ranked-choice" method of voting that would replace Missouri's partisan statewide primary elections are gathering signatures.

The group Better Elections is circulating an initiative petition that would amend Missouri's Constitution, with the intent of allowing voters more choice in who represents them. The ranked-choice method allows voters to vote for any candidate during a combined August statewide primary.

Candidates will still show their party affiliation on the ballots.

However, choosing to rank the candidates can give the voter some say in how the election turns out, even if their candidate is eliminated.

The top vote-getter must receive 50 percent of votes cast (plus one) to win the election. If the candidate does not receive 50 percent of the votes, the votes for the fourth-place finisher are thrown out. Election officials would then look at ballots from those voters who chose the fourth-place finisher. They would apply the voters' second-place votes to the remaining candidates.

Should one top 50 percent plus one vote, they win.

The process would continue (looking at the ballots that preferred the third-place finisher) if that effort did not determine a winner.

If organizers gather enough signatures, and if voters approve the change, it would apply to all statewide offices (governor, attorney general, auditor, lieutenant governor, secretary of state and treasurer), congressional seats and Missouri General Assembly seats.

Scott Charton, a spokesperson for the initiative's campaign, said the initiative has acquired signatures from every county in Missouri, and the City of St. Louis.

The milestone, he said, indicates the broad support the initiative is garnering.

In Missouri, the initiative process requires that initiative organizers gather signatures equal to 8 percent of votes cast in the previous gubernatorial election.

The 8 percent threshold must be met at six of Missouri's eight congressional districts. The minimum number needed for the six lowest-turnout districts would equal 171,592 signatures.

Charton would not say how many signatures the campaign had acquired, but said organizers are confident the initiative will gather enough to go on a ballot before their May 8 deadline.

"Missourians are telling us they want more choices in elections," Charton said. "They like the provisions in our proposal."

They like the provision that eliminates separate Democratic and Republican primaries, he said.

Under the current system, where voters are restricted to a party during the primary, government limits freedom to choose any candidate, he continued. Through the ranked-choice system, voters -- and neither a party or a special-interest group during a small-turnout election -- selects who goes on to the November election.

"We're finding extremely strong support in the field from voters -- about election security improvements," he said.

The initiative would require that voting machines are working properly before any ballots are cast, require a paper trail for all ballots and require all parties have rights to watch as votes are counted.