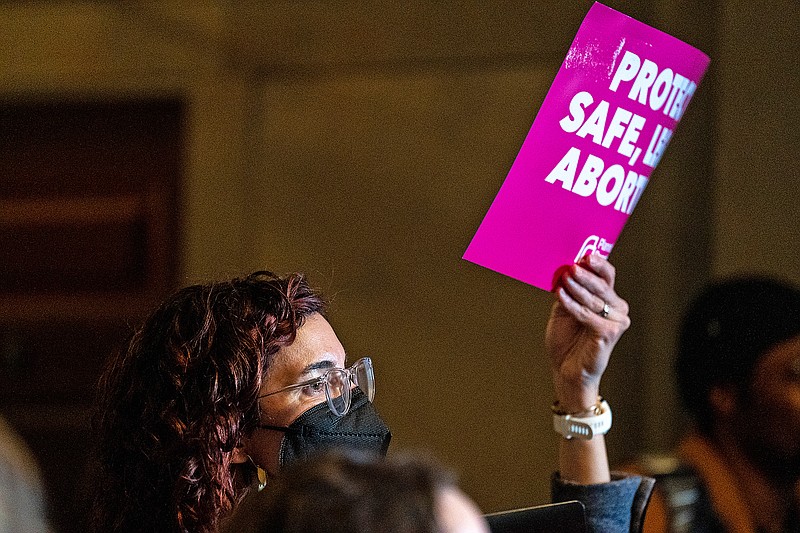 Catherine Betz holds up a sign during a Pro-Choice Missouri rally on Wednesday, March 9, 2022 at the Missouri State Capitol Building. “Abortion is essential healthcare,” Betz said. “It is important that all families have that as one of their options … I want to live in a state where everyone has access to that healthcare.” (Ethan Weston/News Tribune photo)

JEFFERSON CITY -- The testimonies were heartfelt, the voices were strong and the message was clear Wednesday afternoon at the Capitol -- more justice in reproductive health care.

Dozens of pro-choice advocates gathered in opposition to anti-abortion bills at a Senate hearing and later moved through the Capitol's hallways in a protest.

Initially, three anti-abortion Senate bills were planned to be discussed at the hearing, but due to a filibuster on the Senate floor, the hearing was delayed and only Senate Bill 753 was heard.

The bill, which would establish the "Born Alive Abortion Survivor Protection Act," outlines additional rights that would be established for a live-birth after an abortion. Similar legislation has also been proposed in the House.

"If a child survives an abortion, he or she should be treated with the same degree of medical concern and attention as any other child born prematurely for at the same stage of development," the bill's sponsor, Sen. Eric Burlison, R-Christian County, said at the hearing.

Doctors and medical professionals at the hearing testified about the damage SB 753 could cause if passed.

"This legislation represents unwarranted interference in the patient-physician relationship. It's based on inflammatory language and grossly inaccurate descriptions of OBGYN's (obstetricians and gynecologists) and the patients that they care for," said the vice chairwoman of the Missouri section of the American College of Obstetricians and Gynecologists (ACOG).

"Although this bill was written with abortion providers specifically in mind, its impact will be felt more broadly on obstetricians, perinatologist and neonatologist," she added.

One practicing obstetrician and gynecologist and maternal fetal medicine specialist, Daniel Jackson, shared his confusion on how the bill is pro-life.

"There are some babies with birth defects that we diagnosed in utero... that 100 percent, with no exceptions, are not compatible with life outside of the womb," Jackson said. "When the baby delivers, it will die within hours and minutes."

Under SB 753, "I'm going to pull that baby away from her (the mother), do chest compressions, break that baby's ribs and then hand it back to her after it's passed away," he said. "Senator -- all due respect, that's not how I see respect to life."

Along with the many doctors and medical professionals at the hearing, volunteers, and members and supporters of Pro-Choice Missouri and Planned Parenthood came to testify against the legislation.

"Abortion is normal and a fundamental human right ... people who have abortions deserve dignity and respect," an individual testifying at the hearing said. "These bills will cause lasting harm to Missourians, their family and their loved ones."

Though not everyone who came to testify in opposition of the legislation was able to speak at the hearing, a thick stack of witness testimonies were left in the chamber.

Three testimonies in favor of SB 753 were made Wednesday from Missouri Right to Life, Concerned Women for America and a Boone County resident.

Following the brief hearing, many of those who testified in opposition to the bill gathered in a nearby hallway to protest anti-abortion legislation.

Their voices echoed through the halls of the Capitol and garnered the attention of many who were in offices and other hearing rooms.

"We are not here to be regulated and have our health care denied," said Molly Schwarz, executive director of Pro-Choice Missouri. "These lawmakers are not serving the interest of the people they represent."