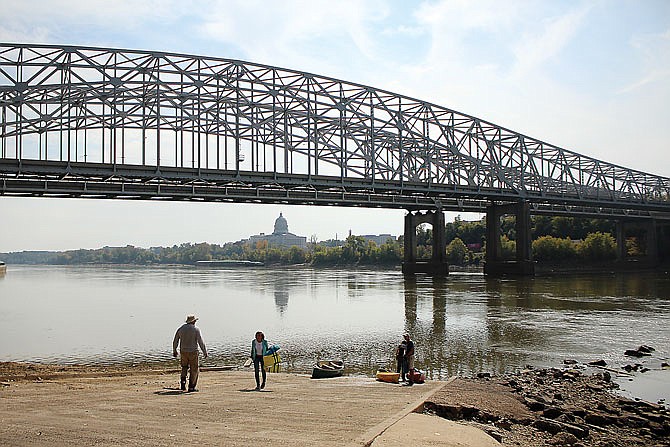 The Jefferson City Bridge is positioned over the Missouri River with the Missouri state Capitol in the background.

JEFFERSON CITY, Mo. -- In 2018, Sal Litrico went to Jefferson City to talk about what a potential Missouri River port would have to include to be attractive for customers.

Four years later, the CEO of a Miami shipping company is again visiting Missouri’s Capital City as his company is moving forward with their plans to begin transporting cargo in container ships on the Mississippi River and eventually on the Missouri River.

During a presentation Monday night to the Heartland Port Authority and invited guests, Litrico said their main facility will be built in New Orleans and the first stop will be Memphis. They have enough cargo commitments for the company to build four ships that will run between these two stops and they plan to be in operation by April 2024.

Last year, APH announced plans to build a container port facility in Herculaneum that would serve the Midwest region. That facility is expected to open in the fall of 2024, six months after the Memphis facility is opened.

What happens next is to be determined.

Litrico said officials in Kansas City have received a $10 million grant for work on a port that would be able service APH boats and they have more than 400 acres of land along the Missouri River to work with.

Whether or not Jefferson City would be a stop is up to how the Heartland Port develops.

The boats APH would use would be 134 feet long, 106 feet wide and have a 41 foot height. Litrico said they have been designed to pass under the bridges they would encounter on the Missouri between St. Louis and Kansas City. They would be able to hold up to 1,860 containers. Each of those measure 20 feet.

The boats would also be able to operate in depths of 7-10 feet. Some of those in attendance Monday mentioned the U.S. Army Corps of Engineers only has a navigation season on the section of the Missouri River in this area that lasts April 1-Dec. 1. So the water levels during the winter don’t allow for transportation.

Litrico said they have been talking with the Corps about the possibility of a yearlong navigation season, showing the potential for economic development with the added boat traffic.

“We’d like to operate with a 9-10 foot depth, but we wanted to be capable to operate down to seven feet,” Litrico said. “However, if you get that low, you have to leave more cargo on the docks because you can’t be as heavy.”

Agriculture exports are expected to be the dominant cargo as Litrico noted 85 percent of soy exports go down the Mississippi River. Other products that could be shipped include forest products, something a study by the Heartland board found would be one of the bigger shipping potentials in Central Missouri.

“New ports must be made to adapt to new technology and to handle new ships,” Litrico said. “Ports should be built with future technologies in mind. Don’t think small, think big. You need to have that footprint in mind. You’ve got to build phase one, but be prepared for phase 3, and don’t limit yourself to that.”

As far as what Litrico suggested Jefferson City needed to work on to get a port started:

• Secure a high volume shipper that would like to see savings. Litrico said studies have shown there is a 25-55 percent savings when using all water transportation.

“You also have to secure your financing and showing the shippers the amount of savings they will see is key to that,” Litrico said. “Shippers need another option because the problems we’re seeing at the ports on the West Coast (with delays of cargo sitting on the ground and not being loaded) is not going away. So you need a new system with no constraints like what we’re offering.”

If all this happens and a Heartland Port would be built to align with the vessels APH will be using, Litrico believed a facility in Jefferson City might be ready by 2025.

There was no discussion on whether or not a port would be best on the north side of the river or the south side. Litrico said the group should consider developing a port as a consolidation location where you can bring products to the site and get it ready for shipping at the site, which would mean further savings for the shipping customers.