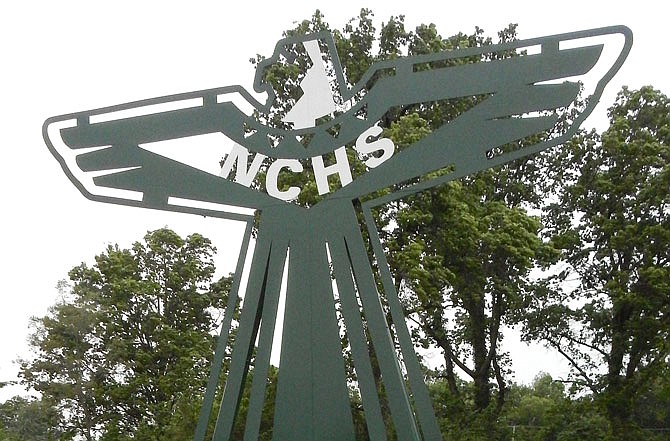 The Thunderbird sculpture at North Callaway High School is shown in this Fulton Sun file photo.

Students at North Callaway Middle and High schools will have new rules for cellphone use.

The school board approved a new policy last week that limits cellphone use to outside of school hours.

Under the policy, students can have their phone in their backpack, but it can't be out during or between classes.

Both schools tested the policy during the last month of school before deciding to go forward with it.

"For the first three days, it was an absolute bear," he said. "But after they got past that point and the kids realized, 'OK, this is the way it's going to be,' everything was good and they have not had any problems."

The move comes in an attempt to keep students focused on school and teach there's an appropriate time and place to use cellphones.

Under the new policy, if a student is found with their phone out, they'll be directed to take it to the office, where it goes in a plastic bag with the student's name and held in a drawer.

High school science teacher Kalyn Meyer, who served on the district's committee on the matter, said the conversation about cellphones came from the issue of students using them during class time.

The district already had a policy that restricted cellphone use to between classes and during lunch.

Meyer said the plan is to create a guide for teachers on how to handle a situation with cellphones in the classroom.

"If a kid refuses, then we go to the next steps," she said. "You call the administrator, the administrator comes to your classroom. We are planning on scripting out all of these things so everybody knows exactly what to do in these situations. And for those teachers that aren't as comfortable with a potential confrontation, hopefully this helps give them a little bit of confidence there."

The policy change was approved by the board unanimously.