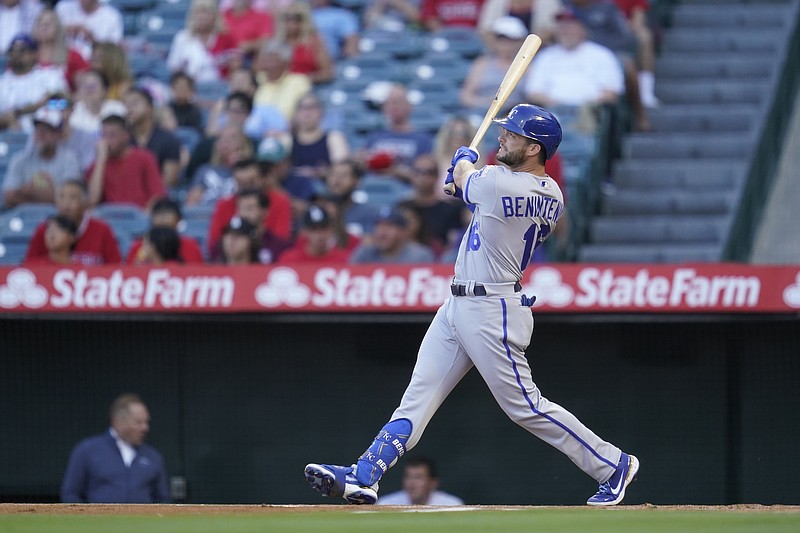 Andrew Benintendi of the Royals hits a home run during the first inning of Monday night's game against the Angels in Anaheim, Calif. (Associated Press)

ANAHEIM, Calif. (AP) -- All the small things are starting to add up to big results for the Kansas City Royals.

The Royals got some timely hits and another solid outing from their starting pitcher as they won for the fourth time in the last five games Monday night.

Andrew Benintendi, Salvador Perez and Hunter Dozier homered, Nicky Lopez drove in the go-ahead run in the seventh inning and Kris Bubic got his first victory of the season in the Royals' 6-2 victory against the Los Angeles Angels.

"The big hits, the pitching, just all the little components we've been wanting to see everything put together and we've had that in the last few games. It's important for our guys to see it and know what to expect," Royals manager Mike Matheny said.

Kris Bubic, who came into the game as one of four pitchers in the majors to have at least eight starts and no wins this season, struck out a season-high seven in six innings to improve to 1-4.

"As a pitcher, if you did your job the results kind of take care of itself," said Bubic, who gave up two runs on six hits and walked two in six innings. "The offense getting on the board early gives you a little more confidence especially early on to attack, trust your stuff and go from there."

Taylor Ward had two hits -- including a homer in the third inning -- and drove in both runs for the Angels. Los Angeles had come in with some momentum after taking four of five in Seattle, but managed only seven hits.

"I thought we had some good at-bats. Were they consistent throughout? Probably not, but we did hit a lot of balls hard," manager Phil Nevin said.

Noah Syndergaard worked into the eighth inning for only the second time in 11 starts, but struggled at the end. Syndergaard (4-6) allowed five runs on eight hits in 7⅓ innings. The right-hander struck out five and walked two.

"He pitched out of some trouble here and there. Truth be told, we needed to score more runs and we didn't do that," Nevin said.

The game was tied at 2 when Dozier singled to center to lead off the seventh. He stole second and came home when Lopez lined a double to right.

Benintendi and Perez both had two-run shots as the Royals won for the fourth time in five games.

Whit Merrifield led off the game with a base hit before Benintendi drove a 94.6 mph fastball from Syndergaard into the seats in right-center to give the Royals a 2-0 lead four pitches into the game. Benintendi finished with two hits after he went 5-for-23 during the first six games of the road trip.

Perez chased Syndergaard in the eighth inning with a blast to center to make it 5-2. Dozier added a solo homer later in the frame off Jaime Barria.

Perez is a career .326 hitter (56-for-172) in 43 games against the Angels. That's third among active players with at least 150 career at-bats against the Halos.

The Angels got within 2-1 in the third inning when Ward connected on Bubic's changeup and put it into the Royals' bullpen in left field. Ward is third on the Angels with 11 home runs, but it was his first since May 29 against Toronto.

He then evened it at 2 in the fifth inning with a line drive to center to score Andrew Velazquez. Ward tried to extend it to a double but was thrown out by center fielder Michael A. Taylor, who made a quick throw to second baseman Whit Merrifield to easily get Ward.

Notes: Royals C Cam Gallagher was activated off the injured list after he missed the last 45 games due to a strained left hamstring. RHP Matt Peacock was optioned to Triple-A Omaha to open a spot for Gallagher and get down to the MLB limit of 13 pitchers on a roster. ... Angels 3B Anthony Rendon had season-ending surgery on his right wrist. ... Royals RHP Jonathan Heasley (1-3, 3.72 ERA) has not allowed more than three earned runs in his seven previous starts. ... Angels LHP Reid Detmers (2-3, 4.25 ERA) is 0-2 with a 4.91 ERA in five starts since throwing a no-hitter against Tampa Bay on May 10.