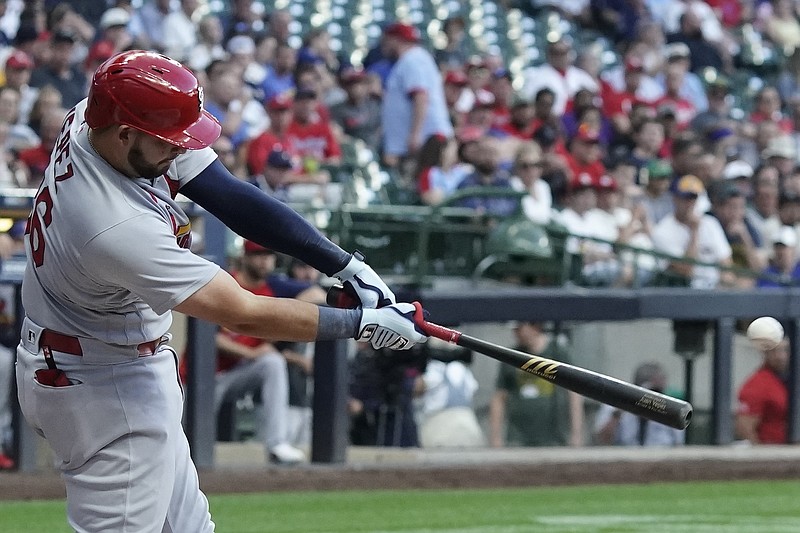 Juan Yepez of the Cardinals hits a double during the second inning of Monday night's game against the Brewers in Milwaukee. (Associated Press)

MILWAUKEE -- Corbin Burnes continued his recent mastery of the St. Louis Cardinals, allowing the Milwaukee Brewers to overtake their division rivals for first place in the N.L. Central.

Burnes pitched seven dominant innings and Tyrone Taylor hit a two-run homer in the Brewers' 2-0 victory Monday night against the Cardinals. The Brewers and Cardinals were tied for the division lead as they began this four-game series.

"I try not to make any game bigger than it is," Burnes said. "It's still mid-to-end of June, playing baseball. We've still got a lot of games left. If you start making one game bigger than the other, you start putting extra pressure on yourself and start trying to do too much."

The Brewers have followed an eight-game skid by winning six of eight.

Burnes (5-4) struck out 10 and allowed just two hits and two walks as he delivered an ace-caliber performance to help a staff that's at far less than full strength with Brandon Woodruff, Freddy Peralta and Aaron Ashby on the injured list.

"I thought Corbin was as good as we've seen him this year," Brewers manager Craig Counsell said.

The N.L. Cy Young Award winner's performance was remarkably similar to his May 29 outing in an 8-0 victory at St. Louis.

The only two hits he allowed Monday came from Juan Yepez, who had a two-out double in the second inning and a two-out single in the seventh.

"His stuff's electric," Cardinals manager Oliver Marmol said. "We know it is."

Devin Williams retired the side in order in the eighth and Josh Hader worked the ninth for his 20th save in 21 opportunities. Hader had been reinstated earlier in the day after being with his family last week while his wife gave birth to their son, Lucas Alexander.

The Cardinals finished with three hits.

Brendan Donovan beat out an infield single to start the ninth but was thrown out attempting to reach second on a pitch that got away. Donovan was tagged on the heel by Brewers second baseman Luis Urías before sliding into the base.

"It's just a matter of knowing who you have behind you -- Goldy and Nolan," Marmol said of Donovan's decision. "If you're hitting seventh there and it's a one-run ballgame, be aggressive. That's something he'll learn from. He'll be fine."

Burnes needed to be on top of his game to outduel St. Louis' Miles Mikolas, who had come one strike away from a no-hitter last Tuesday before allowing a double to Cal Mitchell with two outs in the ninth inning of a 9-1 victory against the Pittsburgh Pirates.

The game was scoreless with each team having only one hit before the Brewers broke through in the bottom of the fifth.

After Keston Hiura singled with one out, Taylor hit a 2-2 sinker from Mikolas over the center-field wall. Taylor's seventh homer of the season traveled an estimated 416 feet.

Mikolas (5-5) lasted 6⅓ innings and allowed those two runs plus four hits while striking out three and walking two.

"It's kind of whoever blinks first or (you) kind of know going out that it might be a one-swing ballgame," Mikolas said. "They put a good swing on the ball, and that was it."

Notes: Cardinals OF Tyler O'Neill went on the injured list after straining his left hamstring while running the bases on a ninth-inning double Sunday in a 6-4 loss at Boston. "Something kind of grabbed on me a little bit rounding first base," O'Neill said. The Cardinals recalled OF Lars Nootbaar from Triple-A Memphis. ... St. Louis general manager Michael Girsch indicated Jordan Hicks will be preparing for a relief role during the right-hander's rehabilitation assignment. Hicks entered the season with 112 career appearances -- all in relief -- but has started in seven of his nine outings this season and is 1-4 with a 5.02 ERA. ... Ashby went on the injured list retroactive to Friday with left forearm inflammation. Ashby had been scheduled to start tonight's game. Ashby said before Monday's game he was struggling to throw his slider during his bullpen session Sunday. ... Woodruff is scheduled to make a rehabilitation appearance Thursday for the Brewers' Single-A affiliate in Appleton, Wis. Woodruff went on the injured list three weeks ago with an ankle injury but has since been dealing with Raynaud's syndrome, which causes decreased blood flow to the fingers. ... The series continues tonight as RHP Jack Flaherty (0-0, 6.00 ERA) starts for the Cardinals and RHP Chi Chi Gonzalez (0-0, 7.71) makes his Brewers debut.