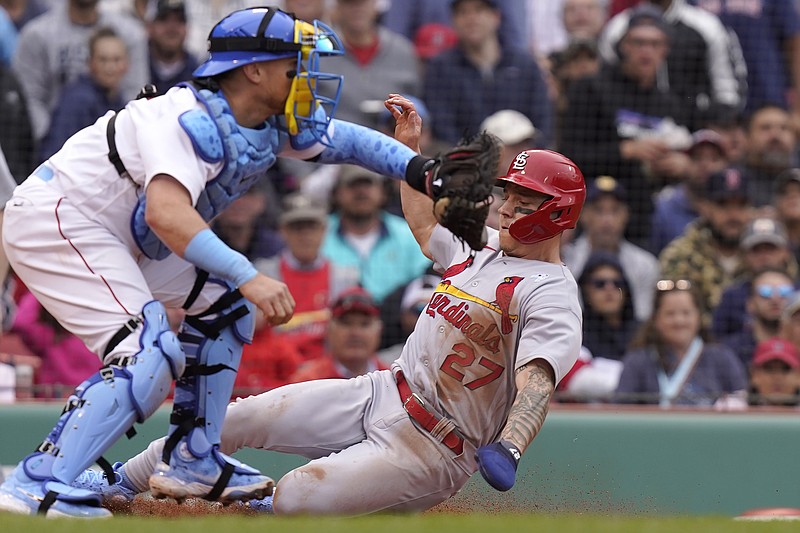 Tyler O'Neill of the Cardinals slides safely into home plate as Red Sox catcher Christian Vazquez waits for the ball in the fourth inning of Sunday afternoon's game at Fenway Park in Boston. (Associated Press)

Trevor Story added a solo shot and Jackie Bradley Jr. had a go-ahead single for the Red Sox, who rebounded after getting blown out 11-2 on Saturday night for their 13th victory in 17 games.

St. Louis wrapped up just its second visit to Fenway Park in 14 years. The Cardinals have lost three of four.

Juan Yepez had a pinch-hit three-run homer in the ninth and Tyler O'Neill had three hits for the Cardinals but had to leave the game due to left hamstring tightness after legging out a double.

"I was really happy with the way it finished," said Pivetta, who struck out the side in his final inning. "I was really focused on putting a zero up on the board. It was still a 2-1 game."

He gave up all of his walks in the first three innings.

"We had to get back to the normal Pivetta we know," said catcher Vázquez. "When he attacks the zone with the fastball no matter who's hitting, he doesn't care who's hitting. He attacks everybody."

Pivetta said he was still pumped up afterward.

Tanner Houck struck out Brendan Donovan for the final out after Yepez's homer with a runner on second for his fourth save.

Vázquez hit his shot into the Green Monster seats, making it 6-1 in the eighth.

Cardinals' slugger Albert Pujols, who announced he's retiring at the end of the season, started at DH despite a right-hander pitching and went 0-for-3 with three strikeouts.

"Pallante did a nice job," St Louis manager Oliver Marmol said. "He competed extremely well, under control the whole time, a lot of ground balls. ... Overall, a solid mix. We wanted to keep him right around 75 today. We got to that pitch count. A nice job."

Bradley broke a tie with a two-out single up-the-middle in the fifth, a grounder that slipped past the dive of shortstop Tommy Edman, scoring Alex Verdugo from second.

Story hit Pallante's fastball to the opposite field, a drive that sailed over Boston's bullpen in the second for his 10th homer.

The Cardinals tied it in the fourth when O'Neill singled leading off, stole second and scored on Harrison Bader's two-out single.

Cardinals LHP Génesis Cabrera had a gift he bought for himself hanging in his locker -- a Celtics Jayson Tatum road jersey.

Cabrera, from the Dominican, wanted to buy one of his fellow countrymen, Al Horford, but couldn't find one in the store, so he bought Tatum's instead.

Marmol's wife, Amber, and young daughter, Riley, were on the trip.

Notes: Red Sox RHP James Norwood, acquired Saturday from the Phillies for cash, was added to the roster. RHP Kutter Crawford was sent to Triple-A Worcester. ... Cardinals RHP Jack Flaherty will make his second start after returning from a right-shoulder injury Tuesday in Milwaukee with the plan to throw about 75 pitches before there's expected to be no limit after that. "We'll build up his pitch count this next time out," manager Oliver Marmol said. "He was 60 last time. We'll drive that up. ... After that, he'll be a regular big-league pitcher." ... Red Sox LHP Chris Sale (out since spring training, fracture rib cage) is expected to throw a second simulated game off the Fenway mound today. ... Red Sox OF Verdugo was in the lineup after getting Saturday off. ... Cardinals RHP Miles Mikolas (5-4, 2.62 ERA) is set to start today in the opener of a four-game series at Milwaukee. Mikolas took a no-hitter into the ninth in his last start at Pittsburgh before Cal Mitchell's ground-rule double. RHP Corbin Burnes (4-4, 2.52) is scheduled for the Brewers. ... Red Sox RHP Josh Winckowski (1-1, 4.50) is slated to start against Tigers RHP Alex Faedo (1-3, 4.28) in the first of three today at Fenway.