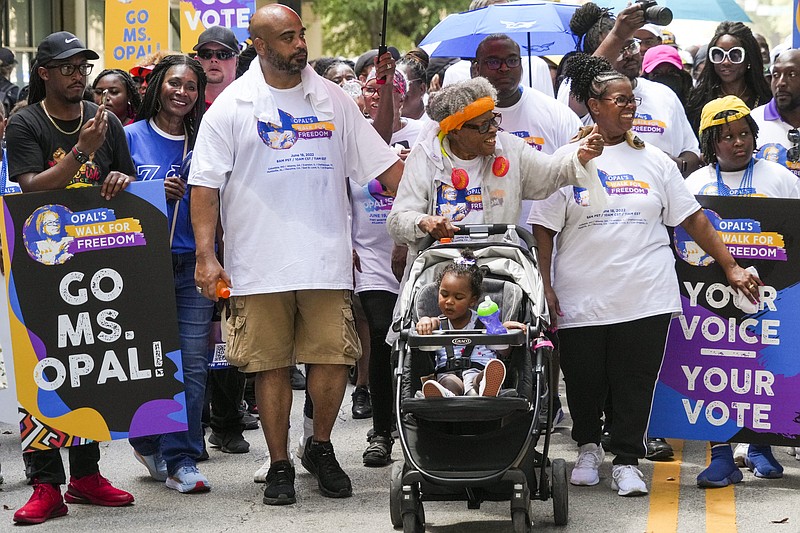 Opal Lee pushes one of her great granddaughters in a stroller as she waves to musicians playing along the route during the 2022 Opal's Walk for Freedom on Saturday, June 18, 2022, in Fort Worth. Lee, often referred to as the "Grandmother of Juneteenth" led her annual two-and-a-half-mile walk, representing the number of years after the Emancipation Proclamation before enslaved people in Texas learned they were free. (Smiley N. Pool/The Dallas Morning News via AP)

DALLAS (AP) -- After Opal Lee led hundreds in a walk through her Texas hometown to celebrate Juneteenth, the 95-year-old Black woman who helped successfully push for the holiday to get national recognition said it's important that people learn the history behind it.

"We need to know so people can heal from it and never let it happen again," said Lee, whose 2½-mile walk through Fort Worth symbolizes the 2½ years it took for enforcement in Texas of President Abraham Lincoln's Emancipation Proclamation, which ended slavery in the Southern states.

A year after President Joe Biden signed legislation making June 19 the nation's 12th federal holiday, Americans across the country gathered this weekend at events filled with music, food and fireworks. Celebrations also included an emphasis on learning about the past and addressing racial disparities. Many people celebrated the day just as they did before any formal recognition.

Juneteenth, also known as Freedom Day, commemorates the day in 1865 when Union soldiers arrived in Galveston, Texas, to order freedom for the enslaved people of the state -- two months after the Confederacy had surrendered in the Civil War.

A Gallup Poll found that Americans are more familiar with the day than they were last year, with 59 percent saying they knew "a lot" or "some" about the holiday compared with 37 percent a year ago in May. The poll also found that support for making Juneteenth part of the history taught in schools increased from 49 percent to 63 percent.

Yet many states have been slow to designate it as an official holiday. Lawmakers in Mississippi, South Carolina, Tennessee and elsewhere failed to advance proposals this year that would have closed state offices and given most of their public employees paid time off.

Celebrations in Texas included one at a Houston park created 150 years ago by a group of formerly enslaved men who bought the land. At times, it was the only public park available in the area to Blacks, according to the conservancy's website.

"They wanted a place that they could not only have their celebration, but they could do things other things during the year as a community," said Jacqueline Bostic, vice chairwoman of the board for the Emancipation Park Conservancy and the great-granddaughter of one of the park's founders, the Rev. Jack Yates.

This weekend's celebration included performances from The Isley Brothers and Kool & The Gang. In the weeks leading up to Juneteenth, the park hosted discussions on topics ranging from health care to policing in communities of color to the role of green spaces.

As more people learn about Juneteenth, "we want to harness that and use this moment as a tool to educate people about history and not just African American history but American history," said Ramon Manning, chairman of the board for the Emancipation Park Conservancy.

Those participating included Robert Stanton, the first African American to serve as director of the National Park Service, and Philonise Floyd, the brother of George Floyd, who grew up in the historically Black neighborhood where the park is located and whose killing by a Minneapolis police officer two years ago sparked protests around the globe.

In Fort Worth, celebrations included the Bill Pickett Invitational Rodeo, named for the Black cowboy who is credited with introducing bulldogging, or steer wrestling. The rodeo's president and CEO, Valeria Howard Cunningham, said children often express surprise that there are real Black cowboys and cowgirls.

Juneteenth provides an opportunity to reflect on "the different practices or norms that are contradicting the values of freedom" and consider how to challenge those things, Harris said.

Some of the largest celebrations in the U.S. not only touch on the history of slavery in America, but celebrate Black culture, businesses and food.

In Phoenix, hundreds of people gathered for an annual event at Eastlake Park, which has been a focal point for civil rights in Arizona. The recently crowned Miss Juneteenth Arizona used her platform to speak about how she felt empowered along with her fellow Black women during the state pageant, which is part of a nationwide competition that showcases and celebrates the academic and artistic achievements of Black women.

It's a "moment to build up sisterhood, it's not about competing against each other for a crown, it's about celebrating Black women's intelligence and staying true to ourselves," said Shaundrea Norman, 17, whose family is from Texas and grew up knowing about Juneteenth.

"We have to fight twice as hard to have the same freedoms that our ancestors fought for hundreds of years ago," she said. "It's important we continue to fight for my generation, and this day is important to celebrate how far we've come." 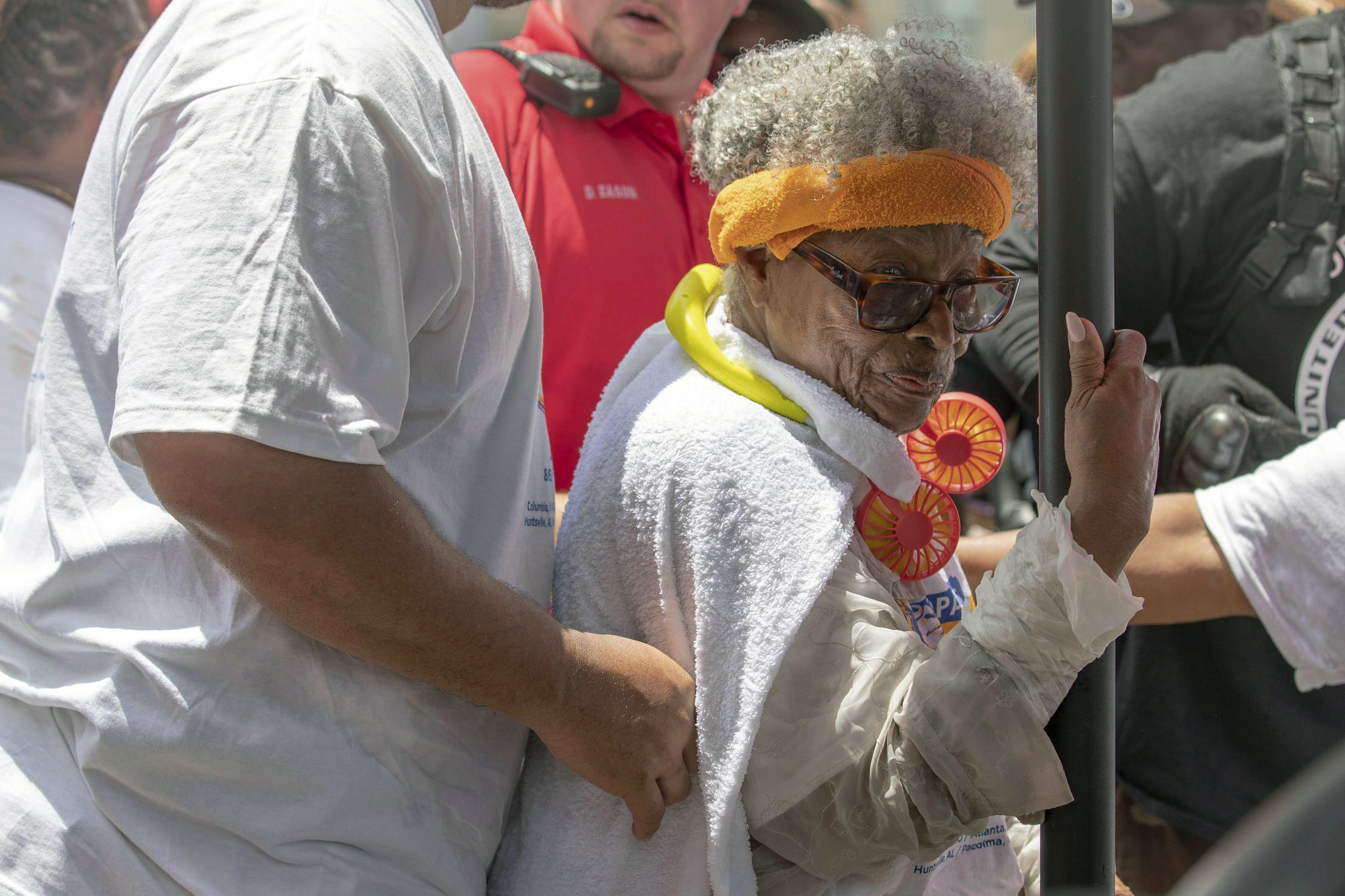 Opal Lee arrives to City Hall after walking 2.5 miles across Fort Worth, Texas to recognize Juneteenth on Saturday, June 18, 2022. With hundreds of supporters, Lee walked the 2.5 miles symbolizing the 2.5 years it took for enslaved African-Americans to be freed after the Emancipation Proclamation. (Madeleine Cook/Star-Telegram via AP)

FILE - Dancer Prescylia Mae, of Houston, performs during a dedication ceremony for the mural "Absolute Equality" in downtown Galveston, Texas, on June 19, 2021. Recognition of Juneteenth, the effective end of slavery in the U.S., gained traction after the police killing of George Floyd in 2020. But after an initial burst of action, the movement to have it recognized as an official holiday in the states has largely stalled. (Stuart Villanueva/The Galveston County Daily News via AP, File) 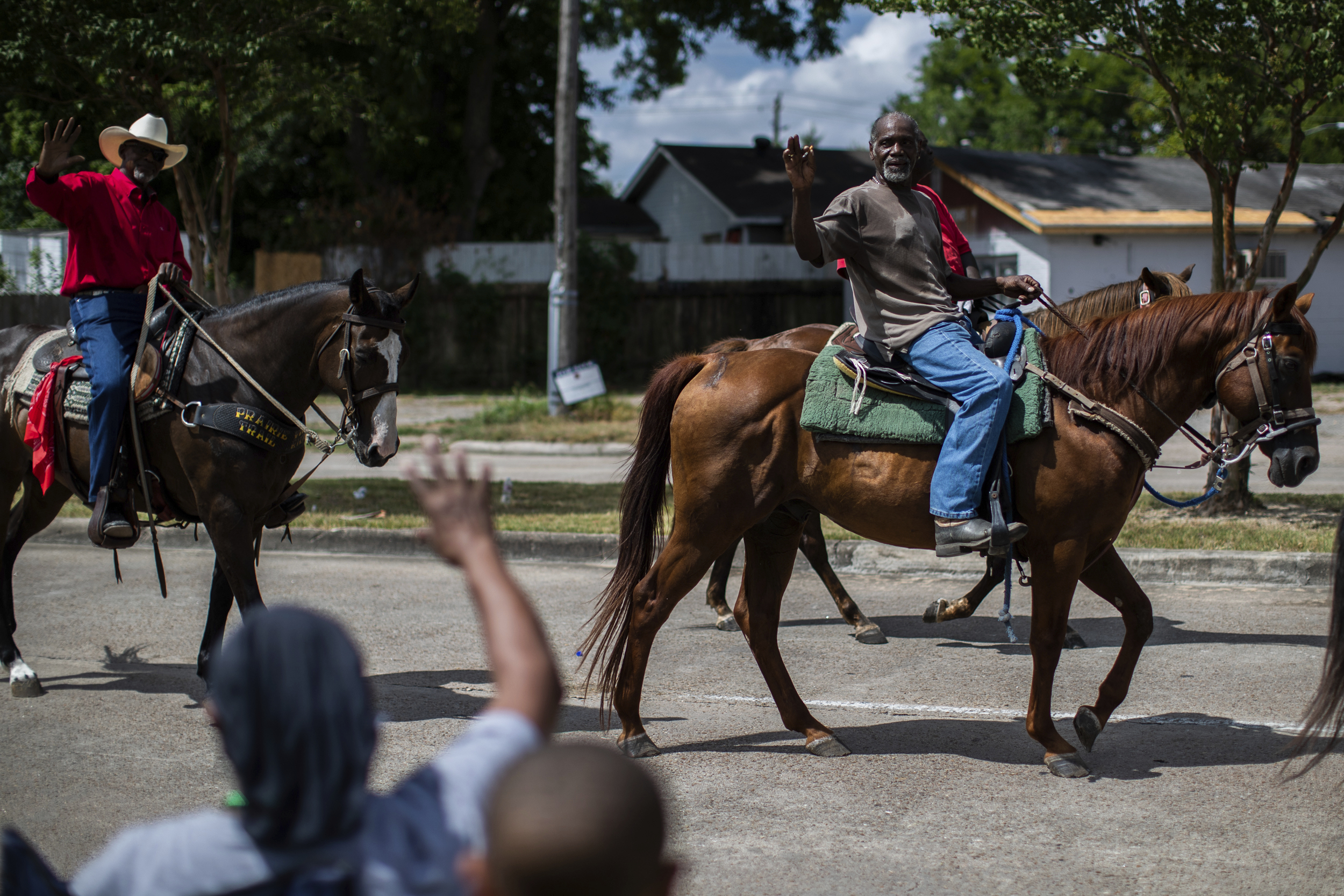 A visitor takes a photograph of the Absolute Equality Mural, which was unvailed last Juneteenth, with his cellphone, Wednesday, June 15, 2022, in Galveston, Texas. Galveston is the birthplace of Juneteenth, but has seen a steady decline in its Black population over the years. (Yi-Chin Lee/Houston Chronicle via AP)

FILE - People attend Juneteenth celebrations in the Harlem neighborhood of New York, on June 19, 2021. Recognition of Juneteenth, the effective end of slavery in the U.S., gained traction after the police killing of George Floyd in 2020. But after an initial burst of action, the movement to have it recognized as an official holiday in the states has largely stalled. (AP Photo/Eduardo Munoz Alvarez, File)

Pamela Junior, director of The Two Mississippi Museums, speaks about the historical roots of Juneteenth, as she stands before the entrance exhibits to the Mississippi Civil Rights Museum, Thursday, June 16, 2022, in Jackson. Juneteenth recognizes the day in 1865, when the Emancipation Proclamation— which had been issued on January 1, 1863— was read to enslaved African Americans in Texas. (AP Photo/Rogelio V. Solis) 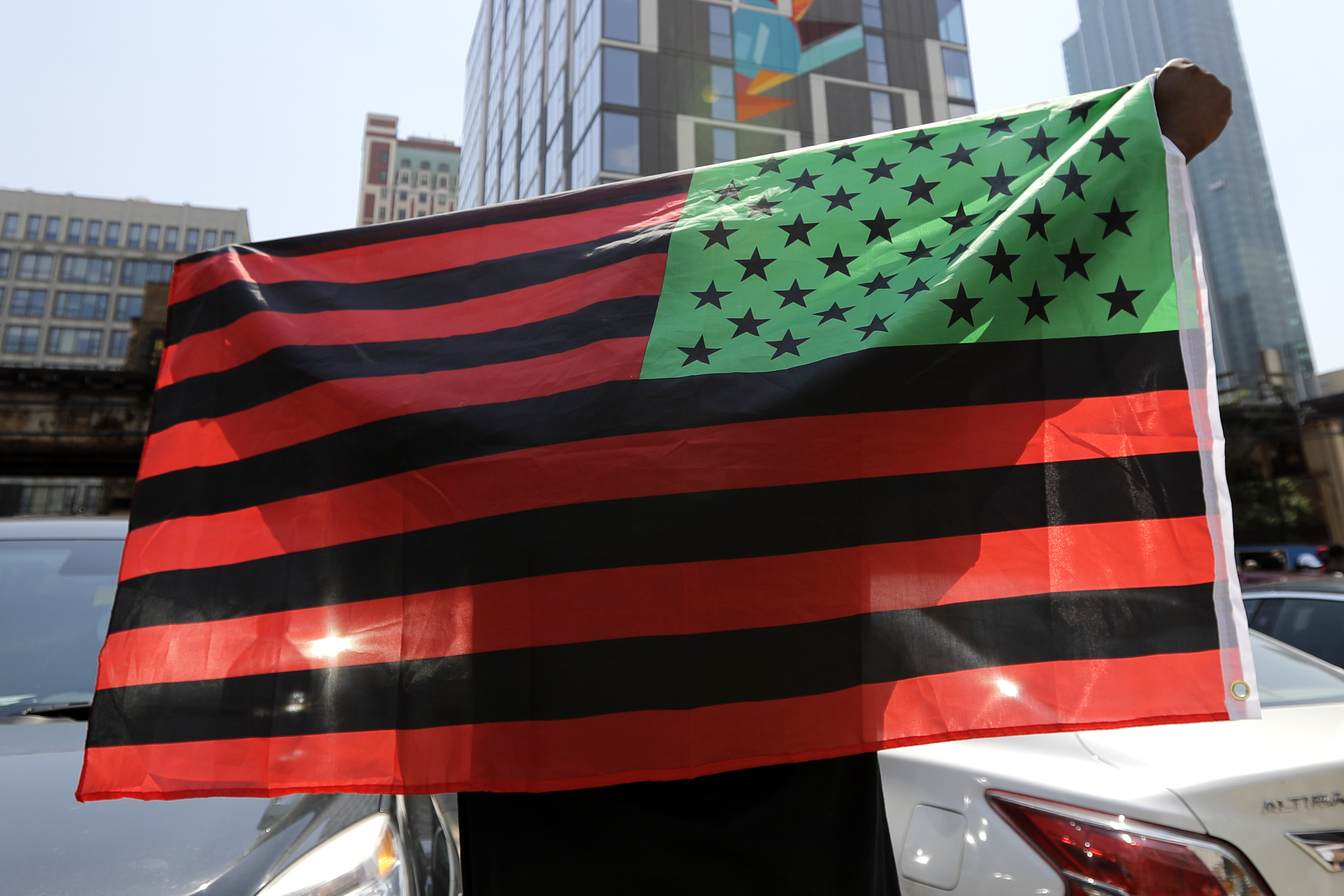 FILE - A man holds an African-American flag during a demonstration in Chicago on June 19, 2020, to mark Juneteenth, the holiday celebrating the day in 1865 that enslaved black people in Galveston, Texas, learned they had been freed from bondage, more than two years after the Emancipation Proclamation. Retailers and marketers from Walmart to Amazon have been quick to commemorate Juneteenth with an avalanche of merchandise from ice cream to T-shirts to party favors. (AP Photo/Nam Y. Huh, File)

Hundreds of people marching with activist Opal Lee wave flags and signs on Saturday, June 18, 2022, in Fort Worth, Texas. Lee was instrumental in the declaration of Juneteenth as a federal holiday. (Madeleine Cook/Star-Telegram via AP)