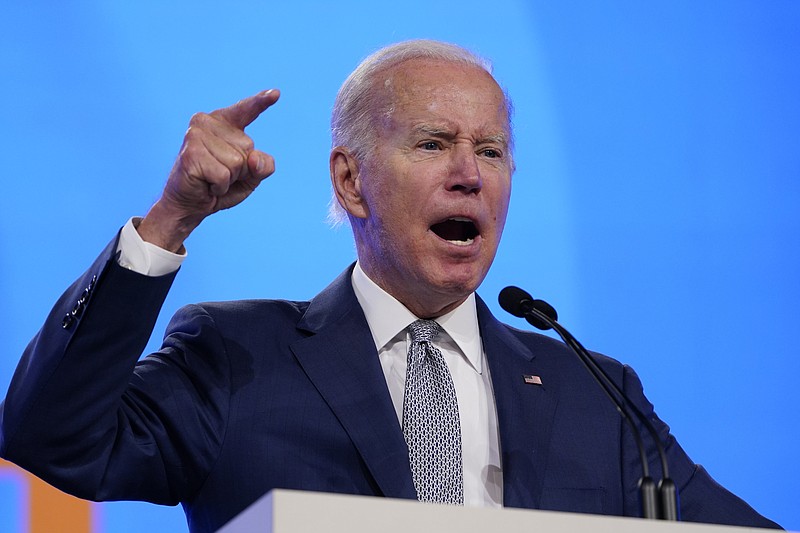 President Joe Biden on Wednesday called on U.S. oil refiners to produce more gasoline and diesel, saying their profits have tripled during a time of war between Russia and Ukraine as Americans struggle with record high prices at the pump.

"The crunch that families are facing deserves immediate action," Biden wrote in a letter to seven oil refiners. "Your companies need to work with my Administration to bring forward concrete, near-term solutions that address the crisis."

Gas prices nationwide are averaging roughly $5 a gallon, an economic burden for many Americans and a political threat for the president's fellow Democrats going into the midterm elections. Broader inflation began to rise last year as the U.S. economy recovered from the coronavirus pandemic, but it accelerated in recent months as energy and food prices climbed after Russia invaded Ukraine in February and disrupted global commodity markets.

The government reported on Friday that consumer prices had jumped 8.6 percent from a year ago, the worst increase in more than 40 years.

The letter notes gas prices were averaging $4.25 a gallon when oil was last near the current price of $120 a barrel in March. That 75-cent difference in average gas prices in a matter of just a few months reflects a shortage of refinery capacity and profits that "are currently at their highest levels ever recorded," the letter states.

The American Petroleum Institute, which represents the industry, said in a statement capacity has been diminished as the Biden administration has sought to move away from fossil fuels as part of its climate change agenda.

"While we appreciate the opportunity to open increased dialogue with the White House, the administration's misguided policy agenda shifting away from domestic oil and natural gas has compounded inflationary pressures and added headwinds to companies' daily efforts to meet growing energy needs while reducing emissions," API CEO Mike Sommers said in a statement.

Sommers added, "I reinforced in a letter to President Biden and his Cabinet yesterday ten meaningful policy actions to ultimately alleviate pain at the pump and strengthen national security, including approving critical energy infrastructure, increasing access to capital, holding energy lease sales, among other urgent priorities."

The letter is unlikely to start a chain of events that would boost supplies. Refineries have gone through unprecedented, unplanned maintenance globally in the last three months and there is an extreme shortage being felt across the globe, said Claudio Galimberti, senior vice president at Rystad Energy. China's decision to limit its exports of oil products also contributed to the problem, he said.

"U.S. refiners cannot increase capacity beyond current levels," Galimberti said. "If they could, they would have done it already."

As Biden sees it, refineries are capitalizing on the uncertainties caused by "a time of war." His message that corporate greed is contributing to higher prices has been controversial among many economists, yet the claim may have some resonance with voters.

Some liberal lawmakers have proposed cracking down on corporate profits amid the higher inflation. Sen. Bernie Sanders, a Vermont independent, in March proposed a 95 percent tax on profits in excess of companies' pre-pandemic averages.

The president has harshly criticized what he views as profiteering amid a global crisis that could potentially push Europe and other parts of the world into a recession, saying after a speech Friday that ExxonMobil "made more money than God this year." ExxonMobil responded by saying it has already informed the administration of its planned investments to increase oil production and refining capacity.

"There is no question that (Russian President) Vladimir Putin is principally responsible for the intense financial pain the American people and their families are bearing," Biden's letter says. "But amid a war that has raised gasoline prices more than $1.70 per gallon, historically high refinery profit margins are worsening that pain."

The letter says the administration is ready to "use all reasonable and appropriate Federal Government tools and emergency authorities to increase refinery capacity and output in the near term, and to ensure that every region of this country is appropriately supplied." It notes that Biden has already released oil from the U.S. strategic reserve and increased ethanol blending standards, though neither action put a lasting downward pressure on prices.

There's little the government can do to lower prices, other than release oil from the strategic reserve, and that's already been done, said Jim Burkhard, vice president at IHS Markit. If Biden had not done that, prices would be even higher today, he added.

"No government can simply conjure up new supply," Burkhard said. "One thing that may help would be to have a more constructive relationship with the U.S. oil industry, because it's been somewhat antagonistic so far."

He also has directed Energy Secretary Jennifer Granholm to convene an emergency meeting and consult with the National Petroleum Council, a federal advisory group that is drawn from the energy sector.

Biden is asking each company to explain to Granholm any drop in refining capacity since 2020, when the pandemic began. He also wants the companies to provide "any concrete ideas that would address the immediate inventory, price, and refining capacity issues in the coming months -- including transportation measures to get refined product to market."

There may be limits on how much more capacity can be added. The U.S. Energy Information Administration on Friday released estimates that "refinery utilization will reach a monthly average level of 96 percent twice this summer, near the upper limits of what refiners can consistently maintain."