The battle of Donbas could prove decisive in Ukraine war 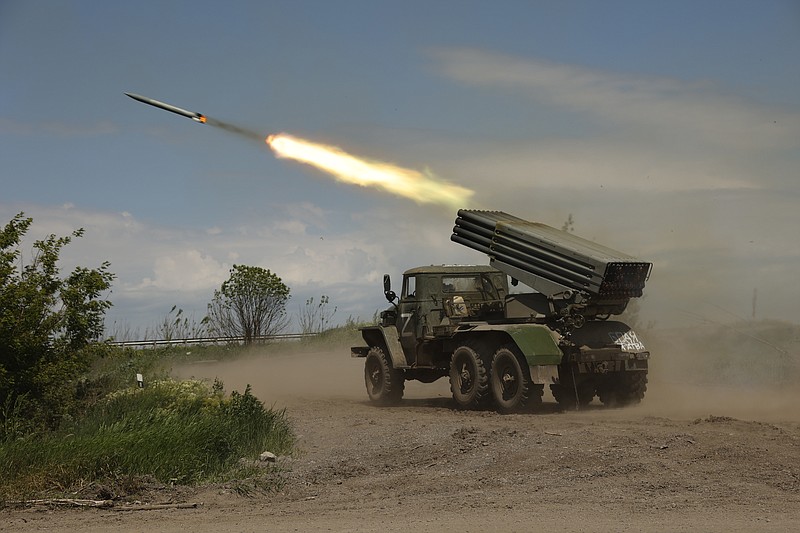 A Donetsk People's Republic militia's multiple rocket launcher fires from its position not far from Panteleimonivka, in territory under the government of the Donetsk People's Republic, eastern Ukraine, Saturday, May 28, 2022. Day after day, Russia is pounding the Donbas region of Ukraine with relentless artillery and air raids, making slow but steady progress to seize the industrial heartland of its neighbor. With the conflict now in its fourth month, it’s a high-stakes campaign that could dictate the course of the entire war. (AP Photo/Alexei Alexandrov, file)

Day after day, Russia is pounding the Donbas region of Ukraine with relentless artillery and air raids, making slow but steady progress to seize the industrial heartland of its neighbor.

With the conflict now in its fourth month, it's a high-stakes campaign that could dictate the course of the entire war.

If Russia prevails in the battle of Donbas, it will mean that Ukraine loses not only land but perhaps the bulk of its most capable military forces, opening the way for Moscow to grab more territory and dictate its terms to Kyiv. A Russian failure could lay the grounds for a Ukrainian counteroffensive -- and possibly lead to political upheaval for the Kremlin.

Following botched early attempts in the invasion to capture Kyiv and the second-largest city of Kharkiv without proper planning and coordination, Russia turned its attention to the Donbas, a region of mines and factories where Moscow-backed separatists have been fighting Ukrainian forces since 2014.

Learning from its earlier missteps, Russia is treading more carefully there, relying on longer-range bombardments to soften Ukrainian defenses.

It seems to be working: The better-equipped Russian forces have made gains in both the Luhansk and Donetsk regions that make up the Donbas, controlling over 95% of the former and about half of the latter.

Ukraine is losing between 100 and 200 soldiers a day, presidential adviser Mykhailo Podolyak told the BBC, as Russia has "thrown pretty much everything non-nuclear at the front."

When the war was going badly for Russia, many thought President Vladimir Putin might claim victory after some gains in Donbas and then exit a conflict that has seriously bruised the economy and stretched its resources. But the Kremlin has made clear it expects Ukraine to recognize all the gains Russia has made -- including its 2014 annexation of the Crimean Peninsula -- something Kyiv has ruled out.

Russian forces control the entire Sea of Azov coast, including the strategic port of Mariupol, the entire Kherson region -- a key gateway to Crimea -- and a large chunk of the Zaporizhzhia region that could aid a further push deeper into Ukraine. Few expect that Putin will stop.

Western officials still praise the ability of Ukrainian forces to defend their country, fighting back fiercely, relying on artillery and retreating in some sections while launching frequent counterattacks.

Russia has a clear edge in artillery in the battle for Donbas, thanks to a bigger number of heavy howitzers and rocket launchers and abundant ammunition. The Ukrainians have had to be economical in using their artillery, with the Russians constantly targeting their supply lines.

Ukraine has begun to receive more heavy weapons from Western allies, who have provided dozens of howitzers and are now planning to start delivering multiple rocket launchers.

Moscow's earlier territorial gains in the south, including the Kherson region and a large part of the neighboring Zaporizhzhia region, have prompted Russian officials and their local appointees to move toward folding those areas into Russia or declaring them to be independent, like the so-called "people's republics" of Donetsk and Luhansk.

Ukrainian officials and Western analysts voiced concern that Moscow could try to press its offensive into the heavily populated and industrialized Dnipro region farther north, an advance that could potentially slice Ukraine in two and raise a new threat for Kyiv.

A top Russian general already has spoken of plans to cut off Ukraine from the Black Sea by seizing the Mykolaiv and Odesa regions all the way to the border with Romania, a move that would also allow Moscow to build a land corridor to Moldova's separatist region of Transnistria that hosts a Russian military base.

Such ambitions all hinge on Moscow's success in the east. A defeat in the Donbas would put Kyiv in a precarious position, with new recruits lacking the skills of battle-hardened soldiers now fighting in the east and supplies of Western weapons insufficient to fend off a potentially deeper Russian push.

Ukrainian officials brushed off such fears, voicing confidence that its military can hold out to stem the Russian advances and even launch a counterattack.

"Ukraine's plan is clear: Kyiv is wearing the Russian army out, trying to win time for more deliveries of Western weapons, including air defense systems, in the hope of launching an efficient counteroffensive," said analyst Mykola Sunhurovsky of the Razumkov Center, a Kyiv-based think tank.

Print Headline: The battle of Donbas could prove decisive in Ukraine war