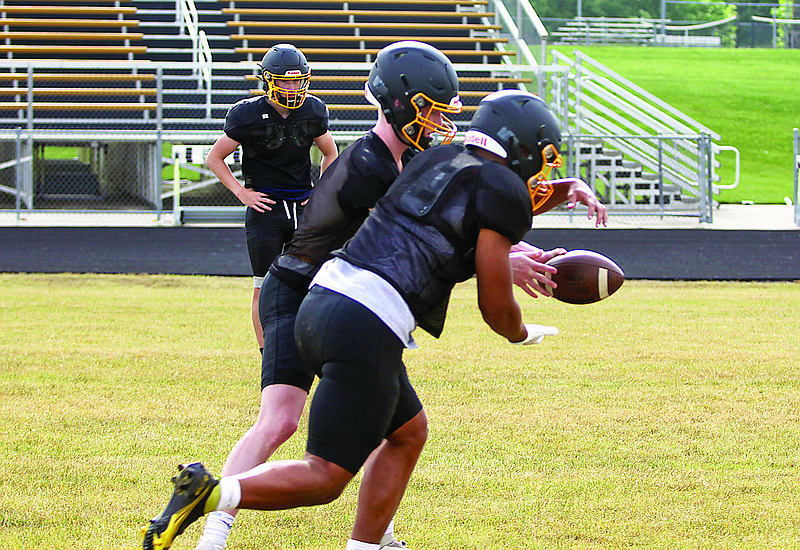 According to Hornets coach Dana Chambers, the team is focusing on the fundamentals during the summer period.

“We got to work on our technique,” Chambers said. “You got to get real good at doing what we’re doing and just build on that every day. So we start with — every day — with our individual drills. The guys work through the techniques of our scheme, and then we add on and build on.”

For the first hour of Wednesday’s two-hour practice, the team split into three different groups — quarterbacks and running backs with linebackers and defensive backs, wide receivers and offensive/defensive lineman.

The quarterbacks and running backs would run a pass or run play and come up against a few defenders. Each play would be a run through of an in-game play, but without any offensive or defensive linemen.

For the wide receivers, Fulton receivers coach Matthew Greble tossed tennis balls to receivers as they ran routes around cones after catching the ball.

Off to the side of Robert E. Fisher Jr. Stadium, in a grassy area, the Hornets linemen ran drills on block shedding equipment.

Chambers started the practice observing the two groups on the football field for the first 30 minutes, then drove a golf cart to where the lineman were practicing.

After the first hour, Chambers drove a player to band practice, which took place in Fulton’s parking lot.

Heading back to the field, Chambers had the players take a water break.

After the water break, 27 of the Hornets’ 30 man squad gathered to conduct live plays, with 11 players on offense and defense. Following each play, Chambers swapped out some players to give others more reps.

For the final hour, the team continued running plays, with water breaks scattered in between.

Following the final day of summer camp Friday, Fulton will travel to Warrensburg today for an all-day camp at Central Missouri. The team will take a break before its final week of summer camp, which takes place July 11-15.

The Hornets begin fall practice Aug. 8, then play in the Hermann Jamboree Aug. 19.

Fulton’s first game will be on the road against Eldon on Aug. 26.