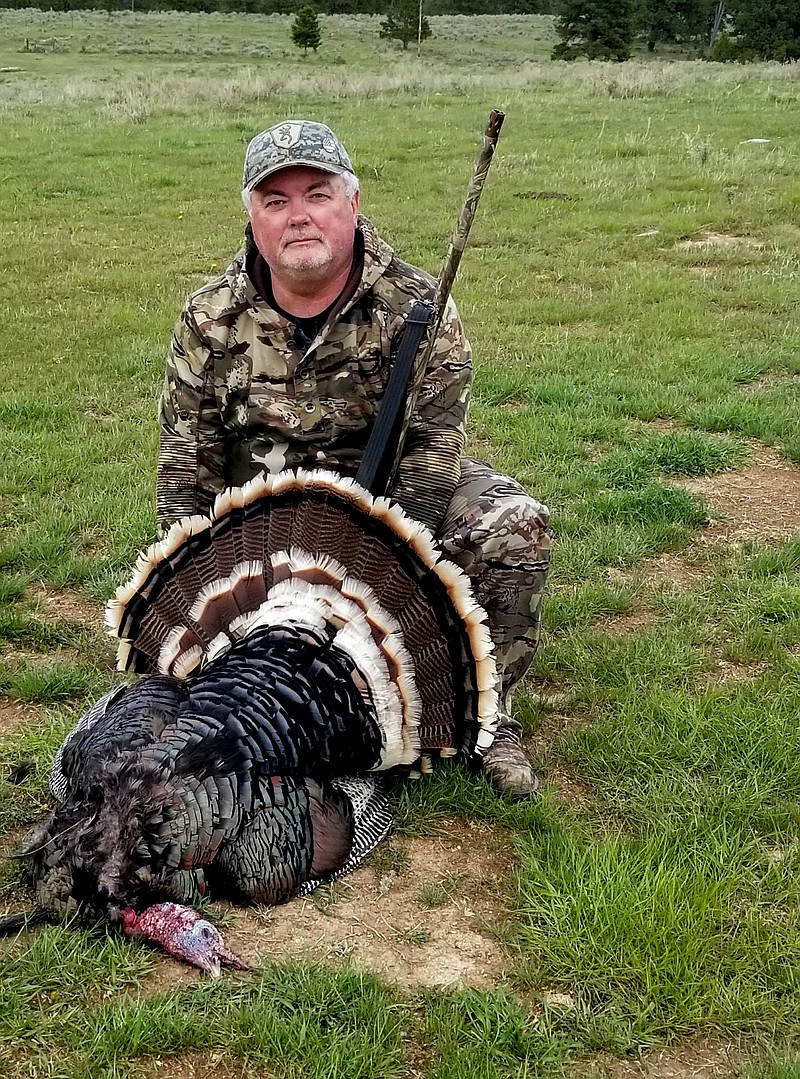 You wonder how a man who has had a successful hunting career almost his entire life could feel such excitement over a turkey hunt.

Randy Kleindienst, our middle son, has not only been a skilled hunter, but has practiced safe and courteous hunting rules since he was a young boy. He still gets just as excited over bagging his game now as he did at the age of 6, when he came in with his first squirrel. And then when he got his first turkey 50 years ago.

Randy was in the Fulton newspaper that year with his first turkey, which he bagged at the age of 9 years old. He was congratulated by Conservation Agent Clyde Wilson, who said he had no recollection of a turkey being bagged by a smaller lad in Callaway County. Therefore, giving Randy the title of the youngest successful hunter in our county. His year older brother Daniel, also got his turkey, as did their dad, David.

The boys seem to be following their dad David's record for being the first. David was one of the first to get his turkey when the first turkey season opened in Callaway County. I used to wonder how my husband David, his friends, his uncles, and our sons, could sit and tell their turkey stories dating back for years -- in detail. Then I started hunting with David, and it is so funny how I then understood and could take part. I can tell you details of every hunt. How can you not remember things like this?

You hear a big old gobbler in the distance and you head out huffing and puffing, walking as fast as you can, up and down the hills, through brush. You are trying to get as close as you can without Mr. Biggie knowing it. You can tell he is a big old bird by his deep tone as he gobbles. You struggle not to cough as you find a hiding place. There it is, a big old log, perfect for hiding behind.

Meanwhile David was making calls with his trusty old turkey call that helps him bag his turkey every year. It is covered with notches for turkeys, like a gunfighter makes his notches.

He calls and Mr. Turkey gobbles. He is getting closer. You seem to hear your heart pounding. Oh wait, maybe that sound is the thump, thump, drumming sound the turkey makes. Yes, you realize it is the turkey. You strain your ears and bug your eyes and stare looking for movement. You see a movement and every sense you have is alert. Oh, it's only a squirrel.

Well, this day we played the cat and mouse game with that turkey for a long time. We knew he was right there, but we could not see him. When we got back to our truck, there were other hunters gathered there visiting and they all knew about this turkey. They all agreed that he had already been educated.

Since our son, Randy, has gotten his turkey here each season, he had a desire to go try his skills on some other kind of turkey, other than the Eastern species we have here. Last year was his first time out of Missouri to hunt turkeys. He took a trip to Norton, Kansas, to hunt a Rio turkey. Like always, he was successful.

He decided he wanted to go this year and try for a Merriam turkey; They are beautiful birds with colorful detail and the white in their tails makes them a real showy turkey. He made plans and booked this hunt a year in advance. He and his daughter's boyfriend, Jake, would be traveling to Hulett, Wyoming, for their first time to turkey hunt in the area.

The ranch where they would be hunting was over 8,000 acres. He described it as some of the most breathtaking scenery with a large amount of wildlife. Deer, elk and turkeys, all with beautiful pine forest background scenery.

Randy told of his first evening there and how they had seen evidence of mountain lions in the area. They had been advised of this earlier but now they knew. He laughed and said that's when he began to spend as much time looking up in the trees as on the ground. He was carrying his .44 Magnum, just in case.

He said although the Wyoming black hills are rugged, he and Jake walked 10 miles the first day. He laughed as he said, "That's pretty hard on a nearly 60-year-old man."

The first afternoon after setting up in a likely roost area, he said: "Then I was blessed to call in a mature gobbler. It was in full strut and one of the most beautiful turkeys I have ever seen. Those white tipped feathers and surrounded in the incredible beauty of the area, was awesome.

"I was able to make a good ethical one-shot kill and my hunt came to a wonderful conclusion. I was able to get the Devils Tower (our first National Monument) in some of the pictures."

He told us how the weather went from snow, rain, sunshine, or rain on different sides of the tower. Isn't that strange?

"And, if you don't mind walking a great distance, it's a great place to hunt in a beautiful location and I highly recommend it," he said.

When asked, like we do a lot, if we are a relative of Randy Kleindienst, we wonder what they know him as: the singer, the hunter, the commissioner, from church, sports, etc... He excels at many things.

Recently, our youngest son, Eric, who works for FedEx, met a man who seemed to perhaps know him. After meeting the man several times, Eric asked him if they had met somewhere before, or if he know the eastern commissioner in Callaway County?

The man said he knew Randy Kleindienst. Eric told him that was his brother.

"I know him from bowling," he said.

Then the man told Eric about how he and his wife had taken a trip and had stopped at a little place in Nashville to eat where they had music.

You know how that goes. Someone always asks where people are from. The man told them he was from Columbia. The person who asked said, "Oh. I thought maybe from Fulton, and he said he knew someone in Nashville in the music business from Fulton, Daniel Kleindienst."

Eric informed told that person Daniel was his older brother. It seems our boys make good names wherever they go. It proves it's a small world after all, so show respect wherever you go.

David and I are happy our son got to experience this incredible trip doing what he loves to do. He described it as a dream trip, and has many great stories to tell. We are so glad his wife Christine agrees as well with him doing it.