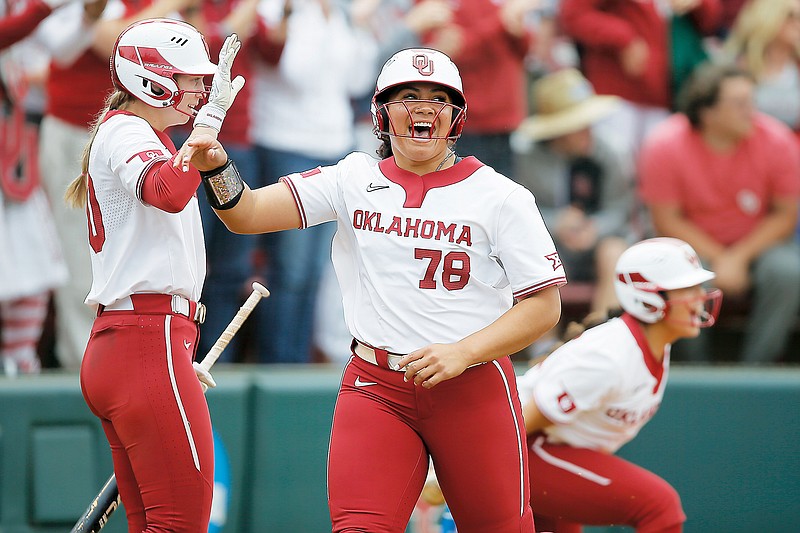 In this May 22 file photo, Oklahoma’s Jocelyn Alo celebrates with Jana Johns after scoring a run against Texas A&M during the NCAA Norman Regional in Norman, Okla. (Associated Press)

OKLAHOMA CITY -- Many of the top seeds and familiar teams will be absent when the Women’s College World Series starts today.

Oklahoma coach Patty Gasso believes those are good reasons for her top-seeded, defending national champion Sooners to be concerned heading into their opener against No. 9 seed Northwestern.

Florida State, Virginia Tech, Arkansas and Alabama are top six seeds that didn’t make it to Oklahoma City. Gasso said that means there are more teams left that overcame the odds on the road to qualify.

Northwestern, for example, rallied from a 5-0 deficit in its deciding Super Regional game to knock off Pac-12 champion Arizona State on the road and punch its ticket.

“It’s that kind of fresh, free ‘let’s go for it, we got nothing to lose’ mentality,” Gasso said. “That’s what you are seeing around the country right now, which makes for a pretty exciting World Series because any of these teams can win this. It’s not just two or three.”

It’s been a strange year, indeed. Florida is the only representative from the Southeastern Conference — a league that had sent at least two teams in each of the past 13 tournaments, including five in 2015 and four in 2016.

But parity is a real thing. Even with two-time USA Softball Collegiate Player of the Year Jocelyn Alo and a team that leads the nation in batting average, scoring and earned run average, Gasso doesn’t expect an easy run. Oklahoma’s two biggest rivals -- Big 12 opponents Texas and Oklahoma State -- qualified. Those two teams are responsible for the Sooners’ only two losses this season.

“Those teams that got here are still on a crazy roll,” Gasso said. “They haven’t been home for weeks, but they don’t care because they’re in this beautiful bubble right now that they don’t want to get burst with.”

Texas will face No. 5 seed UCLA and No. 7 Oklahoma State will play Arizona. No. 14 Florida will play Oregon State in the other matchup today. The World Series starts with a double-elimination tournament and concludes with a best-of-three championship series that will begin June 8.

The Pac-12 got three teams in -- just not the ones that might have been expected. UCLA had its usual dominant year on its way to getting into the field. But Oregon State went 9-15 in conference play and broke through.

Traditional power Arizona tied for last place in league play at 8-16, yet still found its way into the field in coach Caitlin Lowe’s first year stepping in for the retired Mike Candrea.

“They finished last in their conference, but they’re Arizona,” Gasso said. “They’ll always be Arizona.”

Alo repeated as USA Softball Collegiate Player of the Year, becoming just the fifth player to win the award in consecutive seasons. Alo has the career Division I record with 117 home runs. She has 29 homers this season and ranks second nationally with a .497 batting average.

Oklahoma pitcher Jordy Bahl, the NFCA Division I Freshman of the Year, will return to the circle after an arm injury slowed her late in the season. The Papillion, Nebraska, native hasn’t pitched since the Sooners’ regular-season finale May 7.

“You’re going to see her pitch this week,” Gasso said. “How much? We’re still working.”

UCLA pitcher Megan Faraimo is back after missing the World Series last year with a hand injury. She was a first-team All-American last season and a finalist for USA Softball Collegiate Player of the Year. This season, she went 22-4 with a 1.70 ERA and 278 strikeouts in 181⅔ innings.

“I think it does feel a little more special,” she said. “I have always been hungry to get here, but not being able to be with my team last year, I just feel very blessed and honored to be here now.”

Oregon State had a 10-game losing skid from mid-April to May 1 and didn’t look anything like a World Series team.

But seven of the losses were by one run. Since then, the Beavers have gone 8-2.

“Sometimes you learn more from the losses than you do the wins,” Oregon State coach Laura Berg said. “Just a few things that go our way, we win those games.”

Oklahoma State’s Miranda Elish and Arizona’s Madi Elish will be on opposing teams in the opener today.