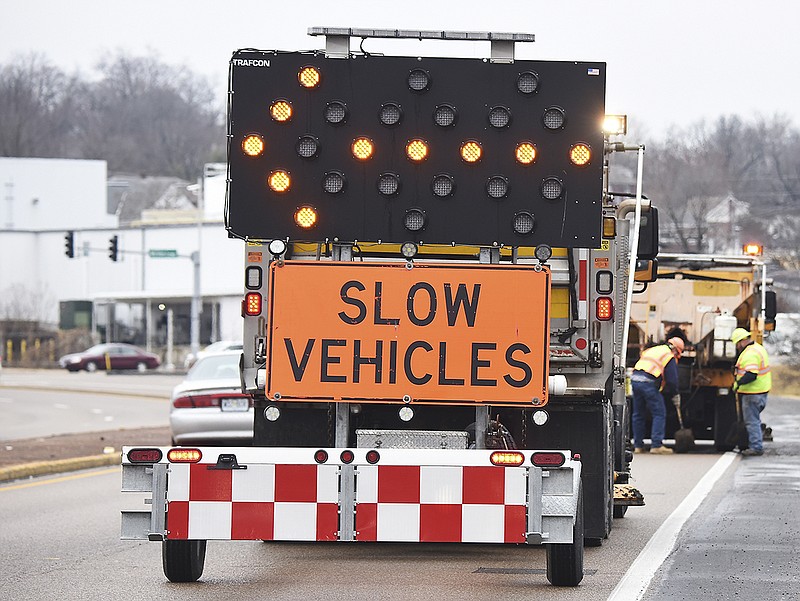 In this Feb. 22, 2018 photo, MoDOT employees are eastbound on U.S. 50 in Jefferson City, stopping to fill potholes that, due to rain and freezing temperatures, cropped up in large numbers. (News Tribune photo)

Despite a historic increase in revenue, Missouri has only enough money to maintain its transportation infrastructure while making modest, or desperately needed, improvements.

The Missouri Department of Transportation last week released a draft five-year spending plan for road and bridge projects. The Statewide Transportation Improvement Program, or STIP, proposes spending about $7.6 billion from fiscal 2023 through fiscal 2027.

The public is invited to weigh in on the plan before it's considered by the Highways and Transportation Commission in early July.

MoDOT's five-year plan factors in recent revenue increases from the state gas tax and a big bump in federal money.

Congress authorizes transportation funding every five years. In the fall of 2021, the Bipartisan Infrastructure Bill increased the amount of money Missouri will get.

"It's almost like saying:"This is your salary,'" MoDOT spokesperson Linda Wilson Horn said. "Then this past year it included a raise."

Also, in 2021 the Missouri Legislature agreed to increase the state's motor fuel tax 2.5 cents a year for five years. That marked the first gas tax increase for Missouri since 1996. The higher fuel tax and new federal money increase MoDOT's budget by 50 percent.

Finally, the state Legislature, at Gov. Mike Parson's request, budgeted $100 million for Missouri's rural roads. If the governor approves the spending plan, the money would mark a third swell in funding MoDOT was without last year.

"We want to make sure that we capitalize on that by ensuring the No. 1 priority of Missourians is met. And that is taking care of what we have first, and then where it's appropriate, and where we have resources, to expand the system," Curtit said.

The document goes on to say "while $7.65 billion of available funding represents a significant investment, many regions will only have adequate funding to maintain current pavement and bridge conditions."

Inflation, plus years of insufficient funding, caused the situation.

Curtit said this push and pull between transportation demands and available funding is nothing new. He noted a MoDOT memo from the 1960s expressed the same concern.

"This is something that will always be and always has been in transportation," Curtit said. "Needs always will far exceed resources."

Steve Hobbs is the executive director of the Missouri Association of Counties and a former Audrain County commissioner. He called the plan aggressive and said he's glad MoDOT finally will be able to address places where maintenance has been lacking.

Although MoDOT is forced to be selective with what projects to fund, Hobbs said the department works closely with local officials when making tough choices.

"They really do value that input from the counties on what projects are needed in their community," Hobbs said. "We feel like we're a major stakeholder in this process. We're really excited about the opportunity to actually get some projects -- that have been needed to be done for 15, 20 years -- we might actually have the wherewithal now to get some of those needed projects done."

The five-year plan targets improvements that have been long sought. MoDOT proposes committing $140 million to update the interchange where Interstate 70 and U.S. 63 meet in Columbia, for example.

"I think it's outlived its capacity," Edington said.

Curtit said Missourians have complained about that intersection, along with other problem spots in the state. The new funding allows MoDOT to finally tackle those projects.

"Now we can do a little bit more and still hit our goals on asset management for pavements and bridges and expand the system in those spots that Missourians really have voiced concerns and we can really see the need to improve the functionality of the system," Curtit said.

Audrain County Presiding Commissioner Alan Winders is part of the Highway 54 Coalition, which has been advocating for the expansion of the northern roadway for almost 20 years.

"We see the project as important not only locally because it improves transportation right here in this part of Missouri for these couple of counties, but we think it's important statewide," Winders said.

The coalition includes public officials and leaders from counties and cities along the stretch of highway between Mexico and Louisiana, Missouri. The group would like to see the two-lane sections of the corridor widened to improve safety and overall travel conditions.

The Highway 54 Coalition got together as development along the roadway began to increase. Winders said they realized the highway needed work to support further economic development.

"We just need better transportation," he said. "We need better access to the four-lane system."

Now, due to the influx of transportation funding, MoDOT can address the coalition's request. Highway 54 expansion is listed in the scoping and design section of the state's plan, which means engineers will study the road and plan for potential updates.

A large goal of the program is to maintain existing pavement and bridge conditions. Curtit said this strategy is important so conditions don't become even more costly to fix.

"Asset management, the system that we use, is to keep good good," Curtit said. "Because the cost of keeping good good is much less than letting things fail, and then coming back and rehabbing and reconstructing."

Hobbs, of the Missouri Association of Counties, applauds the effort to make maintenance a priority and compares it to how people care for their own belongings.

"If you don't change the oil in your car, it may run for a long time, but it's gonna fail eventually," Hobbs said.

MoDOT Assistant Chief Engineer Eric Schroeter said the department plans to give approximately $7 billion to Missouri-based contractors to tackle road maintenance and new construction. He said Missouri has the seventh-largest highway system in the nation.

"We simply have been using all of our dollars just to simply take care of the system we have," Schroeter said.

The state transportation department notes a disparity in the quality of low-volume routes across Missouri. The new improvement proposal indicates minor routes in the worst condition will be prioritized for upgrades.

The MoDOT plan directs $130 million toward minor and low-volume routes that carry fewer than 400 vehicles a day and account for more than 11,000 miles of Missouri's state roads. Lettered routes, or farm-to-market roads, are often low-volume routes in rural areas.

Hobbs said increased truck traffic, along with deferred maintenance on lettered routes in northern Missouri, has left them in bad shape.

"They (MoDOT) have fallen behind north of I-70 on lettered routes, those farm-to-market roads, and they're at risk of losing some of those right now," Hobbs said. "Truck traffic is just increased in size and weight, and they haven't been re-decked in 20 years."

Curtit said MoDOT rates the quality of a road's pavement. The department hopes to bring 70 percent of state-maintained, low-volume routes up to "good" condition in the next two to three years.

Missouri Farm Bureau President Garrett Hawkins said lettered routes are not only essential to get agricultural products to market but also to get people from town to home and children to and from school in rural Missouri. The declining quality of farm-to-market routes worries Farm Bureau members statewide.

"It's not just the potholes or the uneven surface. It's those crumbling shoulders that have been consistently what we have heard about the most," Hawkins said.

Hawkins operates a family livestock farm in Appleton City, about 90 minutes south of Kansas City. He said rough roads worry him when he transports cattle.

"Some of these back roads very much force me to drive white knuckled in the sense that I have to make sure that I'm staying focused, because a tire slipping off of a crumbling shoulder could be a very, very dangerous situation," Hawkins said.

Missouri is the second leading state in hay production, and it produces large amounts of soybeans, corn, beef and swine. The agriculture industry depends on reliable infrastructure to get those products to consumers.

Through his role at the counties association, Hobbs said he sees how the diversity of Missouri leads to a variety of transportation needs.

"You may have an urban county like St. Louis County that is dealing with a lot of paved roads, or you might have a county in north Missouri that doesn't have any paved roads at all," Hobbs said.

Hobbs, however, said there is one infrastructure obstacle that unites counties. "What they do all have in common is they have bridges."

Hobbs called bridges the "big-ticket items" for counties because most are not in a financial position to fund bridge replacements and upgrades themselves.

Dennis Bowers, supervisor of the Henry County Road and Bridge Department, said bridge replacement is its highest priority. With MoDOT's help, 11 bridges in his area will be replaced beginning in the next few weeks.

"That way the farmers can get their crops across those (currently) weight-restricted bridges without any problems," Bowers said.

MoDOT is seeking public comment on the infrastructure plan through June 17. Missourians can submit feedback online, by calling 1-888-275-6636 or by emailing [email protected]

Curtit said this is a part of the department's bottom up decision-making process.

"Missourians around the state have an opportunity ... to have a say in decisions being made prior to them being made," Curtit said.

"We're really excited to get to work out there and make improvements for people in Missouri. We know there's gonna be some inconvenience while we do that," he said. "It's hard to fix the system while everybody's on it."

"But that's what we're really excited about, is being able to turn this funding around into improvements for Missouri."

The work of the Missouri News Network is written by Missouri School of Journalism students and editors for publication by Missouri Press Association member newspapers.