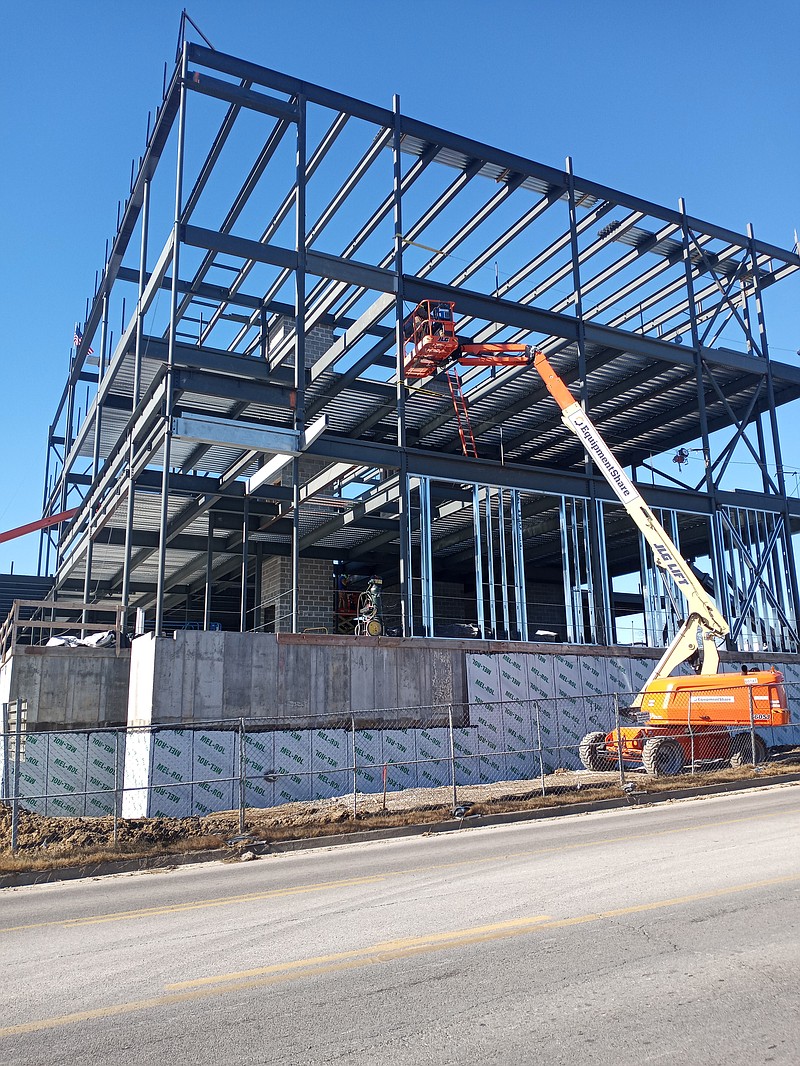 Construction on the new Justice Center in downtown Fulton got started in July and is expected to finish by the end of the year. (Photo by Michael Shine/Fulton Sun)

The Callaway County Courthouse and jail aren’t big enough to meet the area’s needs. However, two construction projects finishing this year will change that.

Last year the county broke ground on a new justice center downtown and a new jail off Route O. Presiding Commissioner Gary Jungermann said the projects will fix space issues and allow for upgraded technology at both locations.

In 2019, county voters approved a $30 million bond issue. Jungermann said that’s about what the county will spend on these two projects.

Little Dixie Construction out of Columbia is working on both projects.

The Callaway County Jail, at 1201 Route O in Fulton, can hold approximately 90-100 inmates at a time.

While it isn’t at capacity all the time, Jungermann said, it is frequently enough to be a concern.

However, the new jail can house up to 152 inmates, including two cells dedicated to people who need to be separated from others due to medical reasons.

While COVID-19 is the main disease people are concerned about right now, officials could also use the cells for inmates with the flu or other infections spread through the air.

Work on the jail started in March and Jungermann said it will probably be finished this summer.

Jungermann said the space is only one benefit of the project. It will also bring the Callaway County Jail up to modern standards.

The county built the current jail in the 1980s and since then, standard procedures have changed and the facility isn’t able to meet all of those.

“We’re doing some strange things now in our current jail,” Jungermann said. “We don’t even have a work release tank anymore because that’s now a women’s tank because we don’t have any more space. We’re utilizing everything we can to try to meet the things that we are supposed to meet at the federal and state levels.”

Once the new building is finished and everything gets moved over, the county will demolish the current inmate housing area, he said.

The section that remains will still be used.

“We’re going to turn part of the old that we’re keeping into another squad room,” Jungermann said. “We’ve got canines now so we’re doing some things within that old facility for canines as well. Then we’re going to, for the first time, have a lot of evidence storage that we can keep more in a climate controlled environment.”

The facility will have upgraded technology so inmates could more easily appear before a judge via video call if they choose or need to.

The space issue carries over to the current Callaway County Courthouse, Jungermann said.

The Courthouse includes office space for various county departments such as the record of deeds, county clerk and commission offices. It also has two courtrooms. The county built it in 1938.

“We’ve only got two courtrooms in this courthouse,” Jungermann said. “There are days, and they don’t happen every day, but there are days that we have as many as four judges over here working and then they’re fighting over two courtrooms.”

Space isn’t just an issue for courtrooms either. The administration offices are also out of space.

“We’ve got one gal shoved … it is a closet,” Jungermann said. “It’s a bigger closet, but it’s a closet. That’s where her office is. So, we’ve used every space that we’ve got available in this facility.”

The justice center, which will be two blocks from the courthouse, will include four courtrooms and offices for the circuit clerk, the prosecuting attorney and juvenile court.

Jungermann said one thing that’s caused this issue is that when the courthouse was built, people weren’t thinking about growth or what the city of Fulton would do.

Another place that’s felt is the parking situation for the courthouse.

At the moment, the only parking available is on-street around the courthouse. There is a county parking lot on the other side of Fulton City Hall, but he said that’s too far for some people.“There’s very little parking,” Jungermann said. “It’s just around the block here. When we have jury trials and whatnot, people are parking, in some cases, four blocks away just to be able to park to get here.”

The new facility will have its own parking lot for about 40 vehicles.

Jungermann said the county broke ground on the center in July after demolishing the two buildings previously there.

They’re hoping for a September completion date, but there’s been some material delays that might push completion back to November or December.

The plan, Jungermann said, is to host an open house at each facility when it’s finished and invite members of the public to see them before fully moving everything in.