Another knock at midnight. Will the faithful answer? 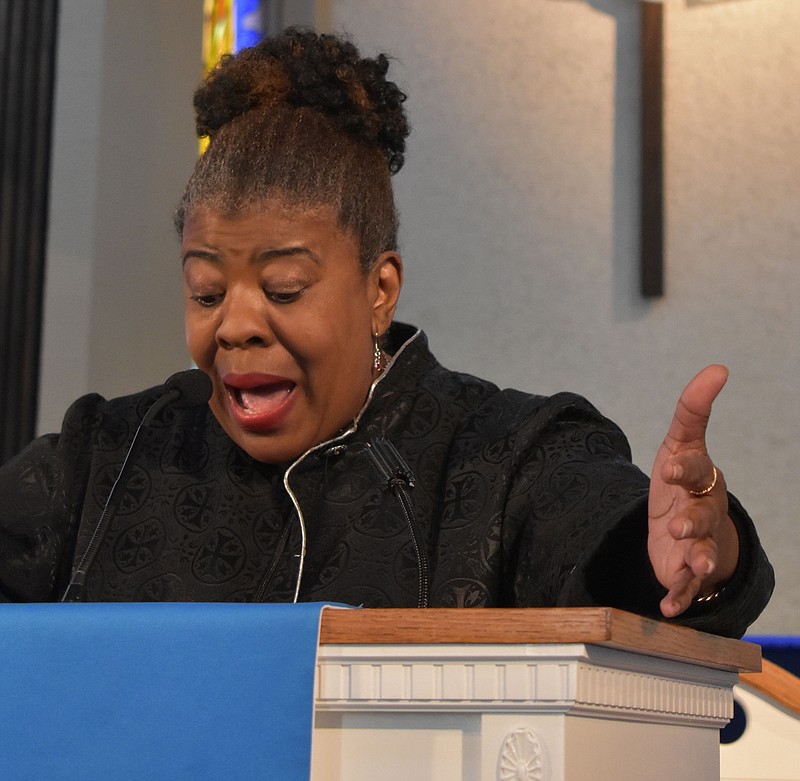 The Rev. Cassandra Gould updated a Martin Luther King Jr. speech for the current generation, saying it's up to churches to lead the way in dark times.

She based her speech on King's 1962 speech, "A knock at midnight," in which King spoke of a "midnight" -- a dark time in our society.

"I want you to think on these words: Another knock at midnight," Gould said. She said the pandemic has ushered in a "midnight" that "feels like the morning will never, never come."

"I want to suggest to you that it's Black people in this country, we have been in 403 years of midnight. We've been in midnight for a long time," she said.

She mentioned insurrectionists storming the Capitol a year ago, the 2020 death of George Floyd at the hands of police and the murder of Ahmaud Arbery. She also spoke about the suppression of voter rights and people languishing in prison who are either innocent or have harsh sentences.

In King's speech, he said more people than ever were believers who attended church. Now, it's the opposite: "It looks like midnight, even in the body of Christ," Gould said.

"Maybe sometime we've been targeting the wrong people," she said. "We've been trying to appeal to the moral compasses, if they had one, of some political figures on both sides of the aisle. This isn't a partisan statement."

But maybe "another knock at midnight" is God seeking churches to respond, she said, "so the people who live in our communities could be liberated and released."

"I believe that Dr. King, if he was here today, would agree that the church at large has been silent for too long. It's another knock at midnight. Last year it was the insurrection. Just a few days ago, it was people on both sides of the aisle who decided (Missourians) didn't want voters' rights passed."

Almost two dozen people attended the event, which was also livestreamed. The theme was "Darkness cannot drive out darkness, only light can do that!"

"We are in midnight," Gould said. "But when people of God get together, things start to happen."

Gould said she and 24 colleagues are on the 11th day of a hunger strike to support voting rights. She asked attendees to pray for her and the others.

Gould is a native of Alabama, where her mother, Carrie Jefferson, was a voting rights activist.

Prior to Missouri Faith Voices, she served as pastor of Quinn Chapel for nine years.

Next month, she'll start a new chapter of her life as the senior strategist at the Washington, D.C., office of Faith in Action, a national network of faith-based community organizations.

Also at the service, the Rev. W.T. Edmonson presented Gould with the annual Drum Major for Justice Award.

Caden Wilson was honored with the Young Drum Major certificate for his dedication and enthusiasm in playing drums at the church every Sunday.

Print Headline: Another knock at midnight. Will the faithful answer?