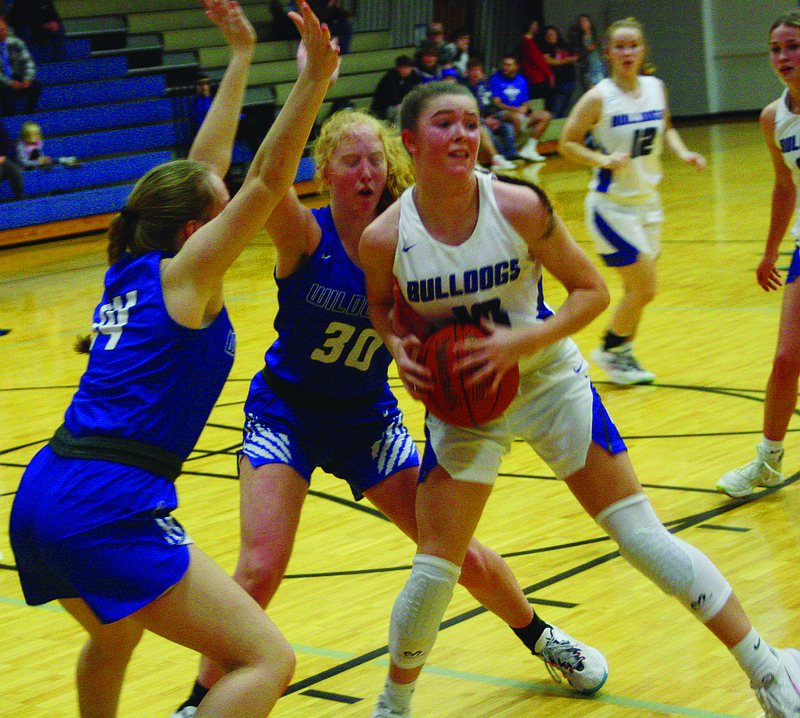 Senior Hailee Potter led South Callaway with 13 points Friday in its 58-24 loss to Montgomery County in the fifth-place game of the South Callaway Tournament at the middle school. She has also been charged to lead the offense while senior Raegan Brown recovers from injury. (Jeremy Jacob/Fulton Sun)

The South Callaway girls were facing Montgomery County in Mokane again so they knew what to expect from the Lady Wildcats.

This time around in the South Callaway tournament fifth-place game at the middle school, the Lady Bulldogs couldn’t handle the full-court press and were defeated 58-24 in the their first full game without senior and leading scorer Raegan Brown.

South Callaway (8-5) scored a season-low for points as it was still trying to adjust without the team’s point guard and the one who dropped 42 points in the 67-65 loss Nov. 22 to start this season.

South Callaway coach Daniel Burns said it obviously did play a factor based on how important Brown is to the offense, and playing a Montgomery County team that held off the Lady Bulldogs last time with Brown made the situation even more difficult.

“They are very athletic and are an impressive team,” Burns said. “So it’s kind of a difficult situation not having one of our top ball handlers and top scorer. However, we did some good things.”

The Lady Wildcats’ Olivia Shaw was doing some good things on the glass as she accounted for the team’s first six points and 13 of the team’s first 19 to give Montgomery County (8-5) a 19-6 lead after one quarter. She finished with a game-high 19 points

Burns said the Lady Bulldogs anticipated the Lady Wildcats would press, as that is what they’ve encountered in the past against them. The press made dribbling the ball past half court difficult for South Callaway, as the ball ended up going out of bounds and back the other way.

“We knew that coming in,” Burns said. “That’s what they do. They’re a full-court press team. We did some good things and broke it a few times, but a couple mistakes here and we turned it over too many times.”

Montgomery County began the second quarter on a 7-0 run in the first three minutes as Malia Rodgers finished the first half with nine of her 11 points after she actively swatted at the ball on defense and scored a layup on the fast break.

South Callaway hit its first and only 3-pointer after freshman Reagan Arrowood knocked one down to give the Lady Bulldogs 12 points. Miley Rieke ended the first half on a high note for Montgomery County after hitting a shot from deep, helping the Lady Wildcats obtain a 36-13 halftime lead.

Burns said senior Hailee Potter, who finished with a team-high 13 points following a 17-point performance in the 44-42 win Thursday against North Callaway, did a nice job again leading the offense after having so much thrust upon her after Brown’s injury. The Lady Bulldogs need to move as well without the ball now as Potter has done in the previous two games.

“We have our press-breaker,” Burns said. “Moving without the ball and playing hard are important because it is an up-and-down game.”

Some of this movement was seen as junior Lacey Matthews found open space where she could hit a mid-range jumper near the beginning of the third quarter. Arrowood and senior Grace Pontius were also finding pockets in Montgomery County’s defense but just weren’t finding the bottom of the net.

The Lady Wildcats hadn’t stopped doing that as Maddy Queathem, who finished with seven points and made the all-tournament team with Brown, found a basket inside before Claire Cobb found three points from outside.

Halfway through the third quarter, Montgomery County had a 45-17 lead, which freshman Kelsey Wetherall made 45-21 going into the fourth quarter after an offensive putback.

Potter kept driving to the rim in the fourth as the Lady Wildcats patiently found points in the paint as the game grew older. She went 5-for-8 at the free-throw line after taking six attempts in Thursday’s game.

Burns said the team has to figure out how to function in this new arrangement while Brown recovers from her head injury because it is uncertain whether she’ll be back in time for South Callaway’s next game at 6 p.m. Thursday at home against New Haven (8-4). The Lady Shamrocks were the runners-up in the South Callaway Tournament after losing 30-18 to Fatima on Friday.

“Hailee did a good job stepping up,” Burns said. “We’re going to need some other people to score. It’s hard to score when you’re top scorer is out, especially when against a team like that with all that pressure. This is an opportunity for other girls to step out of the comfort zone and help us score some more points and do some things they may not normally do.”