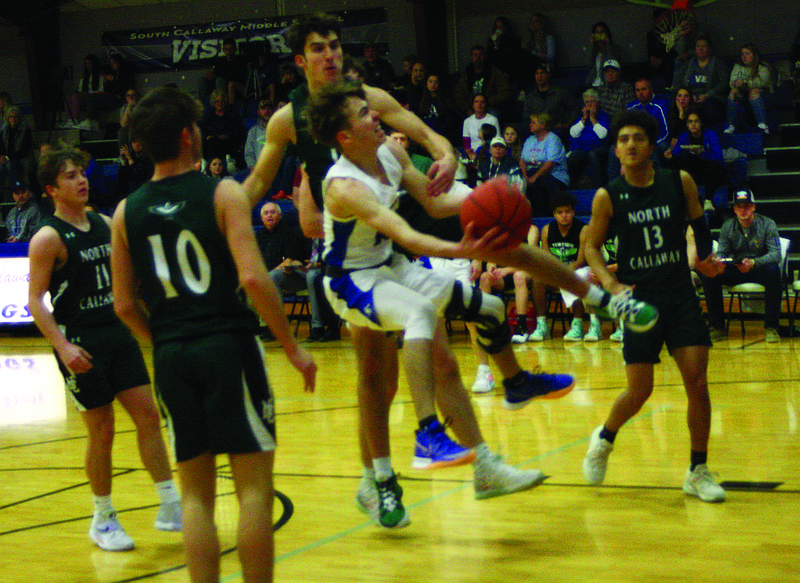 South Callaway senior Trynnen Gray throws up a shot in the team’s 54-53 win Friday against North Callaway in the fifth-place game of the South Callaway Tournament at the middle school. Gray led the Bulldogs with 13 points but scored 11 of them at the free-throw line, giving South Callaway the winning points in the final seconds. (Jeremy Jacob/Futlon Sun)

There was no school that day because of an increasing COVID-19 presence but fans of South Callaway and North Callaway boys basketball packed the gym, where they saw the Bulldogs defeat the Thunderbirds 54-53 to take fifth place at the South Callaway Tournament. In the final two minutes alone, there were six made free throws, three lead changes, two 3-pointers and an amped South Callaway team that was eager to avenge the 71-39 loss to North Callaway on Jan. 4 in Mokane.

South Callaway coach Seth Thomas said the game depended on every single possession, and the physicality South Callaway (8-5) brought with them this time around helped them throughout the game.

“(North Callaway) is a physical team as well,” Thomas said. “We kind of matched that and played with a lot of intensity. “(The previous game) was in the back of our minds and all credit to those boys — every single one of them.”

North Callaway coach Matt Miller said there wasn’t much else the Thunderbirds (7-5) could do because games like this, which he aptly described as “a dogfight,” oftentimes come down to which team possesses the ball last. South Callaway was able to take the last possession after senior Trynnen Gray, who led the Bulldogs with 13 points, dove on the floor for a ball that was jostled away from sophomore Sam Pezold, who led the Thunderbirds with 21 points.

Going in, Miller said he also knew South Callaway would be a much different and motivated team than it was the last time it played the Thunderbirds.

“Someone’s got to lose, and unfortunately, it was us,” Miller said. “I told the boys before the game started, ‘This is going to be a much different game from last time.’ I knew after that game that we weren’t maybe that good and South Callaway was not that bad.”

South Callaway started flat, as the open shots they were getting seemed not to fall like what occurred in Thursday’s 49-31 win against New Bloomfield. The Thunderbirds flew out ahead 9-0 as junior Trenton Jones picked up a couple of offensive rebounds and buckets to begin his 11-point, 10-rebound day. The score was 12-1 North Callaway with two minutes left in the first quarter — where South Callaway did some of its best work.

Sophomore Ryan Lepper, who finished with seven points, snagged the offensive board and put it back for the first of four straight South Callaway makes. Senior Trace Helsel and sophomore Tayber Gray knocked 3-pointers to make the crowd progressively louder until it became unglued after sophomore Evan Sconce-Martin hit the game-tying shot to put this game back at square one after one quarter.

Thomas joked after Thursday’s struggles from the field South Callaway was saving all those shots for Friday, which seemed to have some truth after the Bulldogs’ early run. Kidding aside, he said he credits his players for maintaining such confidence to keep shooting and trust their abilities.

“Those shots (Thursday) were the same shots we wanted to keep taking,” Thomas said. “They’re very mentally tough, and I’m super proud of all of them. It’s tough to keep shooting when it’s not falling down.”

Pezold is a player North Callaway wants to keep shooting, as he hit back-to-back 3-pointers to give the Thunderbirds back their cushion until they had a 25-18 lead with five minutes left in the second quarter.

Miller said Pezold doesn’t seem like a sophomore based on how he plays, as he finished the game with five 3-pointers and was a perfect 6-for-6 from the free-throw line in the fourth quarter.

“He is a sophomore, but he plays steady like a senior,” Miller said. “He is level-headed, and he can score from all over the floor. He is going to get better every game.”

With halftime approaching, South Callaway was falling behind again as North Callaway kept pounding the paint and earning trips to the line, where it was 20-of-30, to build a 32-20 lead.

Lepper’s 3-pointer seemed to infuse the Bulldogs with more energy as the second quarter was ticking down to about two minutes. North Callaway had a hard time warding off the relentless South Callaway defenders as senior Sam Buckner, who finished with seven points and 11 rebounds, ended the Bulldog fast break with a layup to cut the deficit to 32-29 with 1:24 left.

South Callaway didn’t wait until the clock struck two minutes in the third quarter. Around the three-minute mark is where the Bulldogs came roaring back again and where Helsel and Tayber Gray knocked down 3-pointers to tie the game at 35.

Weber, who made the all-tournament team for the Thunderbirds, gave North Callaway a cushion again after knocking down a couple free throws. Six of Weber’s 10 points happened at the free-throw line as he still found ways to score even though the Bulldogs did not lose him this around, Thomas said, as he dropped 30 points in the first meeting.

“We just challenged our guys to be a little more physical and really now where (Weber and Pezold) are at because of how good they are and how they make them run and how they work,” Thomas said.

Trynnen Gray had not scored from the floor up until the point South Callaway was down 39-37, but that changed as he made the hoop while he was harmed to go to the place he was comfortable on Friday: the free-throw line.

Gray made 11-of-13 free throws, including one to give the Bulldogs a 40-39 lead. South Callaway’s leading scorer, and all-tournament team representative, is the player Thomas said he wants at the free-throw line as well.

Pezold was still composed from the 3-point line, though, as he slingshot North Callaway ahead 42-40 soon after, but the Thunderbirds lost more than just a lead heading into the fourth quarter, which began tied at 42.

Weber was called for a technical foul after bumping into a South Callaway defender, which put him at the limit to make him watch the rest of the game from the bench. Miller said North Callaway did not let that affect them as the Thunderbirds still made the plays to win the game.

Miller said his team still had the size and inside presence of Jones, Pezold and Isiah Craighead, who finished with nine points. South Callaway might have wanted the ball in Trynnen Gray’s hands down the stretch, but the Thunderbirds were comfortable giving it to their big guys.

This strategy worked, as North Callaway attempted 11 of its free throws in the final quarter and had a 49-46 lead with 2:17 left.

“We were trying to attack the rim,” Miller said. “We knew they were in foul trouble, and we were in the double bonus so we were going to try to attack the rim, whether that was through Pezold or Jones ideally.”

Tayber Gray knotted the score at 49 after splashing a 3-pointer, only for Pezold to take a trip to the line as South Callaway had 10 fouls in the second half. He knocked them both down and then Helsel from the wing gave South Callaway a 52-51 lead with 35.2 seconds left.

Pezold gave the Thunderbirds their lead back as the game clock was ticking down from 10 seconds with South Callaway still trailing, and Trynnen Gray drew contact at the rim before hitting the floor for only the first time in the final minute. Gray stayed perfect from the line after missing his first two in the first quarter to give South Callaway a 54-53 lead with just 4.9 seconds to go.

North Callaway quickly brought the ball down the floor only for it to end up with Gray’s arms around it to trigger the jump ball and grant South Callaway the crucial final possession.

Thomas said anytime the team can win a rivalry game like this, it feels more special, even more so after the tough way South Callaway began its 2022 with the first game against North Callaway. This win also points the Bulldogs in the right direction heading into the rest of the season.

“I think we’re trending in the right direction of where we want to be in the second half of the year,” Thomas said. “I’m glad it happened on Friday, and they can sit there and enjoy it and have fun over the weekend.”