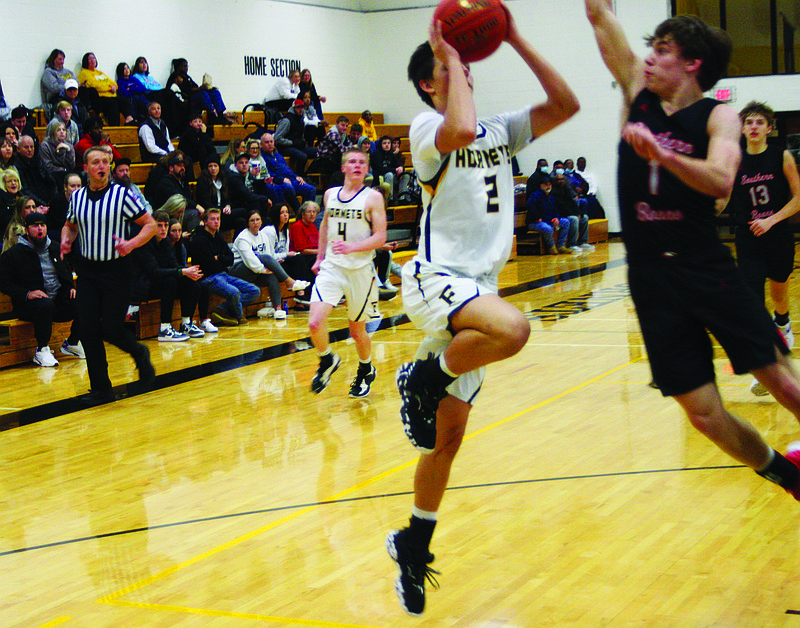 Junior Dustin Hagens rises up for a shot on Jan. 5 in Fulton’s 68-56 win at home against Southern Boone. The Hornets defeated the Eagles 73-43 on Thursday before successfully defending their title in the California Tournament on Friday with a 70-59 victory against Capital City. Hagens supplied Fulton with some minutes in the starting lineup and added to a team effort on the defensive end during the two games. (Jeremy Jacob/Fulton Sun)

The Fulton boys were able to follow Thursday’s defensive performance with another strong outing Friday against Capital City.

That earned the Hornets the California Tournament championship for the second straight year, defeating the Cavaliers 70-59. Fulton was led by juniors Josh Reams and Walker Gohring, who scored 22 and 21 points, respectively.

Fulton coach Justin Gilmore said it was similar to Thursday’s 73-43 win against Southern Boone, in that his players were tight-knit and defended well throughout the game.

“We did not give up a lot of points on half-court defense,” Gilmore said. “It was the same story, but we just get better and better on the defensive end.”

Gilmore said Fulton (10-4) giving up only 20 points in the first half to Capital City (9-8) was “phenomenal,” as the Hornets made the effort a day after their previous game to “sit down and guard” and “shut down the lane.”

Gilmore said Capital City ran a lot of high ball screens and have someone who is quick and is capable of going downhill in Corde Brown, who led the Cavaliers with 30 points. Even though Fulton did a nice job again of taking away the lane, he said Brown has a fantastic ability to score there anyway and get to the free-throw line.

“We challenged our guys to keep him in front of you,” Gilmore said. “You could just tell they were grinding and fighting and giving up everything they had left in the tank to try to win the tournament, and they did that.”

Many of the Hornets were crucial in winning this tournament, especially in the championship game, Gilmore said as his team had a good rebounding game, which started with sophomore Javar Galbreath. He finished with nine points but was “a monster” on the offensive and defensive glass and had probably his “two best rebounding games of the year.”

Seniors Brynn Bynum and Ziek Reed defending well off the bench also add to the many aspects Gilmore said his team has that demonstrate the Hornets are coming together as a team, beside the fact Reams and Gohring come through regularly in the scoring department. Reams and Gohring averaged 20 and 18.5 points per game, respectively, in the team’s two California Tournament games.

Fulton now has two straight home games early this week before its next tournament in Harrisburg. The Hornets host Eldon at 7:30 p.m. Monday before facing North Central Missouri Conference foe Moberly (5-8) on Tuesday at around the same time following the girls varsity game at 6 p.m.