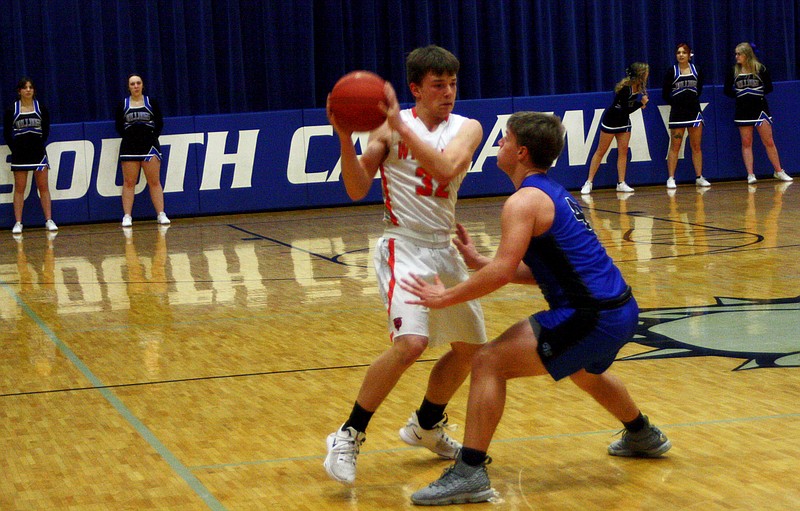 The South Callaway boys weren’t making the shots early Thursday but still made New Bloomfield pay at the line.

The Bulldogs finished the night 20-for-28 from the free-throw line to defeat the Wildcats for the second time this season — won 57-32 on Dec. 10 in the Norm Stewart Classic — and move on in the South Callaway Tournament to the consolation bracket championship game today against North Callaway. Leading the way for South Callaway was senior Trace Helsel, who had 13 points and went 6-for-8 from the line, and senior Trynnen Gray, who added 12 points and a 7-for-8 night from the line.

Head coach Seth Thomas said the Bulldogs (7-5) had a consistent brand of defense from all of their players regardless of the score in the game. The first points of the game weren’t attained until halfway through the first quarter as both teams were still trying to feel each other out.

“Just like I always tell them, defense always plays,” Thomas said. “The shots weren’t falling, but we left a lot of makes for tomorrow. You should always play defense because it is always something you have control of.”

Sophomore Tayber Gray gave South Callaway a high-percentage shot when he turned a turnover into a fastbreak bucket. New Bloomfield was able to cut it to 8-6 before sophomores Evan Sconce-Martin and Dane Daugherty gave the Bulldogs more of a cushion and an 11-6 lead after one.

New Bloomfield head coach Zach Buscher said he thought the Wildcats were “locked in” defensively and did a nice job of executing the game plan. Like South Callaway, New Bloomfield (2-14) had several opportunities to make close shots but couldn’t convert while also going 2-for-8 at the free-throw line.

“What hurt us was missing our layups and free throws,” Buscher said. “A few too many turnovers, but we just need to capitalize on the shots we do get. We make those bunnies, and this game stays close until the end.”

While Helsel and Trynnen Gray combined for two field goals in the first half, they also combined to go 5-for-7 from the line to stay ahead of the Wildcats, who had 3-pointers from freshman Jake Fuhriman and sophomore Nate Fuhriman before South Callaway built a 21-14 lead with about two minutes left in the second quarter.

Thomas said he liked all the shots his players were taking but also liked the aggressiveness that kept earning trips to the line while the Bulldogs were working through it.

Senior Trevor Jordan had been quiet up until that point but refused to be silent anymore as he knocked down a 3-pointer to make it 21-17 with seconds left in the first half to make it 21-17 South Callaway at halftime.

Buscher said Jordan is typically the team’s leading scorer, averaging 13.8 per game, but was taken away by South Callaway. Other plays like Nate Fuhriman made plays that kept New Bloomfield in it.

“I thought South Callaway did a good job on Trevor, so we had to have other guys step up offensively,” Buscher said. “Good things are going to happen to these young men if they work as hard as they did tonight.”

The second half began more active play out of both teams as the Bulldogs and Wildcats were rushing around for the ball to take the first advantage. Senior Sam Buckner struck the first blow as he got fouled while making a layup and then Helsel didn’t get bumped but fell down while he drained a 3-pointer to give the Bulldogs a 30-21 lead after three.

New Bloomfield scored four points in the third quarter as South Callaway allowed a Jordan bucket and had a defensive lapse that left senior Michael Saleny alone at the rim. Thomas said this is the “defensive consistency” he was talking about before the Bulldogs were able to go an offensive roll.

“I would take the majority of those shots day in and day out from the guys that were taking them,” Thomas said. “Defensively, we did a pretty good job of making them take tough shots and keeping them off the glass.”

The Wildcats had the first points of the fourth after senior Parker Coffindafer was fouled at the rim during a layup, but the Bulldogs rattled off a 15-1 run to take a 45-28 lead with 1:23 left in the game. South Callaway went to the line its final eight times to complement all the shots that were going down to give the Bulldogs the distance they wanted.

Junior JT Thomas converted from deep, and Gray scored his two field goals in the fourth, including a 3-pointer that capped streak of 12 straight points from South Callaway after the Coffindafer bucket. Senior Aidan Carr sank a hook shot to give New Bloomfield some life before the Wildcats erased the 20-point deficit the Bulldogs created.

South Callaway will face North Callaway (7-4) for the second time this season — after Calvary Lutheran dropped out Thursday — as part of a six-game slate today after Saturday games were moved due to the incoming winter weather. The Thunderbirds defeated the Bulldogs 71-39 on Jan. 4 in Mokane.