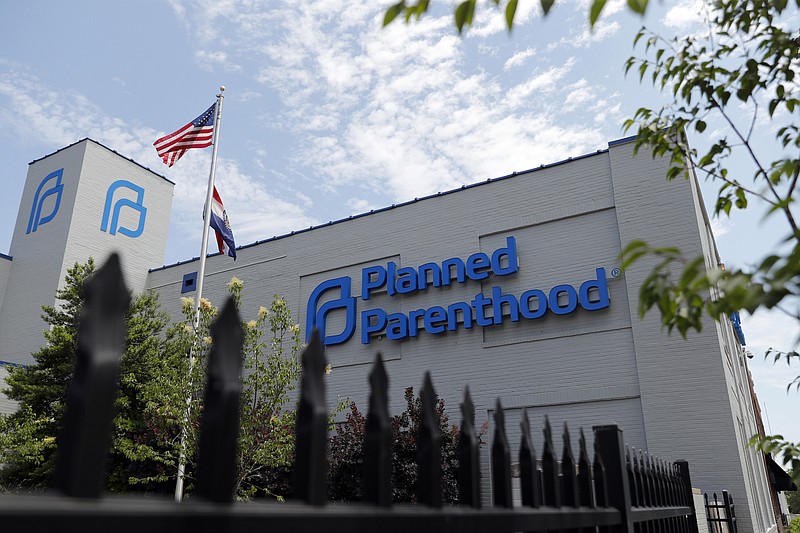 JEFFERSON CITY, Mo. -- A state hearing about a bill to defund Planned Parenthood was met with polarized inquiries, testimonies and, in some cases, a history lesson.

The proposed Missouri legislation would make it unlawful for public funds to go toward any abortion facility or its affiliates.

There is only one licensed abortion provider in the state -- Planned Parenthood.

Sponsored by Rep. Nick Schroer, R-O'Fallon, House Bill 1854 would remove the MO HealthNet -- Missouri Medicaid -- funding the institution receives and subsequentially all the related health care services it provides. Schroer noted the current bill is the same as one presented in the 2021 first extraordinary session.

"It fully defunds Planned Parenthood pursuant to the Supreme Court decision, giving guidance to the Legislature and also enacts protections at the state level to ensure that your tax dollars are not subsidizing the heinous act of abortion," Schroer said.

The bill would require the Department of Health and Senior Services to suspend, revoke, cancel or refuse any contract with a provider that does not qualify under the proposed bill, by means of the conviction of crimes related to fraud and patient care, patterns of discrimination and that the provider is an abortion facility.

Though Rep. Schroer stated the bill's goal is ultimately to defund Planned Parenthood, Rep. Raychel Proudie, D-Ferguson, and Rep. Tony Lovasco, R- O'Fallon, voiced concerns regarding the subjective language included in the section of the bill.

"I do support your bill," Lovasco said. "I do have one concern, though, that I think you (Schroer) may wish to look at or perhaps comment on in relation to that list of exceptions at the end of the bill."

That section of the bill states no funding would go to any institution that:

"Has a pattern of intentional discrimination in the delivery or nondelivery of any health care item or service based on the race, color, or national origin of recipients, as described in 42 U.S.C. Section 2000d, or was founded by a person who supported eugenics as the solution for racial, political, and social problems and who advocated for the use of birth control for 'the elimination of the unfit' and stopping 'the reproduction of the unfit.'"

Lavasco said: "It goes without saying, I find those views abhorrent. I am concerned that perhaps using a set of least political views by a founder of an organization as a test to determine whether they qualify -- we might be on some shaky First Amendment grounds there."

Proudie added: "I know that (in 42 U.S.C. Section 2000d) is the Civil Rights Act, of course. I understand where it's coming from, I just, I'm trying to sort of wrap my mind around the way in which it is worded."

Schroer said the statement regarding eugenics was in reference to the founder of Planned Parenthood, Margaret Sanger, who died in 1966.

"Nobody here can argue the racist angle under which it (Planned Parenthood) was founded," Proudie said. "Things change."

But she said, "I'm kind of confused as to when it's appropriate to evoke founders and founders' intent and when we stop doing that," adding the same standards could be applied to many different topics of debate in the current legislative session.

During the hearing, other state representatives voiced opinions on the current standing of Missouri abortion regulations, along with the effects the bill would have outside of the act of abortions if signed into law.

Other Missouri lawmakers have also sponsored bills that would limit access to abortions and related health care services.

Witnesses on both sides of the argument testified at the Wednesday hearing.

Delegates from the Campaign Life Missouri, Missouri Right to Life and Missouri Catholic Conference spoke in support of the bill while advocates from Missouri Family Health Council, Pro-Choice Missouri and Planned Parenthood spoke against it.

"This is a very important issue to the pro-life community, and it has been for decades," said Samuel Lee, director of Campaign Life Missouri. "I want to go back to the fact that the Missouri Supreme Court in June of 2020 said if the Legislature wants to defund Planned Parenthood you have to do it by statute."

M'Evie Mead, director of legislative affairs for Advocates of Planned Parenthood of the St. Louis region and southwest Missouri, spoke on how the proposed bill would affect the thousands of patients treated by Planned Parenthood for services outside of abortion.

"I know many of you are super concerned about your constituents and their access to health care. That's exactly what this bill is about, and what this bill gets between," Mead said. "Previous witnesses have given data and stats about the safety net and how much in need it is for additional capacity, and that this is a significant reduction in the capacity and that will impact the health and well-being of your constituents, of the people of Missouri, and patients are at the center of what this issue is."