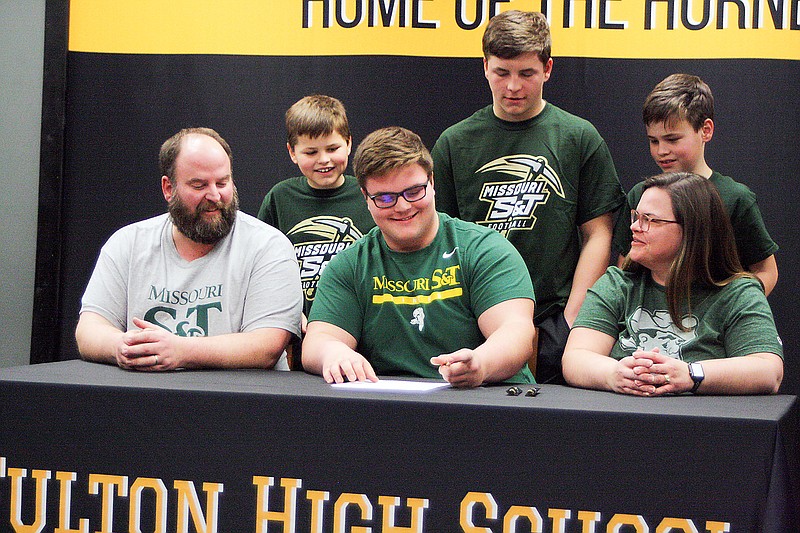 Because of Curtis Humphreys’ focus on the little things, he is making the big jump to college football.

The Fulton senior made it official Monday in the Fulton High School library, when he signed his letter of intent to play offensive line for NCAA Division II Missouri S&T.

In his search for a school, the all-North Central Missouri Conference and all-district player said he looked at several schools, but the Miners’ football program and the university’s campus seemed to be the best fit for him as they offered the “little things” he values.

“What it really came down was the little details,” Humphreys said. “It’s definitely a family atmosphere, and obviously, it’s a good school academically too. Football I’m going to do for the next four years, but past football, academically, I wouldn’t say it’s the most important thing to me right now, but it definitely is very important down the road.”

For Humphreys, the atmosphere and comfortable academic environment where he will study physical therapy meant much to him beyond just the football program.

Fulton coach Dana Chambers had Humphreys for only a season, but in that time, Chambers said Humphreys was someone who put in the work and provided good leadership on and off the field.

“He is a four-year starter, so with that experience, you can’t really replace that,” Chambers said. “He started every game this year. He was someone we could rely on and ran behind him and rank our offense behind him a lot. He was a big part of our offense as far as being a leader.”

Thanks to Humphreys and the other seniors on the team, Chambers said he became better acclimated to his new home and new position at Fulton.

Chambers said Humphreys was one of the dependable parts of the Hornets’ offense under him the previous season but acknowledged he was being that mainstay on the offensive line even before he got there. Humphreys started all four years, made the all-NCMC team three years and the all-district team two years. He is coming off a senior season when he was first team all-conference, all-district in the Class 3 District 5 and second team all-district on the Central Missouri media team.

“He did a heck of a job this year,” Chambers said. “From the day I got the job, he just started working and asking what he could do to get better because he wanted to play college football. We talked about that and talked to his parents about the process. He’s done everything I asked of him, and it’s rewarded him. He deserves it.”

Missouri S&T finished the 2021 season with a 6-5 overall record and a 4-3 record in the Great Lakes Valley Conference. The Miners had a top-25 offense in the nation, ranking 23rd at 36 points per game, 24th in total yards per game at 439.8 and 22nd in passing yards per game at 270.2. In the GLVC, they respectively ranked third, second and second in those same categories.

In the previous five seasons, the Miners ended each year with a winning record, including a 10-2 season in 2018 they capped by winning the Mineral Water Bowl 51-16 against MSU Moorhead.

Humphreys said he is ready to dig in at Missouri S&T as this feels like a longtime dream coming true.

“It’s been a dream for sure to play football ever since I started playing high school football,” Humphreys said. “S&T is a definitely a cool place. I’ve been down there. It’s a good football program so it will be to nice to just continue to play football for the next four years.”