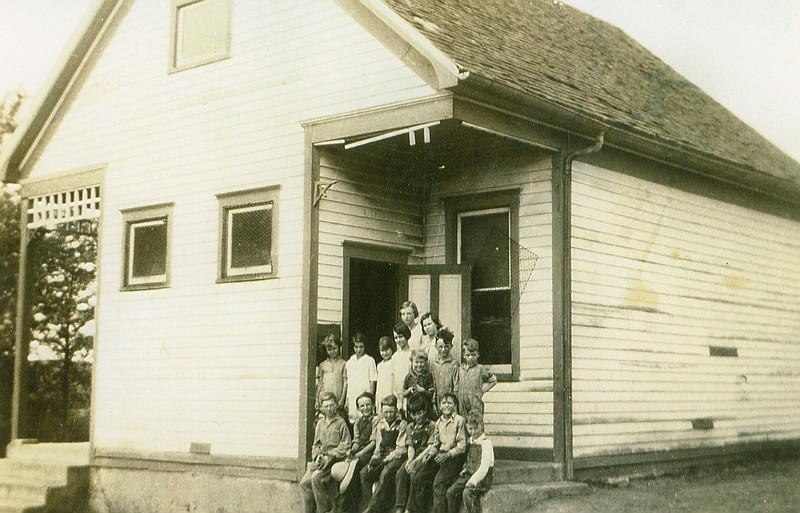 Photo courtesy Kingdom of Callaway Historical Society A photograph of the Duncan School and students in the 1920's. The Duncan School is featured in the 100 years ago (1922) section.

The first year high school at Duncan school, south of Millersburg, has been approved by the state educational department, following an inspection last week.

Judge Thomas W. Herring, five term Judge of the County Court, died at his Auxvasse home. He was about 75 years old, and was born in Callaway, a few miles north of Fulton. He retired from the county bench in 1914. He was a son of James C. Herring, who came here from Virginia in 1838. He at once commenced work in the first steam mill ever in the county- that of White and Jones, which he later rented and ran for 17 years. Judge Herring engaged in farming in different parts of the county and was also connected with the Callaway Hardware Company and had a host of friends in the county of his birth. He is survived by his wife and son, Willard, now living in Wyoming and who was elected sheriff of his county.

Callaway County Cured Hams for Christmas. These hams have a wide reputation throughout the country from the Atlantic to the Pacific, thanks to local folks sending them as Christmas presents.

Retires After 43 Years' Service. R.H. Green has tendered his resignation to the Alton Railroad Company. He began his work in 1904 at Bates City and worked almost eleven years on the main line. He was later an agent at Shackelford, Mo. for six years. He began in Auxvasse in June 1915, serving a total of 32 years as agent there. He has earned a period of rest and, we hope, many nice vacations.

A baby girl was delivered at Central Christian Church to Mr. and Mrs. Larry Baumgartner immediately after the Callaway Ambulance crew moved Mrs. Baumgartner from her car to the ambulance. The mother and daughter were dismissed from the hospital the next day. Harold Love, ambulance service director said that he and Mrs. Ollie Johnson delivered the baby. The father 'couldn't do anything in the back to help us so we had him drive.' The baby's name is Sheila Marie. If no more babies are born in Callaway before midnight, Dec. 31, the ambulance crew will have delivered the first baby born in 1972 and the last baby born in 1972. They delivered a baby near Kingdom Trailer Court when the ambulance slipped into an icy ditch on the way to the hospital in early January.

Number one of the top ten stories of 1997 in Callaway County dealt with property tax shock. Last summer, Callaway County taxpayers suffered property tax shock after the first countywide property reassessment since 1985. The assessed value of residential property in the county increased an average of 25 percent. The Hancock Amendment to the Missouri constitution requires voter approval for all new or increased taxes. It also requires tax districts to offset the effects of a favorable reassessment by rolling back their tax levies. Both Fulton and North Callaway school districts rolled back their tax levies but neither rolled back its operating levy to below $2.75 per $100 assessed property valuation, the point at which the districts would have incurred penalties in receiving state aid. These residents saw their property tax increase as a result. The Callaway County R-3 School District and most other taxing entities in Callaway reduced their levies to offset the increase in property values.

Number one of the top ten sport stories of 1997 in Callaway belongs to Scott Pingel, Westminster College's wide receiver sophomore for his All American honors. He had 98 receptions for 1,420 yards and 17 touchdowns in 1997.