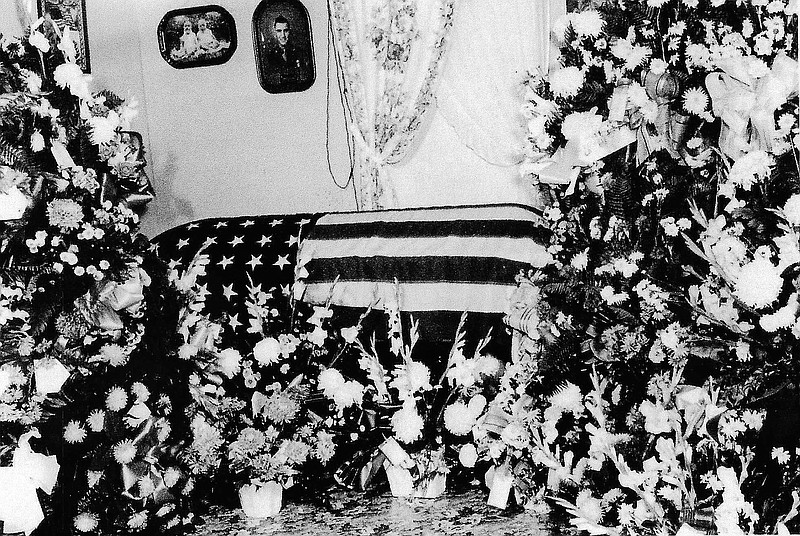 Courtesy/Roger Baker The remains of Elmer Baker Jr. were returned to his family in 1948. Following a brief wake at their home in New Bloomfield, he was interred in Riverview Cemetery in Jefferson City.

As a young child growing up in a Christian household, the Christmas holiday was supposed to be a joyous period filled with tender moments shared with loved ones.

But, Roger Baker said, it became a time of the year filled with sorrow for his parents, who were reminded of the loss of a son killed in a World War II tragedy.

Decades later, Baker has embarked upon a personal mission to celebrate the memory of his late brother and ensure his heroism and selfless service is never forgotten.

Elmer August Baker Jr. was born in Cedar City on Nov. 12, 1922, and went on to graduate as the valedictorian of his class in 1942 at New Bloomfield High School. Several months later, on Jan. 25, 1943, he was inducted into the U.S. Army at Jefferson Barracks in St. Louis.

"Pfc. Elmer Baker ... who recently completed his training at Fort Leonard Wood, has been transferred to Fort Crook, Nebraska," reported the Sunday News and Tribune on April 4, 1943. The newspaper added, "He is now enrolled in the Ordnance Motor Transport School."

Roger Baker, the soldier's younger brother, said, "In December 1942, the United States established the Army Specialized Training Program (ASTP) to train and educate academically-talented enlisted men as part of a specialized corps of Army officers to rebuild Europe after the war was won."

He continued, "Utilizing major colleges and universities across the country, the Army would provide four years of college education in two years. My brother Elmer quickly enlisted, was tested and entered that program in the latter months of 1943."

With the pace of war increasing and the need for combat troops growing, the ASTP was soon disbanded and Baker, along with many of his fellow soldiers in the program, were eventually assigned to infantry units.

Elmer Baker became a member of Company K, 262nd Infantry Regiment of the 66th Division stationed at Camp Robinson, Arkansas. It was there he began training for overseas deployment prior to moving with the regiment to Camp Rucker, Alabama, in April 1944.

"After coming home for a brief furlough in September 1944, they sailed out of New York harbor on Nov. 15, 1944, and then disembarked at the ports of Southampton and Plymouth, England, on Nov. 26, 1944," Roger Baker said of his brother's military travels.

"Sgt. Baker went into cantonment at the Camp Blandford near Dorchester, England," he added. "Then, on Dec. 23, 1944, the 262nd and 264th Regiments of the 66th Division moved out of camp and proceeded to the docks at Southampton on the English Channel."

After waiting several hours on the docks, the regiments received orders to board two troop ships -- the HMS Cheshire and the SS Leopoldville -- in the early daylight hours of Dec. 24. Sgt. Baker was among approximately 2,000 men aboard the SS Leopoldville set to sail to France as relief for U.S. forces in the Battle of the Bulge.

"At dusk on Christmas Eve, about five miles off the coast of France ... the Leopoldville was torpedoed by a German U-boat," said Roger Baker. "The final count of casualties was more than 800 infantrymen out of a compliment of 2,000. Somewhere around 300 bodies were found; 500 or more were never found."

The body of Sgt. Baker was among those recovered and transported to the American military cemetery at Sainte-Mère-Eglise in France.

For many years, the sinking of the SS Leopoldville was concealed to prevent leaking such information to enemy intelligence or to negatively impact morale on the home front. Many intelligence documents related to the sinking were not declassified until the late 1950s.

"After the war, the soldiers were also ordered at discharge not to talk about the sinking of the SS Leopoldville to the press and told that their GI benefits as civilians would be canceled if they did so."

The family of Sgt. Elmer Baker eventually learned of the details of their loved one's wartime fate. Nearly four years after his death, as part of a program to repatriate the remains of servicemembers laid to rest overseas during World War II, Baker's remains were returned home to his family.

"The news came that my brother would be coming home, and my mother was ecstatic," Roger Baker said. "She, her three sisters, other friends and relatives began to feverishly make plans for his arrival."

Baker added, "After a few weeks, all the arrangements were completed as the appointed day and time of his arrival drew near. On a beautiful, cool, fall afternoon, we all loaded into the car and drove to the station in Jefferson City and waited patiently for the train carrying his coffin to arrive."

Although only 6 years old at the time, Roger Baker clearly recalls the brief wake held for his older brother in the living room at their home followed by his burial in the Baker family plot at Riverview Cemetery in Jefferson City.

"Our parents instilled in me, my brothers and sister as we grew up that our older brother was a hero worthy of being emulated," said Roger Baker. "He worked hard and earned a reputation for being an honest and hard-working man. We were expected to live up to that model."

In appreciation, he added, "One of the most important things taught to us was that nothing in life is free. We were expected to work hard and live morally to secure the better things in life, thus honoring my brother's sacrifice."

Jeremy Amick is the public affairs officer for the Silver Star Families of America. 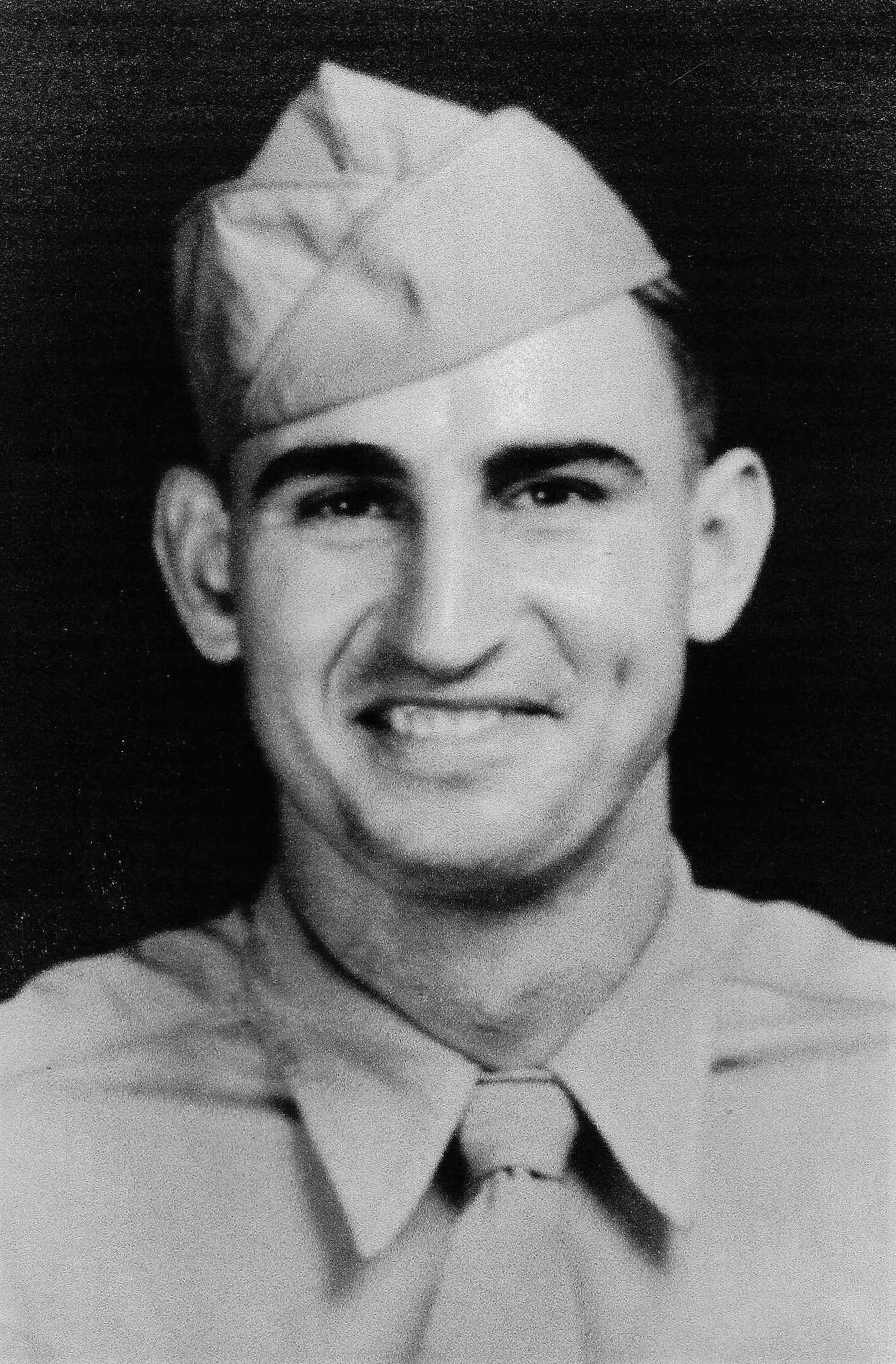 Courtesy/Roger Baker: Elmer A. Baker was the valedictorian of his class at New Bloomfield High School prior to his induction into the U.S. Army in World War II. He was killed off the coast of France on Christmas Eve 1944.