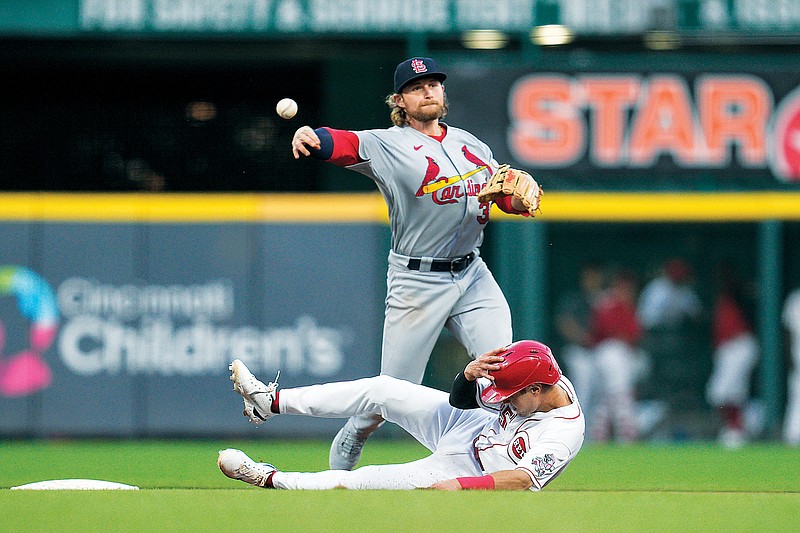 Cardinals second baseman Brendan Donovan throws to first base above a sliding Alejo Lopez of the Reds to complete a double play during the fourth inning of Tuesday night’s game in Cincinnati. (Associated Press)

Cardinals slugger Albert Pujols went 0-for-2 and was hit by pitch from Justin Dunn that caromed off his chest and caught his right forearm in the second inning. Pujols stayed in the game for the N.L. Central leaders and remained at 694 home runs, two behind Alex Rodriguez for fourth on the all-time list.

Hudson (7-7), who had been 3-0 with a 1.93 ERA in three career starts at Great American Ball Park, gave up five straight hits to start a four-run burst in the third. Romine’s go-ahead liner that reached the front row of the seats in deep right-center field made it 2-1.

“Hudson has a really good sinker and throws sliders away, so you have to really choose what side of the plate you need to own,” Romine said. “I was trying to hang over the plate. He threw a good slider on the pitch before that I laid off. He threw a pitch over the plate, and I tried not to do too much with it and stay with a right center approach.”

Romine, who was with the Cardinals on their last visit to Cincinnati right after All-Star break, snapped a 0-for-12 slump. The Reds purchased his contract at the trade deadline.

“I felt all right,” Hudson said. “I kept the ball on the ground. They just hit a lot of shift-beaters. I felt like I was in control for the most part. I was putting it where I wanted.”

MVP candidate Paul Goldschmidt was hitless in three at-bats with two strikeouts and a walk. He is 0-for-7 with five strikeouts in the series.

Dunn went four innings in his fifth start after missing the first half of the season with a right shoulder strain. He yielded just three hits and one run, which came on Tommy Edman’s leadoff homer in the third, and struck out four.

“Dunn is going to be fine,” Reds manager David Bell said. “He had a little shoulder tightness. It is something pitchers deal with. He is not injured. His velocity was down that last inning we just wanted to be safe. Our bullpen came in and was outstanding.”

Notes: The Reds plan to honor Pujols and C Yadier Molina in a pregame ceremony today. The game will be the last in Cincinnati for both players, who have announced their plans to retire after the season. … Perennial Gold Glove 3B Nolan Arenado deftly handled a tricky hop on a grounder by Kyle Farmer that bounced off of third base and turned it into a forceout at second with a leaping throw in the first inning. … Reds OF Albert Almora Jr. (right shoulder contusion) was scheduled to begin a rehab assignment today with Triple-A Louisville. Almora has been on the 10-day injured list since Aug. 20. … Cardinals LHP José Quintana (4-6, 3.45) pitched seven shutout innings in his last start against Cincinnati, won by the Pirates 1-0 on May 15 at Pittsburgh despite being held hitless by Hunter Greene and Art Warren. Reds LHP Mike Minor (3-10, 6.10) has won back-to-back starts for the first time all season.