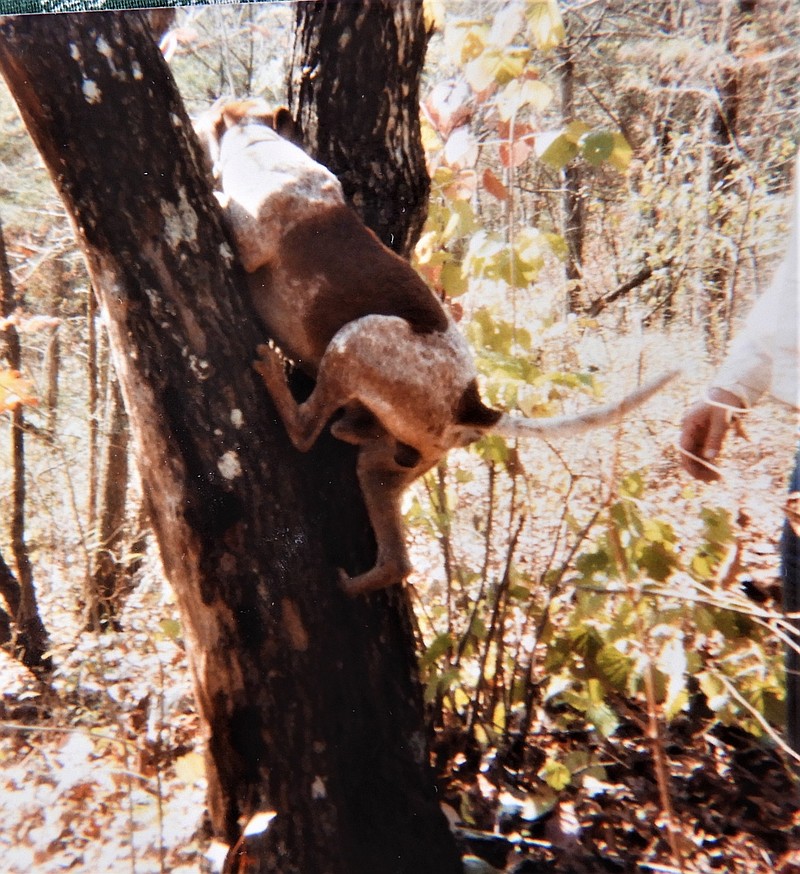 Ribs climbs a tree after a racoon.

A few days ago, we were visiting with our middle son, Randy, and we got to talking about dogs. He is one of those people who has a detailed memory about almost anything. It's kind of funny, but every time we try to remember something, his dad, David, says, "Call Randy and ask him."

Well today they got on the subject of dogs. Most of us who grew up in the country had a dog we thought was the best ever. Our family had mainly hunting dogs, coon hounds like Old Lightfoot, Minnie, Ribs, Mutley, etc.

Then we had a few just family dogs like Tip and Ole Ring. Each does have their own story, like the time one of their favorites, Mutley, came up missing during a night hunt. They frantically searched for a couple weeks and sadly had about given up hope. Then one day, our youngest son, Eric, heard a sounding faraway bark. Our two nephews, Matt and Mike Bode, were with him. They tracked it down and found Mutley was stuck back in a cave.

Eric had his cousins stay there while he ran home, probably a mile or two through the woods, to get shovels, a hoe and some hot dogs to encourage Mutley to try to get out. They dug her out and she was fine. It must have been a miracle! I can't even stand to think or hear about being stuck in a cave, not able to move, no food or water, etc.

Mutley lived and went on to enjoy many more years of hunting with the boys and their daddy. I can't help but think of a gospel song the Doyle Lawson band, one of my favorite bands, sings. It says in the song, "Help won't come tomorrow, if you give up today, wait a little longer, help is on the way." I should write another story about Mutley!

Also, we had a dog they named Ribs. That dog would climb a tree after a coon. I debated on what picture for the story, and I thought I better put the picture in of our tree climber, since it is so unbelievable. This is Ribs our tree climber in the picture, but today the focus is on my folk's dog Twiggy.

This is the way Randy told the story.

Randy said, "I was thinking about my Grandpa George, and Granny Dorothy's dog, Twiggy.

"While they did have other dogs when I was little, like Old Chief, then they got the most incredible little dog I ever saw. Her name was Twiggy. Now Twiggy was some sort of a little short-haired Terrier, and she was the best hunting dog ever. She understood so well. If I said, 'Let's go get a rabbit,' she ran straight to the dozer pile of brush, where rabbits would hide, and go in and chase out a rabbit. But if I said, 'Let's go get a squirrel,' she would take off excited and pass right by the brush piles, headed for the trees, looking for a squirrel. Hard to believe but true, and then she would tree a squirrel in the blink of an eye. She was such a good tree dog, and we even used her to train our coon hounds. I recall the first raccoon we ever got was with Lightfoot, our black and tan hound, and it was with Twiggy leading the way.

"She also was quite a snake dog. We grew up in the country down on NN south of Fulton, and there were copperheads and rattlesnakes. But if one ever came in the yard, Twiggy eyed it and handled it! Even though she could have got bitten, she wasn't afraid.

"I recall the time when my brother Daniel and I were little, she helped protect us from a huge rattlesnake that was at the edge of Grandpa's and Grandma's yard. I came within an inch of stepping on it, but Twiggy held him at bay until Grandpa shot him with his 12-gauge! I can still hear those rattles singing and Twiggy barking, as Grandma was yelling saying, 'George, be careful!'

"That was 50 years ago, and as all good dogs go, Twiggy got old and died. But I'll always remember what a wonderful little dog she was. Some have their Old Shep or Old Yeller, but we had Twiggy, and she was such a good dog and left us with many great memories."

Thanks Randy, for helping keep memories of Mom, Daddy, and those days alive.