New administrator hopes to support other educators, help them build on strengths 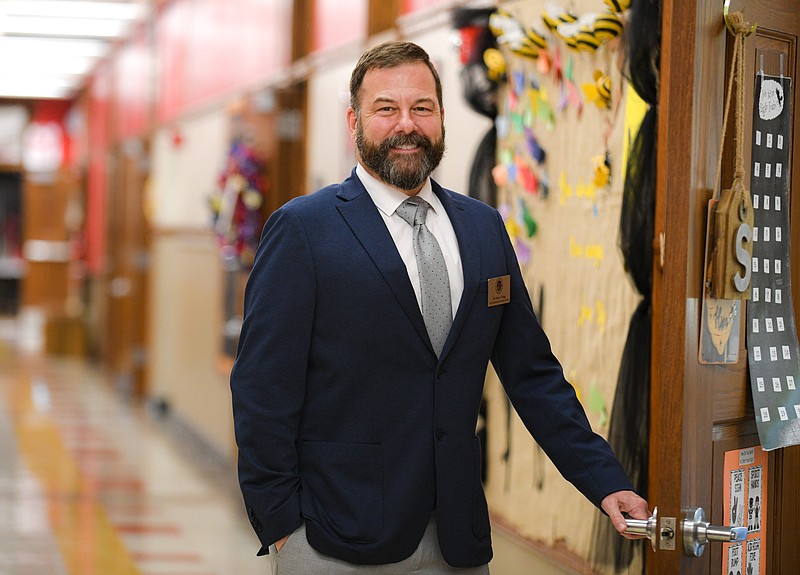 Troy Hogg stands in the hallway at East School. Hogg has accepted the position of assistant elementary superintendent in the Jefferson City Public School District and was at the school for meetings with staff and administrators before the start of the 2022-23 school year. (Julie Smith/News Tribune photo)

The new Jefferson City assistant superintendent of elementary education said he hopes his many experiences have made him a better person and a better educator.

Now Troy Hogg is seeking to bring out the best in others.

Hogg, who was raised near Jefferson City and graduated from Eugene High School, has lived in many places: Westphalia, Sedalia, St. Louis, Kansas City and Japan. He most recently served as an elementary school principal in the Lee's Summit R-7 School District, and he's now returning to the area where he was raised.

While many educators claim to have known they'd be teachers from the start, Hogg said it wasn't like that for him. He planned to be a veterinarian.

"I grew up in the area. My graduating class from Eugene was like 60, and then I went to Mizzou... and I remember walking into like my biology class and there's like 500 people in one classroom," he said. "I'm like, 'This is more than my entire school, my high school, in one room.' It was just overwhelming. It was a lot."

Looking for a change of pace, he transferred to Lincoln University and majored in education, reasoning that since he'd always loved to learn, he should help others do it, too.

He started as a teacher's aide at West Elementary, where he taught science lessons. He eventually ended up in Sedalia, where he learned about the Japanese Exchange Teacher program. Through a connection with a Japanese teacher he had hosted, he was able to visit Japan one summer, which piqued his interest and got him to apply for the JET program.

Hogg spent three years in Japan teaching English. While there, he met and married his wife, Sanae, and the two had their first son, Takashi. They later moved back to Missouri to be closer to family and to keep the cost of living down, and they had their youngest son, Taichi.

Takashi means "heaven" and Taichi means "earth," because, as Hogg said, they were their "little piece of heaven and earth." Sanae and Taichi are currently in Lee's Summit as Taichi finishes his senior year of high school, and Takashi is studying engineering at MU.

Hogg counts himself lucky for his experience.

"I had never been out of the country, nor had I ever flown when I went to Japan," he said. "That was the first hurrah, a big 13-hour flight across the world. But you know what? It was amazing. Who would have thought this kid from Mid-Missouri would end up on the other side of the world, and then I brought back a whole family with me."

Hogg hopes those experiences have shaped him for the better.

Elevating others, though, is what keeps him going.

As assistant superintendent of elementary education, Hogg sees himself as one piece of the puzzle.

"I feel like my biggest role here is to support the principals to be able to do that work, so whatever I can do for them," he said. "I realize that my impact is not as significant as a building leader or a classroom teacher, to be quite honest. They're in the trenches, they're right there with the kids on a day-to-day basis, but I'm going to do whatever I can to make their jobs easier" and get them the support and information they need.

Hogg said he is looking forward to getting to know the staff, students and community and getting into schools, but that is also one of the biggest challenges he faces as a new administrator.

When not in a school building, Hogg can be found playing the fiddle -- a hobby he picked up during the pandemic -- or taking walks and runs around Jefferson City, which are often put on pause as he reads historical plaques and looks at old buildings.

Hogg's historical interests also extend to his family history. He has been involved in tracing his lineage since his was 19 years old and has so far tracked the Hogg family back to 1650. He's also the webmaster for the Cole County genealogy website.

His upbringing near Jefferson City is what built the internal motivation that still fuels him, he said. Hogg said he was instilled with a strong work ethic and never wants to coast through work.