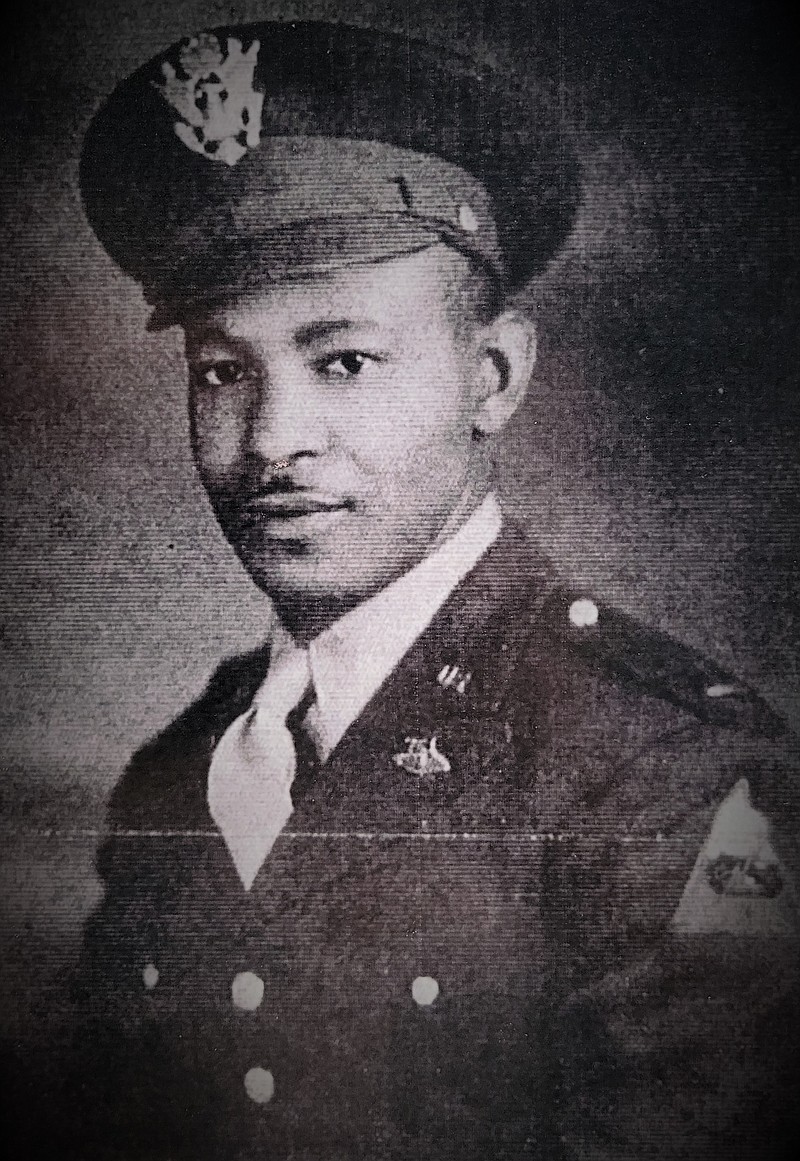 "The Army was an experience unlike anything I've had in my life," wrote Dempsey Travis, an author and African-American veteran of World War II. "I think of two Armies, one black and one white."

During the war, as Travis said, many Black citizens served with distinction in segregated units, fighting for the rights of others overseas while they were themselves being denied many basic freedoms at home. Such stories of dedication in the face of racism reveal the esteemed legacy of notable Missourians such as the late Charles Gates.

It would take decades for Gates to receive the full recognition he deserves, but he will soon be honored for his achievements through his induction into the 2022 class of the Missouri National Guard Hall of Fame.

Born Oct. 9, 1911, in Kansas City, military records indicate Charles A. Gates was employed as a porter by H.T. Poindexter and Son Merchandise Company and lived with his mother when he registered for the draft on Oct. 16, 1940.

Several months later, on April 10, 1941, the 29-year-old received his notice of induction and entered military service with the U.S. Army. Initially he was assigned to the Headquarters and Service Troop, 10th Cavalry, at Fort Riley, Kansas.

Through a mixture of his age and demonstrations of leadership potential, Gates was sent to Fort Knox Kentucky, in the summer of 1942 for Officer Candidate School and received his commission as a second lieutenant. His first experience as a military officer came with his assignment to an all-Black unit that was forced to train under deplorable conditions.

"The 761st (Tank Battalion) was activated April 1, 1942, at Camp Claiborne in Louisiana," explained an article appearing in the Kansas City Star on June 16, 1994. "Gates recalls that black soldiers were assigned to tents instead of barracks."

The newspaper added, "Worse, the tents stood near a sewage treatment plant."

Gates, serving as an assault gun platoon leader with the 761st, underwent extensive training at Camp Hood, Texas. This is where the unit was stationed when they received world of the D-Day landing operations. In the fall of 1944, the battalion revealed its commitment to the war when deployed overseas. They entered the fight Nov. 7, 1944, spending 183 consecutive days in combat.

Samuel Marquis in his book "Soldiers of Freedom: The WWII Story of Patton's Panthers and the Edelweiss Pirates," wrote the 761st -- also known as the "Black Panthers" -- became the first African-American armored unit to serve under General Patton in World War II.

Marquis noted, "During the 761st's combat actions through May 6, 1945, in which they rarely fielded over 1,000 men including support personnel, the tankers destroyed or captured 331 enemy machine-gun nests, 58 pillboxes, and 461 wheeled vehicles; killed 6,246 enemy combatants; and captured more than 15,818 enemy soldiers ..."

The war carried with it many opportunities to showcase one's fortitude in the face of disablement or death. Gates never cowered from confrontation and became the most decorated soldier in the battalion.

On Jan. 9, 1945, after having three tanks under his command severely damaged, he conducted a personal forward reconnaissance in a Jeep armed only with a .50-caliber machine gun. With this, he directed an attack against German defensive positions that were protected by self-propelled anti-tank guns. His valor earned him a Silver Star, and he was later presented a Bronze Star and a Purple Heart.

John Long, the captain of Company B, 761st Tank Battalion, shared his enthusiasm for the performance of his soldiers in the book, "The Invisible Soldier."

"I was and am proud of my tankers," Long said. "They were as good or better than most of the tankers in the whole European Theater. There wasn't a white outfit that wasn't damned glad to have us after our first engagement ..."

Their combat marathon came to an end on May 6, 1945, and Gates later commanded Company C of the 761st. Following the battalion's departure from overseas, he received his discharge from the U.S. Army at Jefferson Barracks on Feb. 28, 1946, and returned to Kansas City.

An executive order by President Harry Truman desegregated the military in 1948. However, it would be years before this became a fully implemented reality within many reserve components such as the Missouri National Guard, which had segregated units into the 1960s.

In the years following World War II, Gates worked full-time for the post office and, in 1949, joined the 242nd Combat Engineer Battalion of the Missouri National Guard, an all-Black battalion. He was named commander of the battalion and eventually rose to the rank of lieutenant colonel prior to his retirement in 1964.

The combat veteran received the honor of serving as national president of the 761st tank Battalion and Allied Veterans Association. Because of his age, he was often affectionally referred to as "Pop" Gates.

"Now the contributions of Gates and other black veterans of several wars will be remembered, thanks to the formation of the Charles A. Gates Branch of the Afro-American Military Historical Association," reported the Kansas City Star on Jan. 29, 1995.

Gates never married nor had any children, and, suffering from diabetes, was cared for in later years by his sister. The 86-year-old died June 13, 1997, and is interred in Mount Moriah Cemetery in Kansas City.

"Success is to be measured not so much by the position that one has reached in life as by the obstacles which he has overcome while trying to succeed," affirmed Booker T. Washington, an American educator whose statement describes well such Missourians as Lt. Col. Gates.

In recognition of his service and sacrifice, Gates will be posthumously inducted into the Missouri National Guard Hall of Fame at Kirksville on Sept. 9. For more information, go online to www.monghf.org.

Jeremy P. Ämick writes on behalf of the Silver Star Families of America.