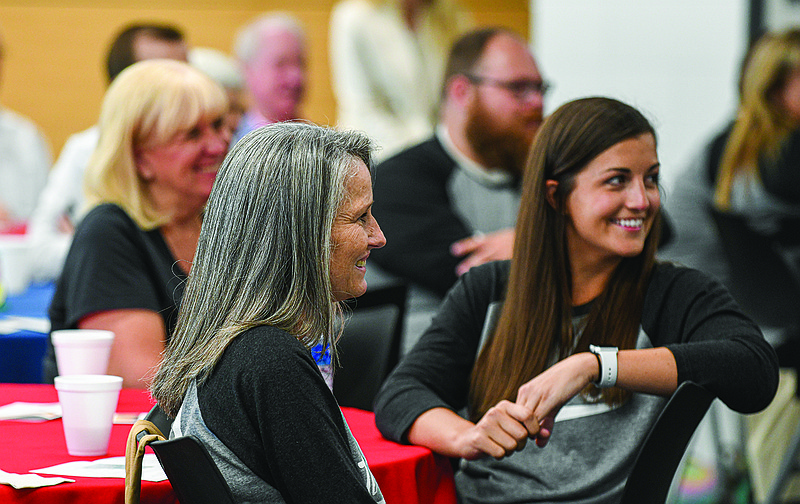 The Rotary Club of Jefferson City welcomed new teachers Tuesday with a luncheon at the Capital City High School cafeteria in an effort to show new educators the community supports them.

Tergin said she loved the shirts.

"I want you to know that Rotary is part of your team," she told teachers.

The event is designed to show teachers Jefferson City has their back.

Rotary president Rebecca Gordon said, "We really want them to feel that they have community support. It's one thing to come into a new position, and you're coming into, of course, a community of teachers, but we want them to know -- outside of education -- that the community of Jefferson City supports them."

Gordon said Rotary supports teachers by highlighting students of the month, showcasing teacher successes and helping with exchange programs throughout the year.

Walton had been through a day and a half of orientation and training as a new teacher, and said it helped her know where she can go for support with different things.

"There's a lot of newness in the district, and so I know sometimes that 'new' is intimidating to people, but 'new' brings great ideas. And so (I'm) just looking forward to the bright direction the district is going in," she said.

A kindergartener said teachers should "love me, smile, be nice, hold my hand" and "help me learn."

A sixth-grader said teachers should be kind, hard workers, patient, willing to teach, organized and have discipline in the class.

A ninth-grader said teachers should be organized, adaptable, a good communicator, disciplined and professional, enthusiastic, and able to challenge students.

McGraw said all of these qualities make a good teacher. He also urged teachers not to be afraid to make mistakes.

He told teachers to "Do you" by filling and arranging their classrooms with things that express their personality. These have the dual purpose of making the teacher feel more at home while also being a way to open up conversations with students.

He also told teachers to be prepared, illustrating his point with a story about how he and his classroom had conspired to make a great impression on his superintendent during his first year by executing a flawless lesson in front of him. The story -- often punctuated by laughter -- illustrated the power of preparation.

Finally, he told teachers to "just do it." Teachers should recognize they will have successes and failures, but it is important to keep in mind they will get through it, he said.